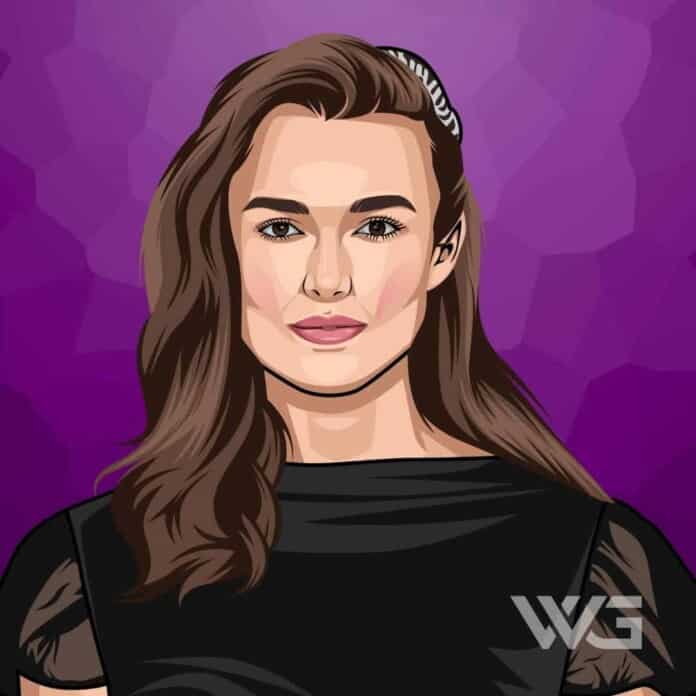 What is Keira Knightley’s net worth?

As of February 2023, Keira Knightley’s net worth is approximately $80 Million.

Keira Knightley is an English actress from London. She is the recipient of an Empire Award and has been nominated for two BAFTA Awards, three Golden Globe Awards, and two Academy Awards.

Keira Christina Knightley was born on the 26th of March, 1985, in Teddington, London. Keira Knightley is the daughter of Will Knightly, a TV actor, and Sharman Macdonald, a renowned playwright.

She made her television debut in ‘Royal Celebration’, which was aired in 1993. After acting in the television film ‘A Village Affair’ in 1995, she portrayed the role of a German Princess in ‘The Treasure Seekers’.

In 2002, she acted in ‘Pure’, a British film about drug addicts. In the same year, she portrayed the role of Lara in the television mini-series ‘Doctor Zhivago’.

Her film ‘King Arthur’ was released in 2004. This film presents Knightley playing the character of Guinevere, a Celtic warrior. Unfortunately, the film failed at the box office.

After acting in the film ‘Atonement’, she appeared in ‘The Duchess’, which released in 2008. Her portrayal of the character of 18th Century English aristocrat in this film earned her instant fame.

She acted in ‘Seeking a Friend for the End of the World’, a comedy film in 2012. In the same year, she played the lead role in the romantic drama ‘Anna Karenina’. Her film ‘Jack Ryan’ will release in 2013.

Here are some of the best highlights of Keira Knightley’s career:

“The thing about great fictional characters from literature, and the reason that they’re constantly turned into characters in movies is that they completely speak to what makes people human. They’re full of flaws as much as they are full of heroics. I think the reason that people love them and hate them so much is that, in some way, they always see a mirror of themselves in them, and you can always understand them on some level. Sometimes it’s a terrifyingly dark mirror that’s held up. ” – Keira Knightley

“I’m a tomboy beanpole? I can’t use a computer, so maybe I’m a bit out of the loop. The beanpole bit, is that good? Can you be a sexy beanpole?” – Keira Knightley

“I think I always disappoint people because they always expect someone very pretty. Very done. There’s so much pressure to be thin, blonde and busty. I’m skinny, but even I couldn’t fit into some of the clothes in L.A! In a funny kind of way, I think you create it yourself. I think it’s much better to go with the flow and embrace your body, whatever shape it is, and just be happy.” – Keira Knightley

“All through my life what I’ve loved doing is watching movies. I love the escapism of film, I love stories. So it is incredible to be able to be in them as much as I am, to see them from the first stitch in a costume to the end product.” – Keira Knightley

“You already feel unsure of yourself, and then you see your worst fears in print. It really knocked me – which is why, I think, I was working, working, working, because I was trying to run away from the fact that I thought I couldn’t do it.” – Keira Knightley

Now that you know all about Keira Knightley’s net worth, and how she achieved success; let’s take a look at some of the best lessons we can learn from her:

Although it might not always feel like it, life is ridiculously short. It probably wouldn’t mean much or be worth much if it lasted forever. Because it’s so short, with the limited time that you have.

2. Due To Past Failures

Usually, due to past failures, most people settle for a life that’s convenient or comfortable. Whatever dreams they had when they were full of hope and wonder started to diminish as they stepped into the real world and constantly got knocked around.

Life is tough and for people who have the courage to continue pursuing the life they want, there will be even more setbacks and challenges waiting for them. For this reason, most people would rather go for something easier. It may be less exciting but at least the chances of pain will be much lower.

How much is Keira Knightley worth?

Keira Knightley’s net worth is estimated to be $80 Million.

How old is Keira Knightley?

How tall is Keira Knightley?

Keira Knightley is a British actress and model. She is well-known for her films like ‘Bend It Like Beckham’ and ‘Pirates of the Caribbean: The Curse of The Black Pearl’.

Apart from acting, she has done modeling assignments for a number of famous brands. She is a recipient of the Golden Globe award, she was also nominated for an Academy Award for her stellar performance in the film ‘Pride and Prejudice’.

What do you think about Keira Knightley’s net worth? Leave a comment below.