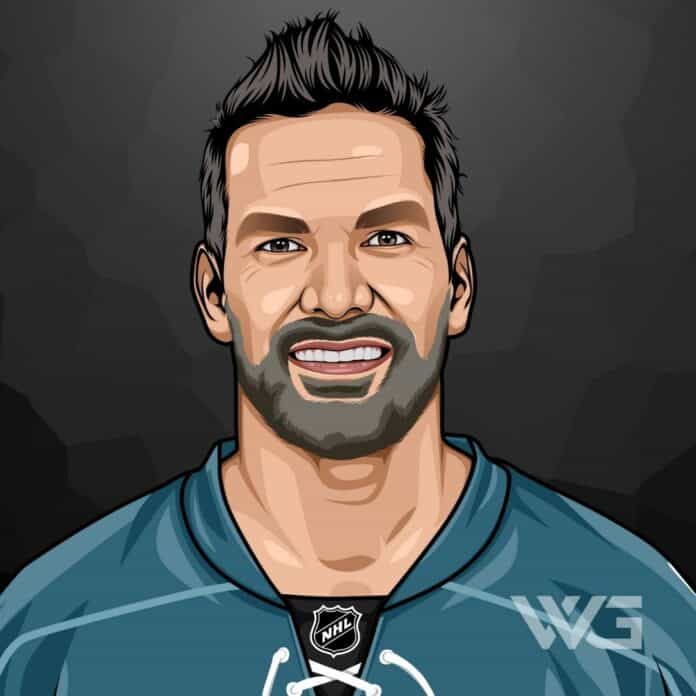 What is Dan Boyle’s net worth?

Daniel Denis Boyle has played for the Florida Panthers, the Tampa Bay Lightning, the San Jose Sharks, and the New York Rangers as an undrafted defenceman, earning millions throughout his career.

While he retired in 2016, Boyle has left a lasting legacy on the ice that won’t soon be forgotten by fans.

While not much is known about his childhood, we do know that he played junior hockey for the Gloucester Rangers in the Canadian Junior Hockey League and eventually signed up to play U.S. college hockey at the University of Miami.

During his collegiate career, Boyle distinguished himself quickly, making the First-Team All-Rookie team in 1994 and the All-CCHA First Team in 1996.

However, despite his distinguished college career, Boyle went undrafted in the NHL Entry draft after the four years he spent playing college hockey, largely due to his small size, which turned recruiters off.

Although he wasn’t drafted, Boyle joined the Florida Panthers as a free agent in 1998 and, by the next year, had earned All-Rookie Team honors and Second Team All-Star honors in 1999 and 2000.

For the 2000-2001 season, Boyle was granted a full-time spot on the roster, and while he scored 22 points, the following year, he was traded to the Tampa Bay Lightning in exchange for Martin Tuma.

After completing his first season with the Lightning, Boyle signed another one-year contract and, in 2004, helped them earn win the Stanley Cup championship.

In 2006, Boyle earned Second Team All-Star Honors but was set back by an injury the next year, which left him with three severed tendons in his wrist.

While he underwent surgery, Boyle could not return to the ice until 2008, and while he signed an eight-year contract extension the same year, in July, he was traded to the San Jose Sharks, with Boyle claiming he was pressured to waive his no-trade clause.

During his time with the Sharks, Boyle continued to play well, although he felt slighted by his previous team and its new management.

Boyle would stay with the San Jose Sharks until he was traded to the New York Islanders in 2014, though after being unable to come to terms with them, Boyle became a free agent once more and signed a two-year contract with the New York Rangers.

Two years after joining the Rangers, Boyle didn’t seek an extension and instead announced his retirement, having played 1,093 games throughout his NHL career.

Despite not being one of the richest hockey players in the world, Dan Boyle has earned a small fortune as a free agent in the NHL.

Boyle has consistently earned more with every contract he’s signed, and his most significant earnings include:

While he may not have earned as much as Wayne Gretzky, Dan Boyle still earned an impressive amount yearly during his tenure with the NFL.

Dan Boyle has two daughters, Eastin and Wesley, with his ex-wife Amber, who he married in 2008 and divorced in 2020.

In a 2017 interview with the NHL, Boyle talked about enjoying his time as a stay-at-home dad, and while he isn’t opposed to returning to the rink, he wants to spend as much time with his kids as possible.

Unfortunately, Boyle isn’t active on any social media platforms, but if he returns to professional hockey, we may see him open an account to interact with his fans.

Dan Boyle has been honored numerous times throughout his long career in the NHL.

However, some of his accolades have been more significant than others.

Here are some of Dan Boyle’s most impressive achievements:

Due to his skills as a defenceman, Dan Boyle has enjoyed a lot of significant promotions and honors throughout his time with the NHL.

How Does Dan Boyle Spend His Money?

Although we don’t know much about how Dan Boyle spends his money, we do have some information about the homes he has owned, which gives us an insight into his lavish lifestyle.

In 2009, Boyle spent $4 million on a home in the Bay Area that featured a stunning courtyard, a huge outdoor pool, a large gourmet kitchen, multiple fireplaces, and a billiards room.

Another home he owns is located in Monte Sereno, and while Boyle originally tried to sell the property for $5.9 million, he later placed it up for rent in 2014 for $15.5k per month.

Boasting seven bedrooms, seven bathrooms, a gorgeous patio, and a custom pool and spa, this home certainly is a fantastic getaway for those who can afford it.

Though we have no information on whether or not Boyle found any renters willing to throw down the money necessary to rent this grand estate.

Dan Boyle has reached several significant milestones during his time with the NHL.

However, some of his achievements have bolstered his success more than others.

Here are some of the best highlights of Dan Boyle’s career:

Although he may not be as well-known as Pavel Bure, Boyle has enjoyed a lot of important moments throughout his career.

Dan Boyle isn’t afraid to talk about his NHL career in the handful of interviews he’s done.

Despite being relatively private, Boyle has provided fans with some important insights into his personality and how he approached his games.

Here are our favorite quotes from Dan Boyle:

There are many great things we can learn from Dan Boyle about success.

Now that you know all about Dan Boyle’s net worth, we can take a look at what he can teach us about reaching our own goals.

Here are some of the best success lessons to learn from Dan Boyle:

If you want to become successful, one of the first things you’ll have to do is learn what the value of your skills is.

If you know your worth, you’ll be much less likely to be taken advantage of by others trying to get ahead and chase their goals.

2. Don’t Let Setbacks Hold You Back

There will always be setbacks, but you can’t let them hold you back when they happen, or you’ll never reach your goals.

When things go wrong, learn from them and keep moving forwards smarter and more aware.

No matter who you are, there will always be haters, but instead of letting them tank your self-esteem, you should turn them into motivation.

There is no better feeling than succeeding while your haters lag behind and proving that all their vitriol was just wasted energy.

Dan Boyle has played for many different teams during his career and earned millions for his talents.

While he has since retired to focus on his family, his legacy and accomplishments stand out in NHL history.

Be sure to check back often to stay up-to-date on Dan Boyle’s net worth and his future ventures.

What do you think about Dan Boyle’s net worth? Leave a comment below.