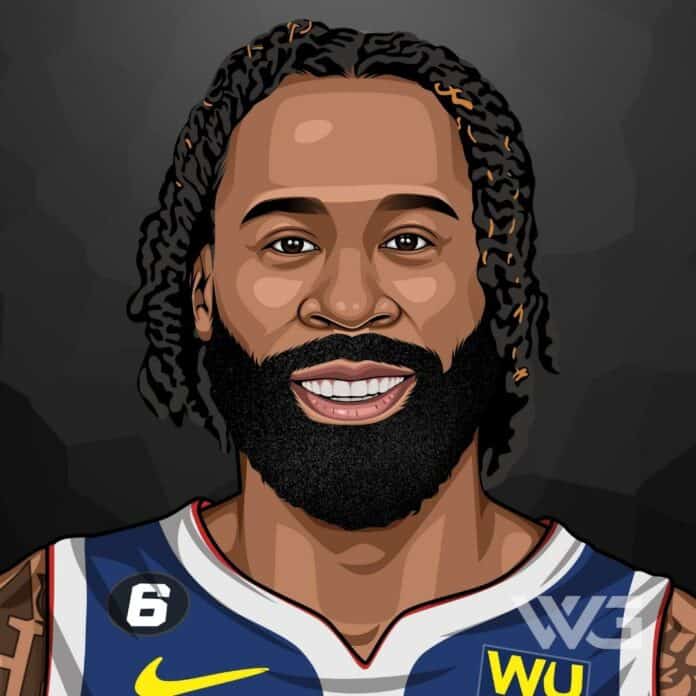 What is DeAndre Jordan’s net worth?

DeAndre Jordan has played for many teams throughout his career and continued to earn millions as one of the best players on the court.

Since he has shown no signs of retiring any time soon, we can only expect to see his wealth continue to increase as he remains in the NBA.

As of January 2023, DeAndre Jordan’s net worth is estimated to be $80 Million.

Hyland Deandre Jordan Jr. was born on July 21, 1988, in Houston, Texas, where he would later attend Episcopal High School and begin playing basketball.

During his junior year, Jordan transferred to Christian Life Center Academy, where he continued playing during his senior year and set the school’s record for the most blocks in a single game.

After graduation, Jordan was rated as a #8 prospect, and many schools attempted to recruit him, including Florida, Florida State, Texas, Texas A&M, LSU, Indiana, and Kentucky.

Jordan opted to attend Texas A&M, where he earned a spot on the Big 12 All-Rookie Team and declared for the NBA draft after just a year of playing for the university.

In the NBA, Jordan was selected as the 35th overall pick by the Los Angeles Clippers, and in his first season, he excelled on the court, even achieving 10 dunks, something that only Dwight Howard and Shaquille O’Neal had done before.

Jordan signed multiple extensions with the Clippers, including a 4-year extension in 2011 for $43 million and another in 2015 for $80 million, a figure that the clippers matched to retain Jordan after the amount was offered by the Mavericks to join them.

After playing for the Clippers from 2008 to 2018, Jordan did join the Dallas Mavericks for a single season but left without signing an extension to join the Brooklyn Nets.

In 2021, Jordan signed with the Los Angeles Lakers in September, but he was waived in March of 2022, causing him to sign with the Philadelphia 76ers for the remainder of the season.

However, Jordan didn’t opt to re-sign with the 76ers, and in July of 2022, he signed with the Denver Nuggets, who he has remained with since.

While he’s not among the richest NBA players in the world, DeAndre Jordan has earned a lot of money throughout his career.

Additionally, since he is still active in the NBA, we expect that his earnings will only continue to increase in the future.

Although he’s not the richest player in the game, he has played for many of the richest NBA teams, ensuring he’s always maintained a large annual salary.

DeAndre Jordan isn’t married but is rumored to be dating Bethany Gerber, the ex-girlfriend of his former teammate Blake Griffin.

Outside of basketball, Jordan is known to be a devout Christian, and he has a tattoo of Matthew 5:4-5 on his chest, as well as a cross on his arm, and Philippians 4:13 on his stomach.

He also has his own official website where he promotes the DeAndre Jordan Treehouse Giving Foundation, his fashion endorsements, and media appearances.

DeAndre Jordan has won many awards throughout his career as a professional basketball player.

While all of his honors have been important, some have boosted his wealth and fame more than others.

Here are some of the most significant awards from DeAndre Jordan’s career:

Jordan may not be as well-known as Kobe Bryant or LeBron James, but he certainly has won many remarkable distinctions.

How Does DeAndre Jordan Spend His Money?

In 2015, Jordan paid $12.7 million for a brand new mansion in the Pacific Palisades neighborhood of L.A., though he sold it a year later for only $11 million for reasons never made public.

After selling his initial mansion, Jordan paid $5 million for a home in Malibu but then did something completely unexpected several years later.

For whatever reason, DeAndre bought a new mansion in Malibu for $10 million and sold his previous one for $5.7 million.

However, a year later, in 2020, Jordan listed his newest Malibu mansion for sale with an asking price of $9.95 million, about $50k less than what he initially paid for it.

While we’re not sure of the reason behind DeAndre’s interesting real estate choices, we suppose if you have a net worth like his, spending millions on new mansions every few years is the equivalent of buying a new pair of shoes for most people.

DeAndre Jordan has reached many important milestones on the road to success.

Despite all of his achievements being important, some have been more beneficial to his career than others.

Here are some of the best highlights of DeAndre Jordan’s career:

DeAndre Jordan has enjoyed a very long and exciting career, but while these milestones are important, he isn’t done making history quite yet.

DeAndre Jordan doesn’t hesitate to share his thoughts about basketball and his NBA career.

During many interviews, Jordan has given fans plenty of insight into how he’s achieved success both on and off the court.

Here are our favorite quotes from DeAndre Jordan:

There is a lot we can learn from DeAndre Jordan and his impressive NBA career.

Now that you know all about DeAndre Jordan’s net worth, we can take a closer look at what he can teach us about reaching our own goals.

Here are some of the best success lessons to learn from DeAndre Jordan:

1. Be Good To Yourself

If you’re trying to become successful, you’re not going to get far if you don’t treat yourself right.

Whether that means changing your sleep schedule, eating better, or finding time to exercise, your well-being should always be your number one priority.

If you want to be successful, you need to learn how to earn the respect of those around you.

This doesn’t mean you have to go above and beyond to be everyone’s friend, but by working hard and providing valuable skills, you can earn the respect needed to gain further opportunities.

3. Know What You Bring To The Table

To become successful, you need to identify your strongest skills and work to hone them as much as possible to help yourself stand out.

Once you have set yourself up, you can start creating a lasting reputation that will help you better achieve your goals.

DeAndre Jordan is an American professional basketball player who has earned millions for his skills on the court.

While he’s been playing since 2008, Jordan has shown no interest in retiring, so we expect his wealth will only continue to increase in the coming years.

Make sure to check back often to stay up-to-date on DeAndre Jordan and his growing net worth.

As of January 2023, DeAndre Jordan’s net worth is estimated to be $80 Million.

What do you think about DeAndre Jordan’s net worth? Leave a comment below.

What is Zion Williamson's net worth? Introduction  As of ,...