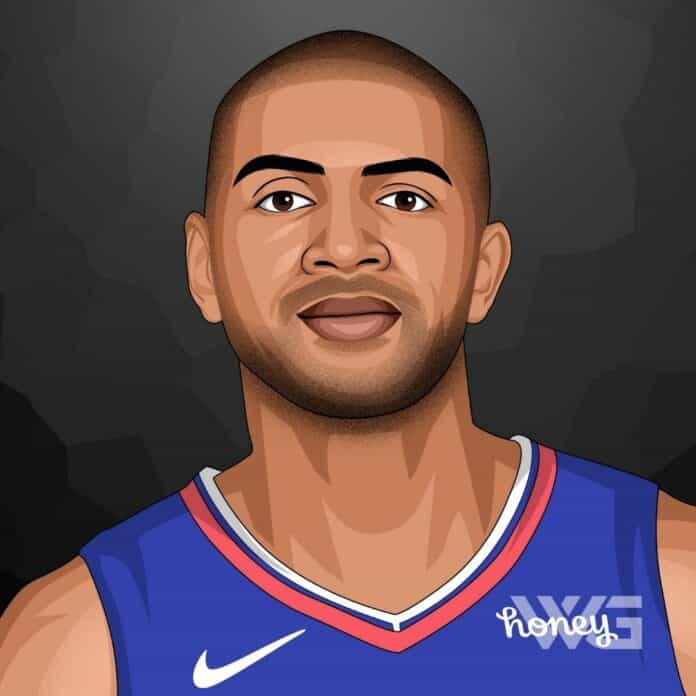 What is Nicolas Batum’s net worth?

Nicolas Batum is a French professional basketball player who is currently a forward for the NBA’s Los Angeles Clippers.

Batum was the 25th overall selection in the 2008 NBA Draft by the Houston Rockets and was subsequently traded to the Portland Trail Blazers.

Nicolas Batum was born December 14, 1988 in Lisieux, France and grew up in his native country.

Batum’s father Richard was a professional basketball player from Cameroon that was playing in France when he tragically passed away on the court with Batum in attendance.

To honor his father, Batum began playing basketball himself, and turned professional as a teenager when he signed with Le Mans Sarthe.

Batum remained in France until 2008 when he was selected 25th overall by the Houston Rockets in the NBA Draft.

On the same night he was drafted, Batum was traded to the Portland Trail Blazers and quickly found himself in the starting lineup where he averaged 5.4 points and 2.8 rebounds per game.

Batum would play seven seasons for the Trail Blazers, and overall averaged 11.2 points, 5.1 rebounds, and 3.0 assists per game before being traded to the Charlotte Hornets in June 2015.

The trade allowed the Hornets to team Batum up with players including Kemba Walker in hopes of winning a championship.

The first two seasons in Charlotte were solid for Batum and he helped the team reach the NBA Playoffs once in his five seasons with the Hornets but lost out to Dwyane Wade and the Miami Heat..

Early in the 2020-21 NBA season, Batum was waived by the Hornets as his production started to decline, but he was picked up by the Los Angeles Clippers and has been with the team ever since.

Nicolas Batum spent the first four years of his career with his earnings toward the bottom of the NBA, but then shot toward the top by the end of the 2010s.

At his peak, Batum was one of the highest-paid players in the NBA, earning over $25 million per year with his Charlotte Hornets contract.

Currently, Batum finds himself behind the likes of teammates Paul George and Kawhi Leonard in terms of yearly salary.

The figures of Nicolas Batum’s earnings are based on his publicly announced contracts, but are not guaranteed to be 100% accurate.

Batum is in the first year of his two-year contract with the Clippers, and is scheduled to make a fully guaranteed $11.7 million in 2023-24.

Should Batum continue to play after his contract, he isn’t likely to earn a massive deal, but should still be able to make a couple of million.

After playing out his rookie contract, Nicolas Batum signed a massive deal that made him one of the richest NBA players in the world for years.

Batum’s net worth skyrocketed over the course of the 2010s thanks to the contract, and the international superstar is now a nine-figure man.

The figures of Nicolas Batum’s net worth are estimated in regard to his NBA salaries and endorsements and are not guaranteed to be 100% accurate.

Here’s a breakdown of Nicolas Batum’s annual net worth:

Batum doesn’t need to play another minute in the NBA to have plenty of money to retire with thanks to the large contracts he’s signed.

Set to add millions more in 2023-24, Batum may consider retirement from the NBA following the season as he’s earned much more than many could dream of making.

Nicolas Batum is the son of Sylvie Batum and the late Richard Batum who sadly passed away during a game when Nicolas was only two years old.

Batum has a younger sister named Pauline, he has been married twice, and he has one child from his first marriage.

Melanie Pimentel is Batum’s first wife, and the couple had a son named Ayden before their divorce, now Batum is married to Aurelie Batum.

Even as a teenager, Nicolas Batum was earning awards while playing in Europe as it was clear he was cut out to make the move to the United States.

On top of all of the accolades he earned in Europe, Batum has done well for himself while playing in the NBA.

Here are some of Nicolas Batum’s top awards and achievements during his career:

Nicolas Batum is getting toward the end of his career and it’s unlikely he’ll earn many more individual awards.

However, Batum wants to win an NBA Championship, which is a team award, but each player gets a ring to commemorate the achievement forever.

How Does Nicolas Batum Spend His Money?

At one point in his career, Nicolas Batum was one of the richest NBA players in the world thanks to his high salary and has plenty of cash to spend.

After signing his massive contract with the Charlotte Hornets, Batum purchased a $3.7 million home in the area that features three floors and 10,000 square feet.

Previously, Batum had owned a house in Oregon while playing with the Trail Blazers, and listed the beautiful 6,800 square-foot home for sale at $2.5 million.

As for his taste in cars, he doesn’t have one of the most expensive cars in the world, but Batum prefers the Mercedes-Benz G-Wagon that’s estimated to be around $180,000 brand new.

Nicolas Batum was destined for stardom at a young age, and went down the same path of professional basketball that his father did.

Batum has accomplished quite a bit on an international scale, with achievements in both Europe and the United States.

Here are some of the best highlights of Nicolas Batum’s career:

There is one major highlight that Batum is hoping to add to his NBA career, and that’s winning an NBA Championship.

Batum was close to getting to the NBA Finals for the first time in his career, but his Los Angeles Clippers lost to the Phoenix Suns in the 2021 Western Conference Finals.

While there are some NBA players that are willing to get in front of a microphone and talk nonstop, it’s more difficult for Batum.

With his native language being French, it can be hard to get a quote from Batum, but he has had a few things to say throughout his career.

Here are our favorite quotes from Nicolas Batum:

Nicolas Batum is one of the more veteran players in the NBA and has seen it all through his journey that has spanned all the way from Lisieux, France.

The former French professional basketball player turned NBA star has been a valuable player for several teams during his career, and has just as many off-the-court experiences as he does on-the-court.

Now that you know all about Nicolas Batum’s net worth, let’s take a look into his life and figure out what he’s learned over the past 33 years.

Here are some of the best success lessons to learn from Nicolas Batum:

1. Live In The Moment

Nicolas Batum was only two years old when he attended a basketball game to watch his father play, but tragedy struck on the court.

His father, Richard Batum, suffered an aneurysm during the game and passed away in front of the young Nicolas and a capacity crowd.

Because of that, Nicolas Batum knows that every moment on Earth is precious, and you have to live in the present because you don’t know how long the future will be.

Like a lot of great European players, there was always the option to stay in the continent and stick around as a professional basketball player, dominating the competition.

Instead, Nicolas Batum decided that he wanted to test his skills against the most elite players in the world, moving to the United States to play in the NBA.

The gamble has paid off nicely for Batum, who has been in the league for well over a decade and has earned tens of millions throughout his career.

When you fail to live up to high expectations, it can be devastating to your mental health, and Nicolas Batum went through that after his time in Charlotte.

Batum found himself in a tough place mentally after leaving the Hornets and was about to give up on basketball before he received word that coach Tyronn Lue wanted to bring him to the Clippers.

Nicolas Batum said that Lue saved his life, and is forever grateful for receiving another chance in the NBA, and the two have formed a tight bond.

Nicolas Batum could’ve stayed away from basketball after his father’s tragedy, but instead chose to follow in his footsteps.

After establishing himself as one of the best players in Europe, Batum showed that he belonged in the NBA, as well.

Now in his mid-30s, Batum has had a fine career and hopes to cap it off with an NBA Championship.

What do you think about Nicolas Batum’s net worth? Leave a comment below.