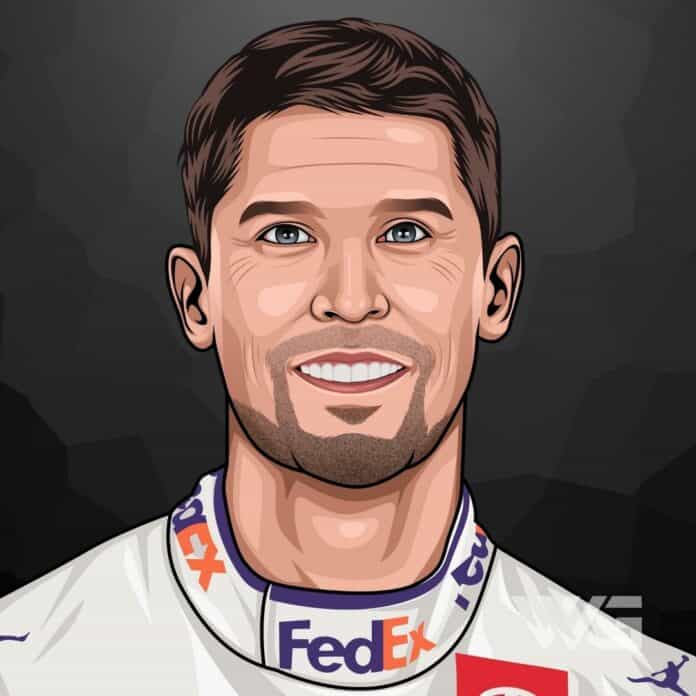 What is Denny Hamlin’s net worth?

Denny Hamlin became the third highest-paid driver in NASCAR in 2020, and throughout his career, he has earned millions.

Since he is still racing today, we expect his fortune to only continue to increase, possibly making him one of the richest racers in the industry.

As of February 2023, Denny Hamlin’s net worth is estimated to be $65 Million.

James Dennis Alan Hamlin was born on November 18, 1980, in Tampa, Florida, to Dennis and Mary Lou Hamlin, though he spent most of his childhood in Chesterfield, Virginia.

At his first stock car race in 1998, Hamlin won the pole position and the race at Langley Speedway, and the same year he competed in the Grand Stock division, progressing to Late Model Stock Cars in 2000.

In 2004, while competing with Late Models full-time, Hamlin signed a driver development contract with Joe Gibbs Racing and moved on to NASCAR.

Denny Hamlin started his NASCAR career competing in five Craftsman Truck Series races, and in 2005 he won his first NASCAR Cup Series race at the Pocono 500.

Due to his success on the track, Joe Gibbs Racing signed him full-time, and in 2007, he won his third NASCAR Cup Series race at the Lenox Industrial Tools 300, followed by a race at the Daytona 500, where he placed 43rd.

At Homestead in 2013, Hamlin won the season finale against Dale Earnhardt Jr., overtaking him during the final 30 laps.

While he continued racing well, winning numerous Cup Series titles, his biggest victories came in 2015 when he won the Sprint All-Star Race and placed 4th at the Daytona 500.

In 2016, Hamlin’s persistence paid off when he clinched his first win at Daytona International Speedway, narrowly beating out Martin Truex for the title.

Hamlin would find victory again at the Daytona International Speedway in 2019, though he was shortly after rushed to the emergency room after the Spring Dover Race for carbon monoxide poisoning caused by an accident on the track that allowed fumes into the cabin.

The same year, Hamlin also suffered from a torn labrum in his left shoulder that he had surgically repaired after the 2019 season.

Fortunately for Hamlin, 2020 brought another victory at the Daytona 500, as well as wins at Pocono, Homestead, Darlington, and Kansas, which earned him quite a bit of renown and money.

The following year, Hamlin won the Southern 500 for the third time and three weeks later found victory in Las Vegas as well.

Unfortunately, 2022 didn’t go as smoothly, and Hamlin found himself in mandatory sensitivity training after making fun of Kyle Larson in a tweet.

Hamlin also became the first NASCAR Cup Series winner to be disqualified since 1960 due to an irregularity in his car’s dimensions during the race.

Denny Hamlin falls just shy of being one of the richest racing drivers in the world, but with his steadily increasing net worth, he may very well top the list in the future.

While we don’t have a record of everything Hamlin has earned from his wins, we do have some information about what he has made in the past couple of years.

He may not make as much money as Valentino Rossi, but Denny Hamlin sure isn’t hurting for money regarding his NASCAR earnings.

In 2021, Jordan Fish announced the couple’s breakup in a series of tweets that Hamlin was tagged in, though he has never officially commented on the topic.

Denny Hamlin also has his own official website where he promotes his foundation and his merchandise.

Denny Hamlin has won many races over the course of his NASCAR career.

However, some of his race victories have been more significant than others for their prestige and notoriety.

Here are some of the best racing victories from Denny Hamlin’s career:

While he may not have won as many races as Eddie Jordan, he is well on his way to becoming one of the most accomplished stock car drivers.

How Does Denny Hamlin Spend His Money?

Denny Hamlin has more than enough money to buy almost anything he could ever want, and fans can get a glimpse of his lavish lifestyle by checking out his house.

Construction started on Hamlin’s huge Lake Norman home in 2014 and finished two years later when all of the nuances that the pro golfer wanted were in place.

This home is 30,000 sqft and comes with a glass-walled garage for his race cars, a basketball court, a bowling alley, over two dozen TVs, and a glass elevator.

If that wasn’t enough, there is also an indoor putting green, an outdoor helipad, and a custom infinity pool.

Oh, and that’s just all the fun accessories, not accounting for his luxury bedrooms, giant kitchen, and huge bathroom with dual granite and glass showers and oversized soaking tub.

While Hamlin hasn’t made public how much this massive home cost, we certainly know it didn’t come cheap!

Denny Hamlin has reached many milestones in his NASCAR career.

That said, some have helped boost his fame and fortune more than others.

Here are some of the best highlights of Denny Hamlin’s career:

Although Hamlin has reached many incredible milestones that have elevated him to NASCAR fame, these are by far his most notable.

Denny Hamlin doesn’t shy away from discussing his career and how he tackles his races.

During many interviews, Hamlin has shared insight into his racing style and personality.

Here are our favorite quotes from Denny Hamlin:

There are many great lessons to be learned from Denny Hamlin and his successful racing career.

Now that you know all about Denny Hamlin’s net worth, we can take a look at what he can teach us about reaching our own goals.

Here are some of the best success lessons to learn from Denny Hamlin:

1. Take Care Of Yourself

To reach your goals and achieve success, you must first take care of your physical and mental health.

When you take care of yourself, you’ll be much more likely to reach even your loftiest goals.

2. Don’t Bring Yourself Down

Everyone messes up or fails at one point or another, but if you let it bring you down, you will never be able to succeed and move past it.

When you make a mistake, acknowledge it, but move on and do your best to learn from the experience so that it doesn’t happen again.

It’s tempting to spend all of your time working hard when you’re trying to make something of yourself.

However, if you forget to have fun, you’ll only burn yourself out before ever getting off the ground.

Denny Hamlin is one of the highest-paid drivers in NASCAR, and throughout his impressive career, he has brought home millions.

Despite having been racing since 2004, Hamlin isn’t interested in retiring yet, so we expect his net worth to continue increasing with every year he continues to compete.

Be sure to check back regularly to see just how much Denny Hamlin’s fortune can increase!

As of February 2023, Denny Hamlin’s net worth is estimated to be $65 Million.

What do you think about Denny Hamlin’s net worth? Leave a comment below.