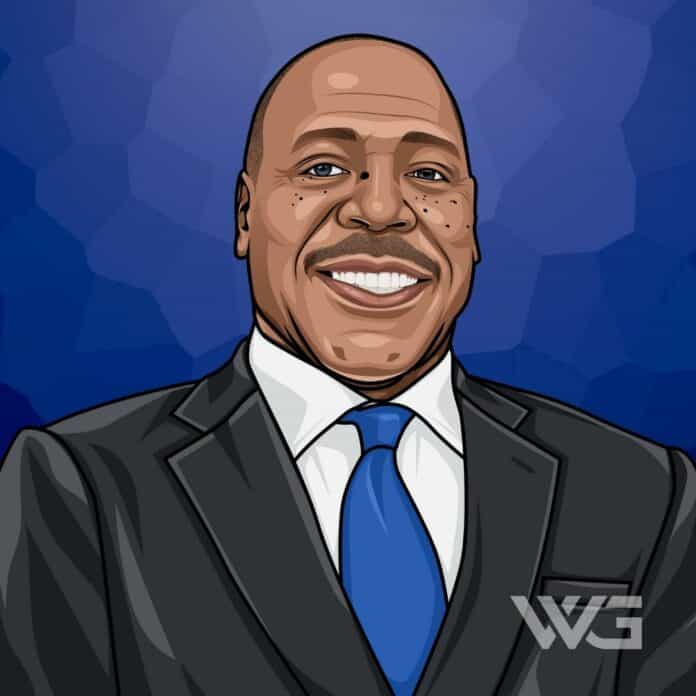 What is Vinnie Johnson’s net worth?

Vinnie Johnson, also known as the “The Microwave”, started his career in basketball in 1979, going on to play for the next decade, retiring in 1992.

He is considered one of the best basketball players in basketball history due to his ability to score and “heat” his team’s offense the moment he came off the bench.

Johnson became wealthy not only from playing basketball but also through his work as a sports analyst and as the owner of a successful automobile supply company.

As of November 2022, Vinnie Johnson’s net worth is estimated to be $400 Million.

He and his brother were passionate about sports from a young age, with his younger brother Eric going on to play for the NBA as well.

He quickly became the star of his school’s basketball team and led them to the NJCAA National Tournament during the 1976 season.

With his already impressive achievements as a young player, he was named a junior college All-American.

After his successful period with the team, he transferred to Baylor University.

He became their best player ever after beating the record for most points in a single game, with a 50-pointer against TCU.

It was no surprise after his university record that he was 7th chosen by the Seattle Supersonics at the 1979 NBA draft. This marked the beginning of his future successful basketball career.

After 2 years of playing for the Seattle Supersonics, Vinnie was traded to the Detroit Pistons.

He played 10 seasons for the Detroit Pistons, where he earned the name “the Microwave”. He also earned the nickname “007” after scoring the winning score with 0.7 seconds left on the clock in a match against the Portland Trailblazers.

Vinnie Johnson joins other famous players like Dennis Rodman, Grant Hill, Andre Drummond, and Chauncey Billups who have all played for the Detroit Pistons.

He eventually left the Detroit Pistons to join the San Antonio Spurs. He had a successful season with them until being defeated by the Phoenix Suns, which resulted in Vinnie retiring from basketball in 1992.

Even though he retired from playing basketball, Vinnie still didn’t feel like his career was over, continuing as a sports analyst.

During his automotive career, he also served as the Chairman of the Board of Directors for the joining ventures of PASA Modules and JL Automotive.

Vinnie Johnson joins the list of some of the richest athletes in the world, who’ve made a huge success in their second career.

While Vinnie Johnson didn’t earn a huge income during his years in the NBA, it was nothing compared to what he earned as the founder of his company.

The Piston Group generates revenues of over US$3 billion a year, and as the chairperson and CEO, Vinnie has become enormously wealthy from his investment.

While the  Piston Group is a privately held company, with no publicly declared financials, Vinnie Johnson’s income is estimated to be in keeping with similar-sized entities in the industry.

With sources estimating that Vinnie Johnson left the NBA with a net worth of approximately $5 million, he’s now considered one of the richest NBA players ever.

Vinnie is worth as much, if not more than Shaquille O’Neal’s approximately $400 million fortune.

Here’s a breakdown of Vinnie Johnson’s annual net worth:

Given the growth of his company and the acquisitions they’ve made over the years, we are sure that Vinnie Johnson’s wealth will continue to grow as his group expands.

Vinnie prefers to keep his personal life private, but what we do know is that he had a relationship in the past with Nina Hartley.

Currently, it seems that the basketball legend is still single and chooses to spend his time managing his company.

You can however, follow what he is doing by visiting his official company website for the latest developments in his business life.

Vinnie Johnson’s career was defined by his ability to make winning plays within minutes of hitting the court after being called off the bench.

However, after he retired from basketball, Vinnie set some other impressive records by building one of the biggest personal fortunes of any professional athlete in the world.

Here are some of the more memorable moments from Vinnie Johnson’s career:

Vinnie Johnson may not have made the biggest contribution to the NBA, but his name will go down in history as one of its wealthiest members.

His ability to manage and create a large, world-class manufacturing business is one of the greatest success stories in sporting history.

How Does Vinnie Johnson Spend His Money?

Vinnie spent a lot of time and money due to running into trouble with the Michigan Minority Supplier Development group.

Fortunately, he did not lose this battle. Otherwise, he would’ve lost billions on potential business for his company.

The outcome of Vinnie Johnson suing the Michigan Minority Supplier Development organization is that his business retains its “Black-Owned and Operated” status pending further litigation.

Being in the auto industry, Vinnie naturally drives some of the most expensive cars in the world, and now supplies Toyota, Ford and GM with various parts.

Vinnie Johnson was a talented basketball player who parlayed his income from the NBA into one of the most successful businesses in the American auto industry.

His vision and managerial abilities have made him one of the most successful professional athletes turned businessmen, ever.

Here are some of the best highlights of Vinnie Johnson’s career:

Unlike many sportsmen before him, Vinnie Johnson was able to hang on to the money he made in professional sports and create a business empire.

He continues to build his businesses, acquiring additional companies and securing international contracts to supply parts to major manufacturers worldwide.

Vinnie never took his opportunities for granted and put everything he had into every game.

His tenacity and drive paid off both on the basketball court and in the boardroom, ensuring his success.

Here are our favorite quotes from Vinnie Johnson:

One of the standout features of Vinnie’s game was his willingness to have a go and take the shot. +

It was this willingness to let it all ride on a single chance that made him a good sportsman and a great entrepreneur.

1. When In Doubt, Take The Shot

Vinnie always had to stay on his toes for any potential shots that weren’t according to the game plan. The lesson learned is to take the shot at what you want, even when everything is not going as planned.

2. Do Everything To The Best Of Your Ability

Always try to do everything at 110 percent, and just like Vinnie, you may have the best chance at success. He always put everything into what he did and that paid off.

3. Once You Close A Door, Another One Opens

Vinnie was famous for his basketball skills, but when that came to an end, he risked it all by following a dream he had of founding an automotive corporation.

Vinnie’s basketball career was very successful, but the fact that he didn’t let it end there, founding his own automotive company, is an inspiration to many.

He has gone from being a successful basketball player to becoming the Piston Group’s multi-millionaire chairman and chief executive officer.

Johnson took the $5 million from his NBA career and increased his net worth dramatically by betting on his own abilities and talent.

As of November 2022, Vinnie Johnson’s net worth is estimated to be $400 Million.

What do you think about Vinnie Johnson’s net worth? Leave a comment below.