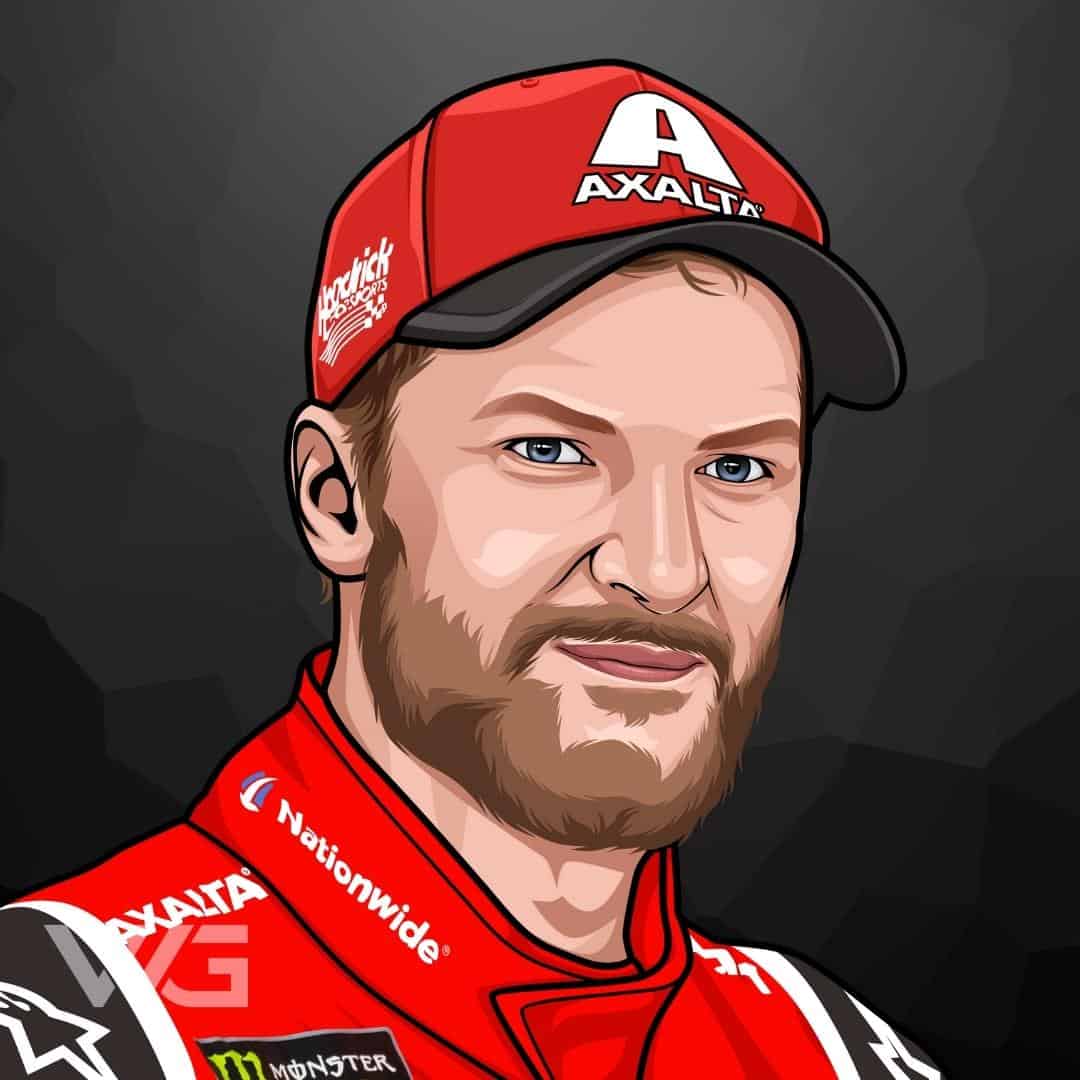 What is Dale Earnhardt Jr.’s net worth?

And he’s not alone, as his family is well known for their positions within the race car fraternity.

Dale Jr. was given the name “Pied Piper” during his days as a top plate track racer. This is an apt description as he dominated the field, often leading for most of the race with his fellow drivers strung out behind him like rats following the mythical character. He’s considered one of the racing greats, known for dominating Daytona and Talladega.

Ralph Dale Earnhardt Jr. was born October 10, 1974, in North Carolina, USA. With the difficulties of his parent’s divorce, Dale found himself moving between his mother’s and father’s homes at a young age. Due to the constant back and forth, and since his dad was racing most of the time, Dale was mainly raised by his stepmother.

His first step into the world of cars and racing was when he started working his first job at his father’s dealership. Immersed in his surroundings of racing and cars, Dale started racing at the early age of 17.

He saved up enough money to go into partnership with his brother to buy a 1979 Lancia Monte Carlo, which they both raced in the Street Stock Division.

After two years of competing, he moved up to racing in the Late Model Stock Division. With his racing and working with cars, Dale started to develop a deep passion for racing. This passion drove him to earn an automotive technology degree at Mitchell Community College.

Dale received a life-changing chance to drive in a famous NASCAR race. He filled in for a driver on his father’s team and did so well that they kept him on. He continued to drive throughout 1997, improving as he learned the ropes. This culminated in earning his own ride in 1998.

With everything going so well, Dale was unprepared for the tragic loss of his father, who passed away suddenly in 2001. In an unpredictable sequence of events, Dale Earnhardt Sr. crashed into the wall at turn 4 during his last lap of the Daytona 500. Later that year, Dale won the race at the Daytona track.

Winning once wasn’t enough for him and in 2004 he won the Daytona 500. With the ups and downs in his career, Dale Earnhardt Jr. became one of the most popular drivers on the circuit. During his race career, he won the NASCAR Cup Series races 26 times.

With his interesting and charming personality, Dale found his popularity on the rise. Such was his charm and good nature that he ended up winning NASCAR’s Most Popular Driver Award every year, for 15 years.

Despite his love of the game and the impact that he’s made on racing, Dale retired from driving in 2017. The injuries he suffered caused a concussion, which unfortunately precluded him from returning to the sport he loves so much.

Dale Earnhardt Jr. is estimated to have earned a salary of between $20 million and $25 million per year. In 2016, while he was still racing, Dale was believed to earn around $23.5 million. He earned $22 million annually through endorsements alone.

Winning race drivers earn substantial amounts of money, both in terms of salary and bonuses, as well as from endorsements. Dale was at the top of the stock car racing circuit for many years and has the accumulated wealth that goes with that level of success.

Here’s a breakdown of Dale Earnhardt’s annual net worth:

A “true love story” is the best description of Dale and his wife Amy Reimann’s relationship. After a 6-year courtship, Dale popped the question in a church in Germany, which had been home to his ancestors over 300 years before.

They got married on New Year’s Eve in 2016 in a vineyard. And, in October 2017, they announced they were expecting their first child, Isla Rose Earnhardt.

In March 2020, they announced the birth of their second child, Nicole Lorraine Earnhardt.

Dale suffered multiple injuries that led to his suffering from a bad case of concussion. That put him out of racing for several months in 2016. Ever the thoughtful, considerate person, Dale has revealed he wants to donate his brain to science when he passes away.

He believes that donating his brain will help research into concussions progress enough to provide life-saving information and help those who suffer head injuries in the future.

In 2015, Dale and his family were involved in a potentially fatal accident when they survived a plane crash. Due to a part of the landing gear collapsing, the plane’s right wing hit the runway, which caused the plane to bounce multiple times.

While the plane was engulfed in flames, the pilot and Dale were able to kick a door open wide enough for Dale’s family and for the pilots to flee from the accident.

Over the years, Dale has performed flawlessly behind the wheel. He may not have always won, but he was in there fighting to the bitter end. His tenacity and perseverance paid off with a spectacular win rate to put him amongst the greats of NASCAR.

Here are some highlights from Dale Earnhardt Jr.’s career:

Dale has made some investments in property, one of them being a pirate-ship-inspired house based in Key West, Florida. It is reported to have a current value of more than $3.7 million. He also owns a house in Mooresville, North Carolina, which is located on 200 acres of land.

He has a few of the most expensive private jets in the world, including a Learjet 60 and a Cessna Citation Latitude.

It comes as no surprise that Dale has some of the most expensive cars in the world in his backyard. Not only does he own a variety of priceless track cars, but his stable includes a 1948 Chevy TK Pickup, a custom 1972 Chevy Camaro, and a 1976 Chevrolet Laguna.

With his luxurious lifestyle supported by his well-deserved wins, Dale has made it one of his primary goals in life to help charities. It is said that he has granted more than 250 wishes through the “Make-A-Wish Foundation”.

Dale Jr. also founded the Dale Jr. Foundation which has made over $8 million in donations to multiple charities since 2007.

As a race driver, Dale has achieved an enviable reputation. He’s earned his place in the NASCAR hall of fame with his truly impressive skills. And he’s done it without riding roughshod over his peers. He’s a thoroughly good person whom everyone acknowledges as a true champion.

Here are some of the best highlights of Dale Earnhardt Jr.’s career:

Dale is, above all else, a competitive man. He’s spent his life chasing gold. But, he’s never lost sight of his humanity. He aims to be both a better human and a role model for his fans.

Here are our favorite quotes from Dale Earnhardt Jr.:

The success and fame that accompanies a motor racing legend like Dale Earnhardt Jr. can change a man, but he seems unaffected by his accomplishments. He embodies traditional family values and only wants what’s best for his family and those around him.

Dale’s dad passed on his love and passion for motor racing to his son. He in turn wishes to improve on his family’s legacy for the benefit of his family and his fans.

2. Make The World A Better Place

Even though he’s a major hit in the racing world, Dale still wants to do what he can to make the world better with what he has to offer.

3. Die Doing What You Love

Dale never let his father’s tragic death get in the way of his racing. His father’s words were to die doing what you love, which he knew was Dale’s love for racing.

Dale Earnhardt Jr. made his father proud. He has gone on to make history and will continue to be a legend in the racing world. Even though he’s in retirement, Dale has announced that he’ll return to NASCAR for one Xfinity Series race each year starting in 2022.

Dale’s love and talent for racing can be seen through his work and wins.

What do you think about Dale Earnhardt Jr.’s net worth? Leave a comment below.