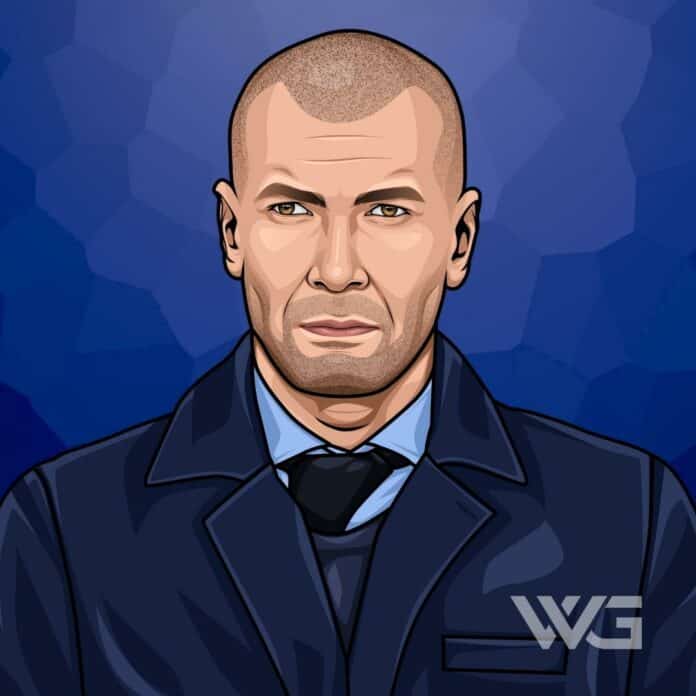 What is Zinedine Zidane’s net worth?

Zinedine Zidane is one of the most successful footballers and coaches of all time, with a FIFA World Cup title and being the first coach to win three Champions League cups in a row.

Zidane, also known as Zizou, made the transition from playing to coaching and was so successful in his new role that he most recently served as the head coach of the Spanish club Real Madrid.

As of January 2023, Zinedine Zidane’s net worth is estimated to be $120 Million.

From the little village of Aguemoune, Zidane’s parents, Smail and Malika, relocated to Paris when he was still a child.

Zidane’s mother was a stay-at-home mom, while his father worked as a warehouseman and nightwatchman at a department store, frequently on the night shift.

According to the standards of the neighborhood, which was infamous in Marseille for its high crime and unemployment rates, the family led a reassuringly comfortable life.

Zidane calls his father and his strict upbringing the “guiding light” throughout his career.

Zidane had intended to spend six weeks at AS Cannes, but he ended up playing professionally there for four years.

He left his family to join Cannes and was encouraged to remain with his family by Cannes Director Jean-Claude Elineau instead of staying in the dormitory he shared with 20 other trainees. Zidane later said that he achieved balance while residing with the Elineaus family.

In the 1992–93 season, Zidane was moved to Girondins de Bordeaux, where he won the 1995 Intertoto Cup after defeating Karlsruhe and finishing second to Bayern Munich in the 1995–96 UEFA Cup.

After a string of outstanding performances for Bordeaux and France, Zidane received offers to play for the best clubs in Europe in the spring of 1996.

However, during the offseason, he chose to join Juventus, the UEFA Champions League champions.

Zidane made an early impression in Italy by winning the 1996 Intercontinental Cup and the Serie A championship in 1996–1997. In his debut campaign, he received the Serie A Foreign Footballer of the Year award.

Zidane signed a four-year contract to play at Real Madrid in 2001. He scored the famous match-winning goal in Madrid’s 2-1 victory over Bayer Leverkusen in the 2002 UEFA Champions League Final on a volley with his weaker left foot, from the edge of the 18-yard box. It was judged as the Champions League’s best goal ever.

As part of his new job, Zidane was expected to take part in Champions League activities as well as frequent first-team travel, pre-match gatherings, training sessions, and meetings with the head coach.

Right from the outset, Zidane knew what he wanted and went after it with passion. In the process, he earned a fortune on the pitch and accumulated a fortune.

Having earned an enormous salary for the time, Zidane went on to head up one of the very best clubs in Europe, taking Real Madrid to a Champions League victory.

He continued to achieve great results, which ensured that he continued as one of the highest-paid coaches in football.

Instead of wasting his money, Zidane was sure to save a great deal and invest it wisely.

This meant that when he retired from football, he had an enormous investment portfolio, but instead of retiring, he transitioned to coaching.

Here’s a breakdown of Zinedine Zidane’s annual net worth:

Zidane’s wealth continues to grow due to his success as one of Europe’s best coaches. There is no doubt that he will continue to perform miracles for his club and hold down the Real Madrid coaching job for years to come.

While playing for Cannes in the 1988–89 season, Zidane, then 17 years old, met Véronique Fernández. She was of Spanish origin, born in Aveyron, and would later become his wife.

Zidane’s brilliance on the pitch has only been surpassed by his strategic brilliance in coaching Real Madrid to a Champions League victory.

In the process, he has managed to humble their greatest rivals, Barcelona FC, home to Lionel Messi, arguably the most brilliant footballer of all time.

Here are some highlights from Zinedine Zidane’s career:

With his coaching career showing immense promise, Zidane is set to become the most decorated French footballer of all time.

Not only was he unbelievable on the pitch, but he has been able to translate his strategic understanding into a phenomenal coaching ability as well.

How Does Zinedine Zidane Spend His Money?

Zidane decided to invest a large part of his fortune in real estate. Like the majority of footballers who have achieved financial success, he currently has properties in Spain, France, and Italy.

Zinedine Zidane now leads a luxurious lifestyle that only a select few individuals can afford thanks to his business mindset.

He drives some of the most expensive cars in the world and has been spotted in an Audi RS 6 Avant. His car collection includes a Range Rover Sport, the Mercedes G63 AMG, and another Audi, the RS3.

Zidane’s name is synonymous with football in Europe and he has a major following worldwide.

During the 90s and 2000s, he redefined what was possible with a soccer ball, turning the game on its head at times.

Here are some of the best highlights of Zinedine Zidane’s career:

During his time as a player, Zidane was able to almost magically control the ball, taking it out of the air without missing a step and doing pirouettes on the field that seemed to defy gravity.

He also had an incredible touch with so much power that, when on target, he seldom missed.

Zidane was never at a loss for words and his straightforward way of expressing himself did not always win him any friends.

However, he knew what he wanted from football and he made sure that he gave 100% effort every time he appeared on the field.

Here are our favorite quotes from Zinedine Zidane:

Zinedine was brought up to believe in discipline and hard work. He credits these early lessons in life for his success as a player.

Zidane had many ups and downs in his career, but despite that, he’s kept going and achieved his goal.  He will go down in history as one of the greatest footballers of all time.

2. Listen Before You Speak

One thing that makes Zidane successful is the fact he listens before he speaks, from interviews to team meetings or on the pitch. Zidane first takes into account everything and everyone, no matter the circumstances, and then gives his opinion.

Zidane learned to play soccer in the streets of La Castellane, a rough section of Marseille. Moving on from there, he achieved his dream through hard work and commitment.

In his final match for his country, France lost the World Cup final, and he was sent off. But he was awarded the Golden Ball for being the competition’s top player and will go down in history as one of the very best.

As of January 2023, Zinedine Zidane’s net worth is estimated to be $120 Million.

What do you think about Zinedine Zidane’s net worth? Leave a comment below.

What is Mack Maine's net worth? Introduction  As of ,...