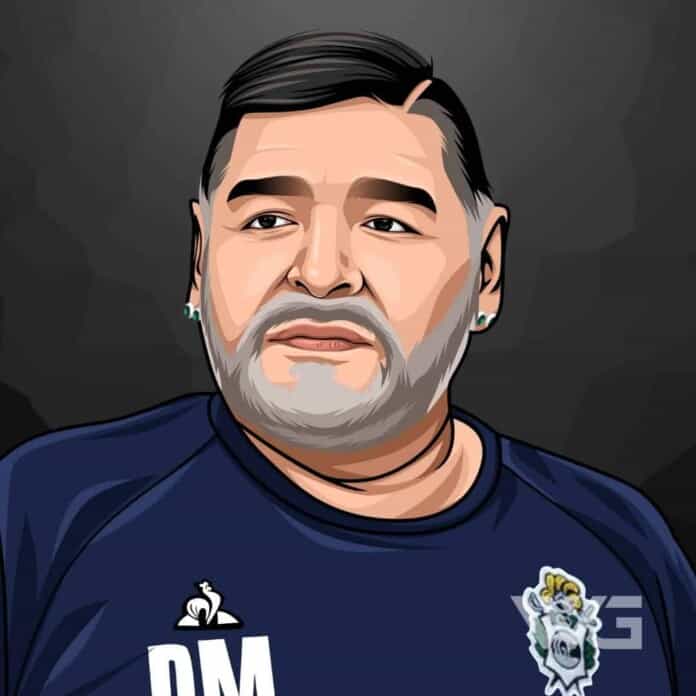 What is Diego Maradona’s net worth?

Diego Maradona is an Argentine retired professional footballer from Buenos Aires. He is widely regarded as one of the greatest football players of all time, and was one of the two joint winners of the FIFA Player of the 20th Century award.

Diego Armando Maradona was born on the 30th of October 1960, at the Policlínico (Polyclinic) Evita Hospital in Lanús, Buenos Aires Province.

Maradona was raised in Villa Fiorito, a shantytown of Buenos Air, Argentina’s southern outskirts, to a low-income family moved from Corrientes Province.

In 1976, a little before his sixteenth birthday, he made his professional debut with Argentinos Juniors. In his five years of association with the club team, he made 167 appearances and scored 115 goals.

His first senior goal came in a match against Scotland at Hampden Park on June 2, 1979. Argentina won the match by 3-1.

In 1979, he played for Argentina in the FIFA U-20 World Cup and helped the team won the tournament.

In 1982, he played his first World Cup tournament. Despite being defending champions, Argentina did not perform to expectations and was ousted by the tournament in the second round, losing to Brazil and eventual winners, Italy.

In the 1990 FIFA World Cup, he continued his role as a captain of the Argentina team, with the only difference being he was less dominant.

Maradona returned to Boca Juniors and played with the club for two years in 1995, before announcing his retirement in 1997 on the eve of his birthday.

Here are some of the best highlights of Diego Maradona’s career:

“While the coach is entitled to celebrate the team’s victories, there is a manner and a way of doing so without aggravating the opponent” – Diego Maradona

“He’s a leader and is offering lessons in beautiful football. He has something different to any other player in the world.” – Diego Maradona

“There would be no debate about who was the best footballer the world had ever seen – me or Pele. Everyone would say to me.” – Diego Maradona

“God makes me play well. That is why I always make the sign of the cross when I walk out onto the field. I feel I would be betraying him if I didn’t.” – Diego Maradona

Now that you know all about Diego Maradona’s net worth, and how he achieved success; let’s take a look at some of the best lessons we can learn from him:

1. Competition is a Part of the Game

Competition is always a good thing. It forces us to do our best. A monopoly renders people complacent and satisfied with mediocrity.

Stay focused and stay determined. Don’t look to anyone else to be your determination – have self-determination. It will take you very far.

Take advantage of every opportunity you have to work to hone your skills.

How much is Diego Maradona worth?

Diego Maradona’s net worth is estimated to be $500 Thousand.

How old is Diego Maradona?

How tall is Diego Maradona?

Excellent dribbling action, powerful assists, accurate passes, and impressive footwork made Diego Maradona rise up to the ranks, within a short period, to become the greatest football player of all times.

Argentina’s national hero and pride, this exceptionally talented young man were born to play the sport.

What do you think about Diego Maradona’s net worth? Leave a comment below.