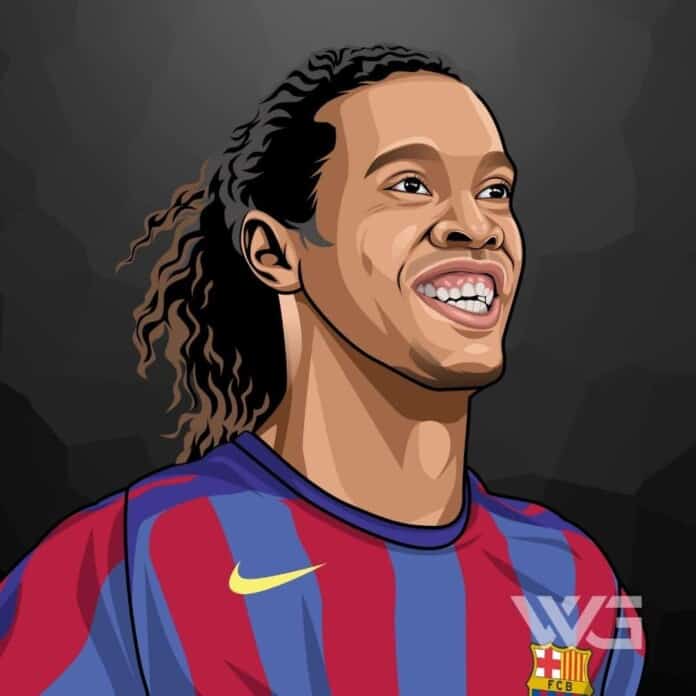 What is Ronaldinho’s net worth?

As of February 2023, Ronaldinho’s net worth is estimated to be roughly $90 Million.

Ronaldo de Assis Moreira, better known as Ronaldinho, is a Brazilian former professional footballer and ambassador for Barcelona. from Porto Alegre. He is regarded to be one of the best football players of all time.

Ronaldo de Assis Moreira was born on the 21st of March, 1980, in the city of Porto Alegre.

His mother Dona Miguelina Elói Assis dos Santos worked as a salesperson while his father, João de Assis Moreira, was a shipyard worker who also played football for a local club.

He inherited his father’s passion for football and started playing organized football as a small child. Unfortunately, his father whom he idolized died of a heart attack when Ronaldinho was eight.

Ronaldinho signed his first professional contract to play for Grêmio and made his senior side debut during the 1998 Copa Libertadores. He achieved considerable success playing for the team and helped them win the inaugural Copa Sul-Minas.

He was a part of Brazil’s football team that won the FIFA World Cup in 2002. In the team, he starred alongside two other football legends, Ronaldo and Rivaldo.

In the 2005-06 season, he played a pivotal role in helping Barcelona win their first Champions League title in 14 years.

Overall he enjoyed a very successful career with Barcelona and played his 200th career match for the team in a league match against Osasuna on 3 February 2008.

In July 2008 he signed a three-year contract with Milan and finished his first season with the team with 10 goals from 32 appearances in all competitions.

He moved to Atlético Mineiro in June 2012, signing a six-month contract. In 2013, he helped the team win Campeonato Mineiro and led his club to its first-ever title of the Copa Libertadores.

Here are some of the best highlights of Ronaldinho’s career:

“We knew this would happen. When a team finishes as champion something similar always occurs. Opponents work out how you play, they mark you very closely and hardly let us move.” – Ronaldinho

“I have the chance to do for a living what I like the most in life, and that’s playing football. I can make people happy and enjoy myself at the same time.” – Ronaldinho

“He is the man that makes the difference between a team that plays well and another that is really memorable. He alone can decide one game.” – Ronaldinho

“My game is based on improvisation. Often, a forward does not have the time to think too much. You have a second, rarely more, to decide whether to dribble, shoot or pass to the right or left. It is an instinct that gives the orders.” – Ronaldinho

“A lot of the moves I make originate from futsal. It’s played in a very small space, and the ball control is different in futsal. And to this day my ball control is pretty similar to a futsal player’s control.” – Ronaldinho

Now that you know all about Ronaldinho’s net worth, and how he achieved success; let’s take a look at some of the best lessons we can learn from him:

One of the most striking things about Ronaldinho’s letter is his openness and his ability to show emotion. It’s OK for men to show how they feel. It’s actually a sign of real strength to do so.

And it certainly helped Ronaldinho deal with the death of his father. By expressing his emotions, Ronaldinho overcame his hurt and his suffering to become one of the world’s greatest players.

2. Get Support if You Need it

Because Ronaldinho was open about his emotions, he could share his grief with his older brother. He realized he needed support after the death of his father and he looked for help from Roberto.

In the letter, he writes: “You are lucky because you have Roberto. Roberto will be there for you always. He won’t just be a brother, he will become like a father to you. And more than anything, he’ll be your hero.”

3. NEVER Give Up On Your Dreams

Despite hardships, Ronaldinho never gave up on his dream of becoming a pro footballer. He was once told by a coach that due to his “freestyle” playing, he would never make it as a professional.

How much is Ronaldinho worth?

Ronaldinho’s net worth is estimated to be $90 Million.

How old is Ronaldinho?

How tall is Ronaldinho?

Ronaldinho is a Brazilian footballer considered to be one of the best players of his generation. A player regarded for his technique, tricks, overhead kicks, and dribbling, he was a member of Brazil’s 2002 World Cup-winning team.

As of February 2023, Ronaldinho’s net worth is approximately $90 Million.

What do you think about Ronaldinho’s net worth? Leave a comment below.

The current center for the Indiana Pacers, Myles Turner, has become remarkably wealthy as one of the best players in the NBA.