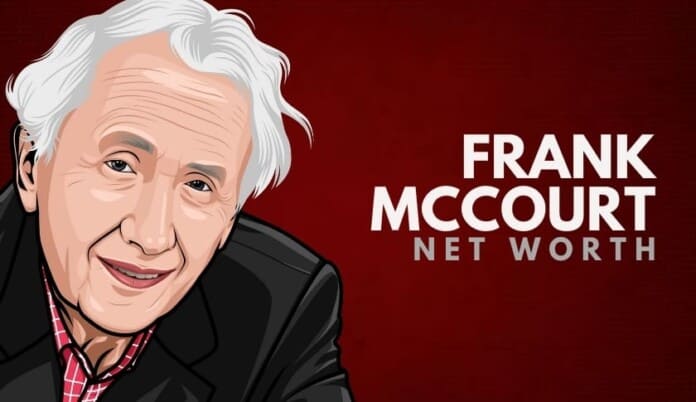 What is Frank McCourt’s net worth?

Frank McCourt was an Irish-American teacher and writer.

McCourt won a Pulitzer Prize for his book Angela’s Ashes, a tragicomic memoir of the misery and squalor of his childhood. He is a fabulous writer and a remarkable teacher. His book ‘Angela Ashes’ made him an instant success around the world in no time. The book has won him many awards, including the famous Pulitzer Prize.

Francis McCourt was born on the 19th of August, 1930, in New York City. McCourt was the eldest child of Irish Catholic immigrants Malachy Gerald McCourt, Sr. McCourt lived in New York with his parents and his siblings.

His four younger siblings include Malachy, twin Oliver and Eugene, and Margaret, who died 21 days after birth in 1934. The same year of his sister’s death, in the midst of the Great Depression, the family moved back to Ireland.  When he was 13 years old, he dropped out of school.

In 1949, by the age of 19, McCourt left Ireland and began saving money from various jobs, including as a telegram delivery boy. He took a boat from Cork to New York City.

He met a priest he had met on the ship, and he got him a room to stay in and his job at New York City’s Biltmore Hotel. McCourt earned about $26 a week and sent $10 of it to his mother in Limerick.

Using his education benefits, McCourt talked his way into New York University. He graduated in 1957 from New York University with a bachelor’s degree in English. McCourt won the annual Pulitzer Prize for Biography or Autobiography in 1997.

He was a member of the National Arts Club and was a recipient of the Award of Excellence from The International Center in New York.

In 1999, he received the Golden Plate Award of the American Academy of Achievement. McCourt was awarded an honorary degree from the University of Western Ontario in 2002.

In 2011, the Frank McCourt Museum was opened by Malachy McCourt at Leamy House, Hartstonge Street, Limerick. The building was formerly known as the Leamy School, the former school of Frank and his brother Malachy.

How Did  Frank McCourt Spend His Money?

Frank McCourt spent some of his money on his former house in Roxbury.

Before his passing, he owned a beautiful home in Roxbury, Connecticut.

Here are some of the best highlights of Frank McCourt’s career:

“In the high school classroom you are a drill sergent, a rabbi, a shoulder to cry on, a disciplinarian, a singer, a low-level scholar, a clerk, a referee, a clown, a counselor, a dress-code enforcer, a conductor, an apologist, a philosopher, a collaborator, a tap dancer, a politician, a therapist, a fool, a traffic cop, a priest, a mother-father-brother-sister-uncle-aunt, a bookeeper, a critic, a psychologist, the last straw.” – Frank McCourt

“He says, You have to study and learn so that you can make up your own mind about history and everything else but you can’t make up an empty mind. Stock your mind, stock your mind. You might be poor , your shoes might be broken , but your mind is a palace.” – Frank McCourt

“I had to get rid of any idea of hell or any idea of the afterlife. That’s what held me, kept me down. So now I just have nothing but contempt for the institution of the church.” – Frank McCourt

“Sit and quiet yourself. Luxuriate in a certain memory, and the details will come. Let the images flow. You’ll be amazed at what will come out on paper. I’m still learning what it is about the past that I want to write. I don’t worry about it. It will emerge. It will insist on being told.” – Frank McCourt

Now that you know all about Frank McCourt’s net worth and how he achieved success; let’s take a look at some of the lessons we can learn from him:

The sky is the limit. You never have the same experience twice.

Everyone has a story to tell. All you have to do is write it. But it’s not that easy.

Happiness is hard to recall. Its just a glow.

Frank McCourt was an American businessman and former sports team owner. McCourt is best known for being the former owner of the Los Angeles Dodgers. He launched a bitter battle between him and his ex-wife. They met as students and spent thirty years building a real state and sports empore.

What do you think about Frank McCourt’s net worth? Leave a comment below.