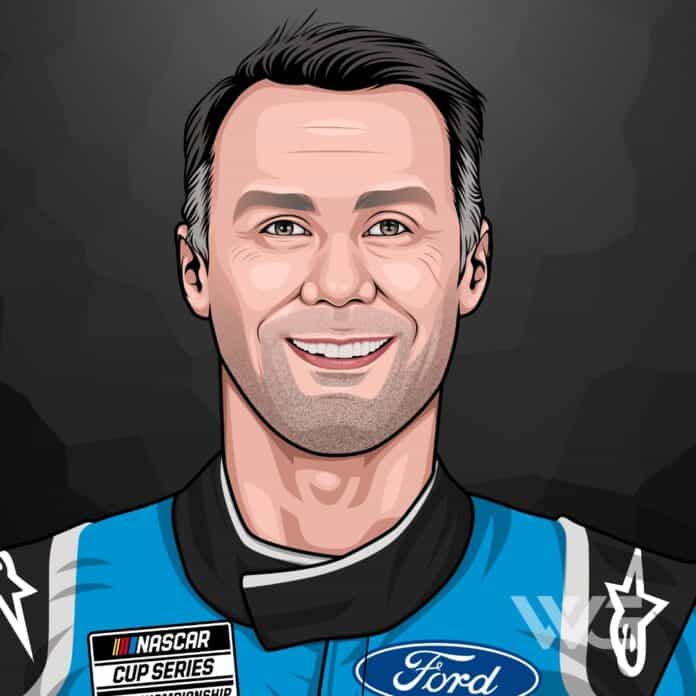 What is Kevin Harvick’s net worth?

Kevin Harvick is a professional stock car racing driver from the United States.

He now drives the No. 4 Ford Mustang for Stewart-Haas Racing and competes full-time in the Monster Energy NASCAR Cup Series.

Between 2004 and 2011, Harvick was the owner of the racing team Kevin Harvick Incorporated, which entered vehicles in the Xfinity and Camping World Truck Series.

As of February 2023, Kevin Harvick’s net worth is estimated to be $70 Million.

Harvick is the son of Mike and JoNell Harvick, and he has a younger sister, Amber. He started kart racing at a young age after his parents gave him a go-kart after graduating from kindergarten.

Harvick grew up a fan of fellow Bakersfield native and IndyCar driver Rick Mears and raced go-karts with Mears’ son Clint. He had a lot of success in the go-kart racing scene, winning two Grand National titles and seven national titles.

He participated in wrestling competitions for North High School during the off-season from racing, and in his senior year, he qualified for a CIF Central Section championship in his weight division.

Harvick also participated in football, basketball, baseball, and soccer. He enrolled in Bakersfield College after high school with the idea of majoring in architecture, but later dropped out to focus entirely on his racing career.

In 1995, Harvick made his Craftsman Truck Series debut at Bakersfield’s Mesa Marin Raceway, starting 27th and finishing 27th in the family-owned No. 72.

The following year, he competed in four races in the No. 72; at Mesa Marin, his best placing was eleventh. Midway through the 1997 season, he agreed to drive the No. 75 for Spears Motorsports, and he finished in eighth position twice.

He completed a full schedule in 1997, finishing in 17th place in the points rankings, and posting three top-five finishes.

Harvick agreed to drive the No. 2 Chevrolet for Richard Childress Racing in 2000, his first full Busch Series season. He achieved three victories, eight top-five finishes, and 16 top-ten finishes in addition to being third in the standings.

Three weeks after Earnhardt’s passing, on March 11, 2001, at Atlanta Motor Speedway, Kevin competed in the Cracker Barrel Old Country Store 500. There, he edged out Jeff Gordon to win his first Winston Cup race of the season.

After the victory, he showed respect to Earnhardt by driving backwards on the track while raising three fingers outside the driver’s window.

Except for four DNFs, he maintained a consistent pattern of finishes up to his victory at Michigan, which ended a 65-race winless streak and made him the season’s 15th different victor.

A week later, Harvick won the 60th race of his career in Richmond. After his car caught fire during the Southern 500, Harvick finished 33rd, dropping him to 16th place and last in the playoff standings.

The following week, at Kansas, Harvick crashed into the wall on lap 33 when Ross Chastain made contact with Bubba Wallace, who was driving for Michael Jordan’s team. This was the first time in Harvick’s career that he experienced three consecutive DNFs.

Harvick didn’t make the starting grid for the second race of the 2000 season at Rockingham, but he would go on to win the NASCAR Busch Series Rookie of the Year award.

This cemented his relationship with the team and ensured that his earnings would continue to rise as the wins piled up.

Over the course of his career, Kevin Harvick earned in excess of $188 million and is one of the highest-paid race drivers in the world.

With his record wins over so many years, sponsors were queuing up to get their name in front of the cameras when he graced the winner’s podium.

With so many racing drivers blowing their earnings on expensive pastimes and hobbies, Kevin was the exception.

He invested his money wisely and made sure that he and his family were well taken care of.

Here’s a breakdown of Kevin Harvick’s annual net worth:

Kevin Harvick established himself as the fastest driver in the NASCAR Cup Series since joining Stewart-Haas Racing in 2014.

With a record like that, it’s not hard to see why he is one of the highest-earning race car drivers in NASCAR history.

Throughout his career, Harvick has appeared on various TV talk shows, including The Tony Danza Show, The Late Show with David Letterman, Live with Regis and Kelly, and Jim Rome is Burning.

He appeared in the first season of NASCAR Drivers: 360 on FX. It involved a thorough examination of NASCAR drivers’ lives off the track and during their training.

Harvick has appeared along with other well-known celebrities like Dwight Howard and Ray J on MTV Cribs.

The Kevin Harvick Foundation (KHF), founded in 2010 by Harvick and his wife, DeLana, supports projects that improve the lives of children across the United States.

He and DeLana Harvick have two children, Keelan and Piper. You may have seen Keelan at the track with his mother, and sometimes in the seat of his dad’s car right before race time.

Golf, hunting, and, of course, family time are some of the ways Kevin relaxes when he’s not speeding around the track.

In addition to being the third-best driver in Xfinity Series history with 47 victories, Harvick is also ranked third on the all-time wins list for NASCAR.

Only Richard Petty and Kyle Busch have managed to keep ahead of Kevin, who has 58 Cup victories to his name.

Here are some of the more memorable moments from Kevin Harvick’s career:

In 2022, he ended the second-longest winless stretch of his career of 65 races with a win in Michigan.

How Does Kevin Harvick Spend His Money?

Kevin Harvick didn’t have a car of his own until he was in his twenties. It was at that stage that he went out and bought his first truck, one that he wouldn’t have to share with his dad.

Since then, he’s owned multiple vehicles, but his particular favorites are Chevrolet classics. He’s got some of the most expensive cars in the world in his garage and when he’s not on the track, you can see him driving his classic 1969 Chevrolet Camaro as often as he can.

Kevin can pretty much afford anything his heart desires, being one of the richest drivers in NASCAR.

With his family taking first place in his priorities, he has owned a variety of massively expensive homes. He and his wife, DeLana, sold their 110.5-acre, North Carolina estate for a reported $3.2 million.

He is one of many celebrities like Nicole Scherzinger, and Richard Branson who have opened their homes to the cameras for an inside look at their lavish lifestyle.

He now lives in Charlotte, North Carolina, in a huge six-bedroomed house with seven bathrooms and a reported 9,000 square feet of space.

Over the course of Kevin’s career, he’s held numerous records and has won some of the most prestigious titles in NASCAR.

Now at the end of his career, Kevin was still able to pull off a spectacular win in Richmond.

Here are some of the best highlights of Kevin Harvick’s career:

Kevin Harvick is entering his 22nd year in the NASCAR Cup Series in 2022 and driving the No. 4 Ford Mustang for Stewart-Haas Racing.

He is one of the richest racing drivers in the world and is set for more blistering performances in the seasons ahead.

Kevin Harvick is motivated to win and likes nothing better than to prove his rivals and critics wrong.

He knows that he treads a fine line with every race and nothing is taken for granted when he straps into his race car.

Here are our favorite quotes from Kevin Harvick:

Kevin Harvick is a winner and whatever his opponents and critics might think, when it all comes down to it, winning is all that matters.

Now that you know all about Kevin Harvick’s net worth, here are some of the best success lessons to learn from Kevin Harvick:

1. Make Sure You Win

Kevin is focused on only one thing and that is to win, everything else comes last in his mind when he’s on the track.

He believes that your troubles can resolve themselves or, at the very least, become less important if you’re winning.

Despite suffering from a long winless streak, Kevin never panicked, he just kept on doing the right things and, in the end, he came out on top.

The greatest danger to a race driver is panic and if you don’t allow yourself to panic, most problems can be resolved in time.

As in life, racing can be harsh and unforgiving, and the mark of a true sportsman is, to be honest with yourself and take your lumps.

In addition, he was given the nickname “The Closer” for his propensity for making last-ditch moves to win races, often with commentators asking, “Where did he come from? ” as he took the chequered flag and another win.

As of February 2023, Kevin Harvick’s net worth is estimated to be $70 Million.

What do you think about Kevin Harvick’s net worth? Leave a comment below.