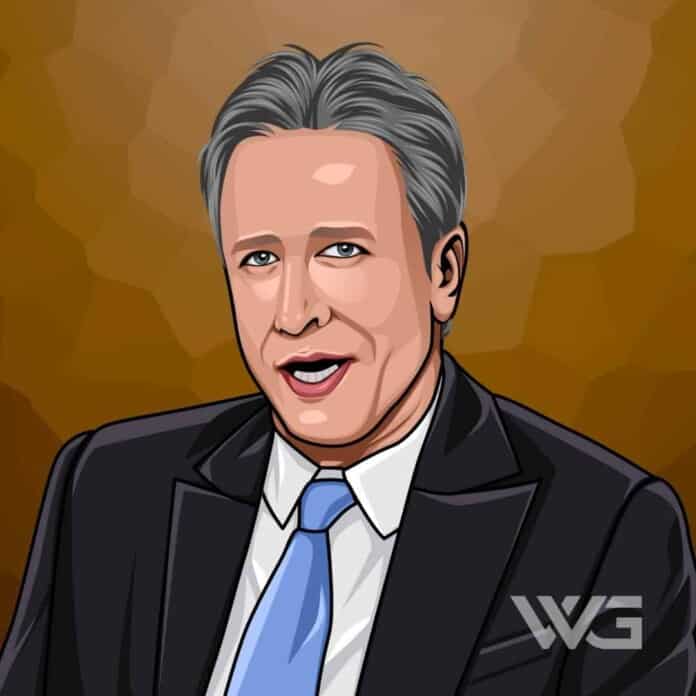 What is Jon Stewart’s net worth?

He hosted The Daily Show, a satirical news program on Comedy Central, from 1999 to 2015.

Jonathan Stuart Leibowitz was born on the 28th of November, 1962, in New York. His parents divorced when he was 11 years old, and he did not have much contact with his father.

He attended Lawrence High School in New Jersey. He then went to The College of William & Mary in Virginia and graduated in 1984.

Stewart moved to New York City in 1986 to pursue a career in comedy. He started out as a stand-up comedian at The Bitter End – a nightclub.

He found a job as a writer for the television show ‘Caroline’s Comedy Hour’ in 1989. Within a couple of years he began co-hosting Comedy Central’s ‘Short Attention Span Theater’ with Patty Rosborough in 1991.

In 1999, the host of ‘The Daily Show’, Craig Kilborn left to host another show and the position was offered to Stewart.

Stewart helped take ‘The Daily Show’—described as a fake news program—to greater heights of fame by focusing it more strongly on politics and national media.

He teamed up with Stephen Colbert for the ‘Rally to Restore Sanity and/or Fear’ in October 2010. The rally took place on the National Mall in Washington D.C. and brought in around 215,000 participants.

Here are some of the best highlights of Jon Stewart’s career:

“In Iraq, the U.S. military’s whack-a-mole approach to killing Saddam Hussein may have finally paid off. The bombs destroyed the area and left behind a 60-foot crater, or as coalition forces prefer to call it: a freedom hole.” – Jon Stewart

“Nobody cares that Mitt Romney is rich. It’s Romney’s inability to understand the institutional advantage that he gains from the government’s tax code largesse, that’s a little offensive to people, especially considering Romney’s view on anyone else who looks to the government for things like, I don’t know, food and medicine.” – Jon Stewart

“If it turns out that President Barack Obama can make a deal with the most intransigent, hard-line, unreasonable, totalitarian mullahs in the world but not with Republicans? Maybe he’s not the problem.” – Jon Stewart

Now that you know all about Jon Stewart’s net worth, and how he achieved success; let’s take a look at some of the lessons we can learn from him:

1. Listen to Your Needs

Don’t think ignoring the moment your mind needs a pause will make you a hero- stop to reflect about your needs, find a solution and move on in a better shape.

The first step to achieve anything is to be your true self, relentlessly- life is too short to pretend to be someone else.

It is not easy to forgive, but it will teach you important lessons.

How much is Jon Stewart worth?

Jon Stewart’s net worth is estimated to be $120 Million.

How old is Jon Stewart?

How tall is Jon Stewart?

Jon Stewart started his career as a stand-up comedian and soon branched into television as a comedy show host.

His success on the small screen prompted him to try his luck at films and he went on to act in several movies as well. Over the years he has made the transition to direction and production as well by opening his own production house Busboy Productions.

What do you think about Jon Stewart’s net worth? Leave a comment below.