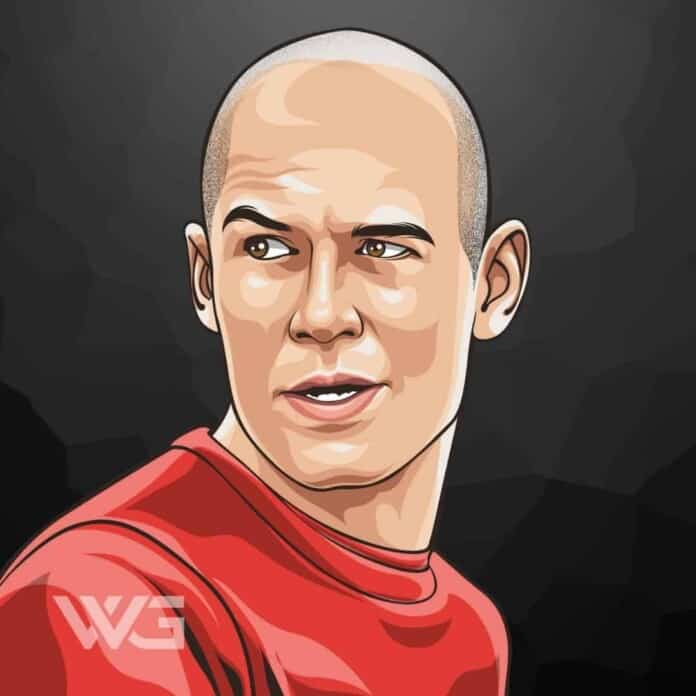 What is Arjen Robben’s net worth?

As of February 2023, Arjen Robben’s net worth is approximately $80 Million.

Arjen Robben is a Dutch former footballer who played as a winger from Bedum, Netherlands.

He is known for his dribbling skills, speed, crossing ability and his accurate left foot long-range shots from the right-wing, Robben was regarded as one of the best players in the world in his prime.

Arjen Robben was born on the 23rd of January, 1984, in Bedum, Netherlands. Robben is very close to his father who acts as his manager and agent. His father also deals with all of his negotiations and contract signings.

Argen’s mother is a public speaker who supports the cause of education for youth. She is a local celebrity who frequently participates in the Eurosonic Noorderslag festival held at Groningen, Netherlands.

Robben started to play professionally for the Dutch Professional club FC Groningen in 2000. He went on to score two goals for the 2000-2001 season and he was also awarded the player of the year title for his first season.

In 2007, Robben signed a contract of 5 years with Real Madrid who paid 35 million pounds for the transfer. With him, the club went on to win the UEFA Champions League match against SV Werder Bremen football team on 18th September, 2007and the La Liga title against Barcelona in 2008.

In 2009, he joined the Bayern Munich club which paid 25 million pounds to Real Madrid as the transfer fee. He has been an asset to the club featuring in 168 matches and scoring around 90 goals.

He helped the team win Bundesliga title six times and also win two DFB Pokal titles. Robben was titled ‘Footballer of the Year’ in Germany in 2010.

Here are some of the best highlights of Arjen Robben’s career:

“Every league has its own culture, its own identity, and its own type of football. It’s very physical in England, but technical skill comes to the fore in Spain, where everybody wants to play beautiful football. The standards are very high in Germany, too; the teams are physically strong, very disciplined, and very well organized.” – Arjen Robben

“I’ve been playing football for a while, but Guardiola really made me a better player. I was 29 when I started working with him, so I wasn’t very young, but if you see the steps I made thanks to him, it shows you what he is capable of doing. Guardiola didn’t just put me on the flanks but in other positions as well.” – Arjen Robben

“When we are in possession, tactically, he is the best coach in the world for me. He works hard, watches a lot of games, and prepares us really well. Guardiola has the feeling for gaping spaces, and he already had that as a player.” – Arjen Robben

“Bayern had no international success in the years before I joined, and my goal was actually to play at the best possible level, which would have meant winning the Champions League.” – Arjen Robben

“Some referees have to think about treating every player the same, even if it’s Ronaldinho or another player from a Premiership club. It doesn’t matter how good you are: you have to be treated the same.” – Arjen Robben

Now that you know all about Arjen Robben’s net worth, and how he achieved success; let’s take a look at some of the best lessons we can learn from him:

1. Playing to Your Strengths

This isn’t to say that Robben is a one-dimensional player. He has simply mastered the art of causing utmost damage to opponents while playing on the right flank. More importantly, there exists a huge difference between theoretically knowing what a player is all about and practically trying to stop him from doing what he does best.

2. Let Someone Else Take the Credit

Life teaches us that we won’t always get the credit for the good work that we do and that’s perfectly alright. However, that by no means implies that we shouldn’t help others at every available opportunity.

3. When Life Knocks You Down, Get Back Up

As influential as Robben has been, the truth still remains that the former Chelsea and Real Madrid man’s career at times, has been marred by injury, particularly those to his hamstrings and his thighs.

Robben’s resilience is a testament to the fact that, even though life is certain to knock us off our stride, we can always get back on track if we choose to.

How much is Arjen Robben worth?

Arjen Robben’s net worth is estimated to be $80 Million.

How old is Arjen Robben?

How tall is Arjen Robben?

Arjen Robben is a Dutch football player well-known for his mobility, speed, and agility. He is currently noted as one of the best footballers in the sports fraternity.

What do you think about Arjen Robben’s net worth? Leave a comment below.