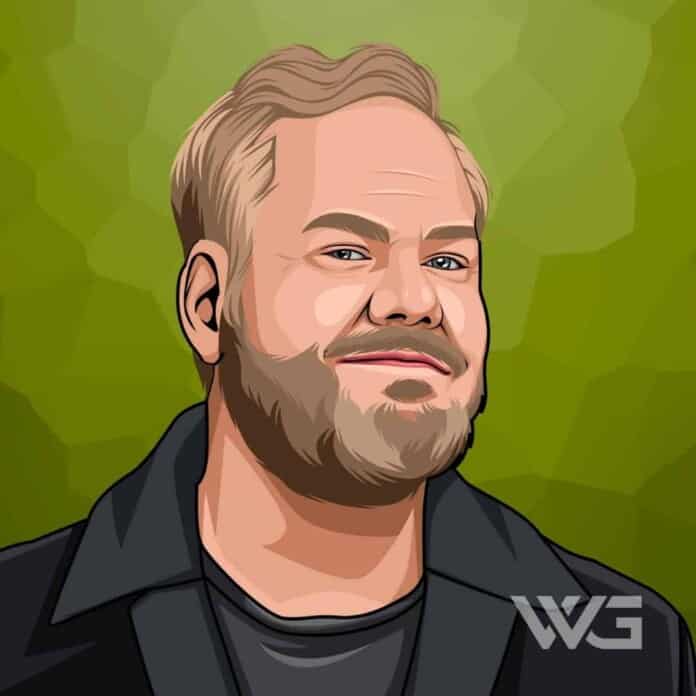 What is Jim Gaffigan’s net worth?

Jim Gaffigan is a well-known actor, comedian, writer, and producer.

Gaffigan has multiple successful comedy specials such as ‘Obsessed’, ‘Mr. Universe’, ‘Cinco’ and ‘Quality Time’. He was raised in Indiana and his material is normally about fatherhood, food, laziness, and observations.

As of December 2022, Jim Gaffigan’s net worth is approximately $30 Million.

Jim Gaffigan was born on the 7th of July, 1966, in Illinois. Gaffigan is the son of Michael A and Marcia Mitchell Gaffigan. He grew up in Indiana and he is the youngest of six children.

His mother, Marcia, was a charity worker and his father, was a banker and CEO of the Mercantile National Bank of Indiana. His father was also involved in local charity work.

In 1990, Jim Gaffigan moved to New York to start his comedy career. His career began when his friend dared him to take a stand up the seminar.

For the first years of his comedy career, he tried many different comedy styles including ranging, from angry comedy to impressions and voices.

In 2012, he recorded ‘Mr. Universe’ which was nominated for a Grammy. In 2016, he was the most popular comedian on all of Pandora.com with over 670 million spins.

Here are the best highlights of Jim Gaffigan’s career:

“Thanksgiving. It’s like we didn’t even try to come up with a tradition. The tradition is, we overeat. ‘Hey, how about at Thanksgiving we just eat a lot?’ ‘But we do that every day!’ ‘Oh. What if we eat a lot with people that annoy the hell out of us?’” – Jim Gaffigan

“Whatever a writer gets paid for his book, it’s never enough. I think that’s true. It’s hard work. But in the end, you wrote a book. It’s something real and tangible that sits on a shelf forever.” – Jim Gaffigan

“In the end, the type of parent you are is going to be something that you carry with you. … Having multiple kids, it’s been a gift in a way. It’s keeping the priorities straighter.” – Jim Gaffigan

“As I go on in standup, I keep being described as cleaner and cleaner as I do each hour, they’re like, ‘It’s unbelievable how clean,’ ‘He’s the cleanest person in the world.’ And then I’ll do shows and people will be like, ‘You’re supposed to be so clean, but you’re talking about cancer.’” – Jim Gaffigan

View our larger collection of the best Jim Gaffigan quotes!

Now that you know all about Jim Gaffigan’s net worth, and how he achieved success; let’s take a look at one of his best lesson that we can learn from him:

Jim Gaffigan means that there is a false perception that comedians can never be serious. It’s like from like the era of court jesters.

How much is Jim Gaffigan worth?

Jim Gaffigan’s net worth is estimated to be $30 Million.

How old is Jim Gaffigan?

How tall is Jim Gaffigan?

Jim Gaffigan is a well-established comedian, actor, and producer. He has been one of the highest-paid comedians in the world in recent years.

During his teenage years, he would often watch comedy shows such as ‘Saturday Night Live’. His comedy specials have received several Grammy nominations.

What do you think about Jim Gaffigan’s net worth? Leave a comment below.