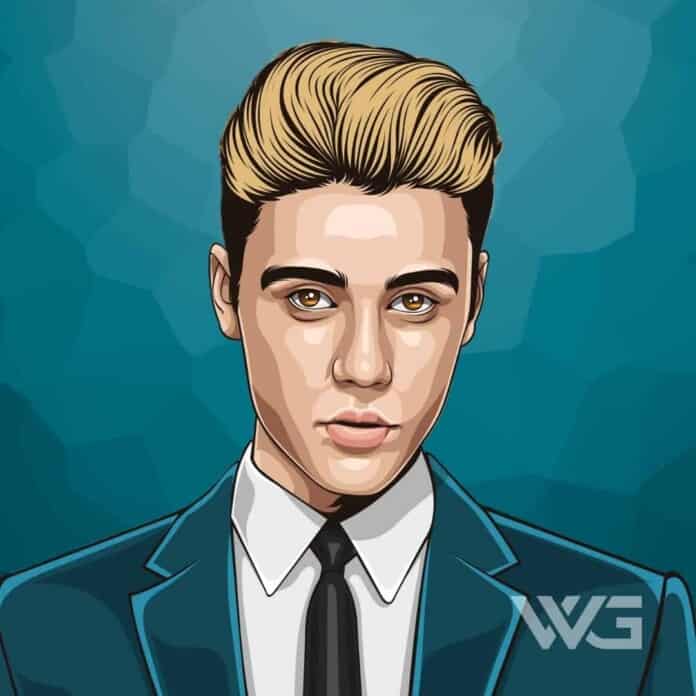 What is Justin Bieber’s net worth?

As of February 2023, Justin Bieber’s net worth is roughly $285 Million. Justin Bieber is a Canadian singer and songwriter, who achieved success at a very young age. In fact, he’s only 26 years old at the moment and everybody knows about him!

Bieber would post YouTube videos of himself covering various songs when he was younger and was then discovered by a talent manager.

Justin Bieber was born on the 1st March, 1994, in London, Ontario. Bieber has two half-siblings, and as a child learned to play several instruments: including the drums, guitar, and trumpet.

It was fairly obvious that Justin was passionate about music, and destined for a future career as a musician. He would often sing covers of various R&B songs, which his mother would record and post online to YouTube.

Justin Bieber’s career began to flourish after he was discovered on YouTube, by Scooter Braun. Justin flew to Atlanta, Georgia, to work with Braun and begin recording demo tapes.

A week later, Bieber began working with Usher and was quickly signed to Raymond Braun Media Group. He was then signed to Island records, where he began to release his first hit singles.

He became the first artist to have seven songs from a debut record chart on the Billboard Hot 100; his debut album was certified triple Platinum in the U.S.

Bieber has worked with a bunch of artists throughout his music career, including the likes of Chris Brown, DJ Khaled, and Jaden Smith.

How Does Justin Bieber Spend His Money?

Bieber was discovered by his now-manager Scooter Braun and Usher after posting YouTube covers that were wildly popular with the Internet’s teens, launching a generation of Beliebers.

His first tour, My World, which ran from 2010 to 2011; grossed $53.3 million. Since Bieber has some major finances, you won’t always catch him flying commercial.

Whether you went to the theater to see Bieber grace the big screen in both 2011 and 2013 or chose to miss the droves of teenagers take over, each project brought in a good amount for the entertainer.

According to WWD, his 2016 endorsement deal with Calvin Klein gave the brand a boost in sales and numbers in social media following. But before that, Bieber was raking in some pretty large endorsement deals, too.

He doesn’t appear to own a private plane, but he’s often spotted jetting out of town on a chartered ride this may cost approximately $1,800 to $9,000 per flight hour. Bieber has a taste for luxury vehicles. TMZ spotted him driving a white Mercedes G-Class SUV around the Los Angeles area.

Here are some of the best highlights from Justin Bieber’s career:

“I’m looking forward to influencing others in a positive way. My message is you can do anything if you just put your mind to it.” – Justin Bieber

“I’ve got my eye on a few things to spend my money on. I’ve got my own bank card but I am really good with money. I don’t spend too much at all.” – Justin Bieber

“A girl has to have a beautiful smile, beautiful eyes and she should have a good sense of humor. She should be honest, loving and trustworthy.” – Justin Bieber

We’re trying to set up a movie for me in the near future. It’s going to be similar to the story of how I got discovered. Kinda like my own version of ‘8 Mile.'” – Justin Bieber

3 Keys to Success from Justin Bieber

Justin Bieber has managed to achieve major success at an incredibly young age. Here are some of the best success lessons from Justin Bieber:

Bieber, for example, concentrates his full commercial attention on the lucrative teen female market. His first fragrance, Someday, was the best-selling perfume of 2011, and his One Less Lonely Girl brand of nail polishes sold over a million bottles in two months.

2. Engage With Your Audience

More impressive than Bieber’s financial clout is his vast social media reach. He has over 21 million Twitter followers and 43 million Facebook fans, while his debut single ‘Baby’ is the most-watched video in YouTube history with over 740 million views.

Very few business owners or successful entrepreneurs make it on their own. It is key to understand our strengths and weaknesses and build teams around us that compensate for or complement our own skillset.

How much is Justin Bieber worth?

Justin Bieber’s net worth is estimated to be $285 Million.

How old is Justin Bieber?

How tall is Justin Bieber?

Justin Bieber has received a lot of hate throughout his career; however, he is now one of the richest singers in the world. That’s incredibly impressive, no matter what anybody may say.

What do you think about Justin Bieber’s net worth? Leave a comment below.

What is ASAP Rocky's net worth? With ASAP Rocky’s net...

Justin Gaethje has used the skills he learned as an amateur wrestler to become one of the highest paid mixed martial artists in the UFC.