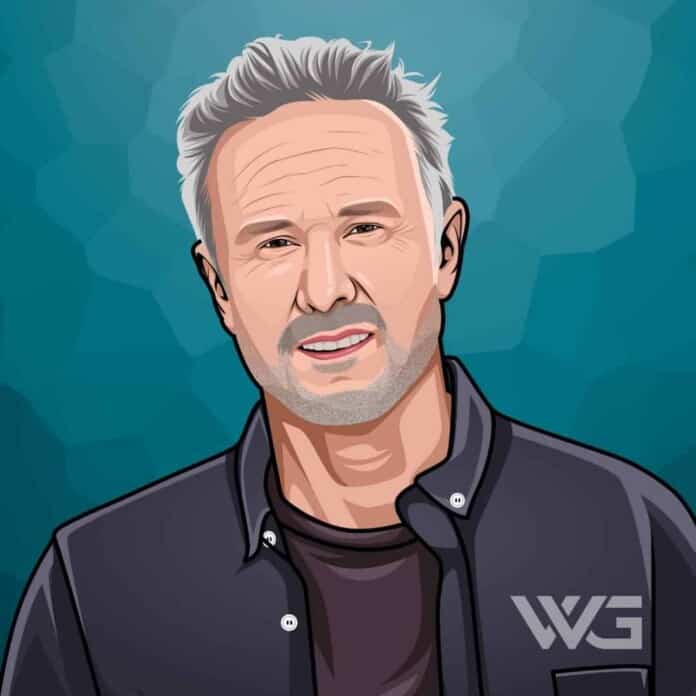 What is David Arquette’s net worth?

David Arquette is an American actor and former wrestler.

Arquette is best known during the mid-1990s after starring in numerous Hollywood films such as the ‘Scream’ series, ‘Wild Bill,’ ‘Never Been Kissed,’ ‘Buffy the Vampire Slayer,’ ‘See Spot Run’ and ‘Eight Legged Freaks.

He has also had several television roles, such as Jason Ventress in ‘In Case of Emergency.’ As a professional wrestler, he is best known for his 2000 stint in World Championship Wrestling, where he won the World Heavyweight Championship.

As of December 2022, David Arquette’s net worth is estimated to be roughly $30 Million.

David Arquette was born on the 8th of September, 1971, in Virginia. Arquette and his siblings all went into acting. One of his siblings, Alexis, died of a heart attack on a bacterial infection after living with HIV for some years.

The siblings grew up with an abusive mother and an alcoholic father. Arquette stated: “My mother was one of the most loving, sweet angelic people, but she was abusive to us. We had a turbulent childhood, but also a childhood filled with love.”

In 1990, Arquette made his television debut appearing in ‘The Outsiders.’

The following year, he appeared in the movie ‘Where the Day Takes You.’ It followed with ‘Cruel Doubt’ and ‘Buffy the Vampire Slayer’ and ‘An Ambush of Ghosts.’ He got his big break when he began starring in the ‘Scream’ franchise, which has grossed $608.5 million.

He has appeared in films throughout his career, including ‘The Darwin Awards,’ Hamlet 2′, and ‘Conception.’ Arquette lent his voice to the TV series ‘Pelswick,’ ‘Jake and the Never Land. Pirates,’ ‘Tron: Uprising.’

In 2014, he produced and starred in ‘Just Before I Go.’ The same year, he also began producing the series ‘Cleaners’ and numerous music videos.

Arquette starred in ’12 Hour Shift’ and ‘Spree’ and the documentary ‘You Cannot Kill David Arquette,’ which he also produced in 2020.

How Does David Arquette Spend His Money?

David Arquette is a wealthy actor best known for his performance in the ‘Scream’ film franchise. Arquette likes to give back to people.

Arquette loves to give back to people, and when he was a wrestler, he donated some of his money he made in WCW to the families of wrestlers Brian Pillman and Owen Hart.

Just like any other celebrity, Arquette is also a fan of traveling to different destinations.

Here are some of the best highlights of David Arquette’s career:

“You have to go on the ground and see with your own eyes, the people who have been affected by it, their process in how they’re combating it, and what the organization represents.” – David Arquette

“I try not to think too much about that. Because I did want to open myself up. So I knew I wanted that and they’re friends of mine, so it’s easy for them to get really comfortable and for everybody to get to know each other.” – David Arquette

“I hope I make people smile. That’s really my goal in life. To entertain people, to make them smile and laugh. I like doing emotional parts and things that go deeper and can get you to feel, but my main focus is laughter. It’s what I like to do in my life and what I like to do with my friends.” – David Arquette

“Yeah, I do feel like I achieved what I set out to do. Strange, I was doing it for others, you know, to prove myself to the wrestling community. But what I learned and it’s a common lesson in general, but it’s that you got to love yourself. Like, that’s what life’s about, even in breakups or whatever it’s like, you have to find it. You have to love yourself fully, or you can never really make it work.” – David Arquette

“You achieve what you set out to do, then what’s the next goal. With this, it’s to continue making people happier. I don’t know If I will wrestle that much more or anything, I’d love to be still involved in the wrestling world. I want to be a bridge with wrestling in Hollywood and try to set up some films. That’s the dream after this, or to get a show on TV.” – David Arquette

Now that you know all about David Arquette’s net worth and how he achieved success; let’s take a look at some of the lessons we can learn from him:

We’re all trying to figure out how to be the best person we can be. But, it takes time and a process of trial and error.

2. Going Through a Heartbreak

Divorce is a difficult process, and it’s heartbreaking. It can really mess with your head, but you need to be patient to handle heartbreaks.

Arquette means that when you’re an actor, you maybe will not be at the top of the list, and you can get a constant rejection, but it’s still okay.

How much is David Arquette worth?

David Arquette’s net worth is estimated to be $30 Million.

How old is David Arquette?

How tall is David Arquette?

He has more than 130 acting credits to his name. He has starred in movies and series such as ‘Buffy the Vampire Slayer,’ ‘Airheads’ and ‘Never Been Kissed,’ Blossom,’ Beverly Hills,’ ‘90210’, Friends’ and The Hughleys.’

As of December 2022, David Arquette’s net worth is estimated to be roughly $30 Million.

What do you think about David Arquette’s net worth? Leave a comment below.