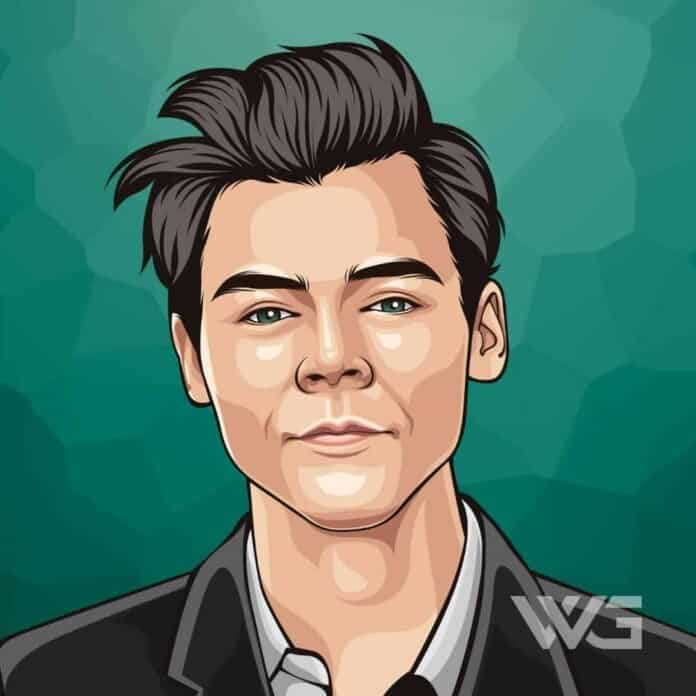 What is Harry Styles’ net worth?

Harry Edward Styles is an English singer, songwriter, and actor from Redditch.

Styles rose to prominence as a member of the worldwide famous boy band One Direction. The band has released five studio albums and won several awards. His debut single, ‘Sign of the Times’, was released in 2017.

Harry Edward Styles was born on the 1st of February, 1994, in Redditch.

Styles is the son of Anne Cox and Desmond Styles. He has an elder sister Gemma. His parents divorced when he was 7 years old, and he spent most of his childhood in Holmes Chapel in Cheshire.

Since he was a kid, Styles was fascinated by music. He enjoyed singing and he even performed as the lead singer for his school band, White Eskimo. Elvis Presley, Freddie Mercury, and The Beatles were his earliest influences.

Harry Styles began his music career in 2010 when he auditioned as a solo candidate for the series of the British televised singing competition ‘The X Factor’. He could not make it to the finals but was later selected along with four other fellow competitors to form a new group act for the remainder of the X Factor.

Styles named the boy band ‘One Direction’ and their first song which was also their qualifying song at ‘Judge’s houses’, was a version of ‘Torn’.

Their performance gained huge popularity in the UK and they became the biggest contenders of the coveted title and people’s favorite. After X Factor, One Direction was signed in by Simon Cowell’s Syco Music Records for a reported £2 million contract.

In 2011, One Direction came up with their autobiography, ‘One Direction: Forever Young’ which gave a first-hand account of their X-Factor Story. They went on the X-Factor Live Tour performing in UK, Stockholm, London, and Los Angeles.

The same year they released their debut album ‘Up All Night’ which bowed at number two on the UK Albums Chart.

In 2015, Zayn Malik, a member of One Direction, left the group. However, they continued working on their fifth album. The album ‘Made in A.M. was dropped the same year. It debuted at number one on the UK Albums Chart and at number two on the US Billboard 200.

The following year, Styles signed a record deal with Colombia Records as a solo artist. He contributed to Snow Patrol’s ‘Johnny McDaid’ and OneRepublic’s ‘Ryan Tedder’, writing for them.

Here are some of the best highlights of Harry Styles’ career:

“You get moments all the time that kind of make you pinch yourself, some of them make you quite emotional. Winning a BRIT was a big moment because we were just so excited to be at the awards in the first place. Selling out Madison Square Garden was pretty amazing too. Then we woke to the news that our UK tour was sold out. It was crazy.” – Harry Styles

“I think, you know, we entered the ‘The X Factor’ in the U.K., and you kind of want someone who knows what they’re talking about to tell you if you’re any good or not instead of just your mum saying that you like it when you sing.” – Harry Styles

“You’re never going to get used to walking into a room and have people screaming at you. There’s a lot of things that come with the life you could get lost in. But you have to let it be what it is. I’ve learned not to take everything too seriously.” – Harry Styles

Now that you know all about Harry Styles’ net worth, and how he achieved success; Let’s take a look at some of the best lessons we can learn from him and his lyrics:

1. Meet Me In The Hallway

Always push yourself, always aim to be a better person. It’s important, y’know?

If you break up with someone, always wish them the best. Not all relationships are going to work but it’s time to get over it. K?

If you break up with someone, maybe don’t write a song about them because the entire world will figure it out, tweet about it and then you’ll have to face the questioning.

How much is Harry Styles worth?

Harry Styles’ net worth is estimated to be $90 Million.

How old is Harry Styles?

How tall is Harry Styles?

Harry Styles is best known for being a member of the famous band One Direction. The band has broke several records and has become the only boy band to have its first five albums in a calendar year. Today Styles is considered to be one of the most popular singers in the world.

What do you think about Harry Styles’ net worth? Leave a comment below.