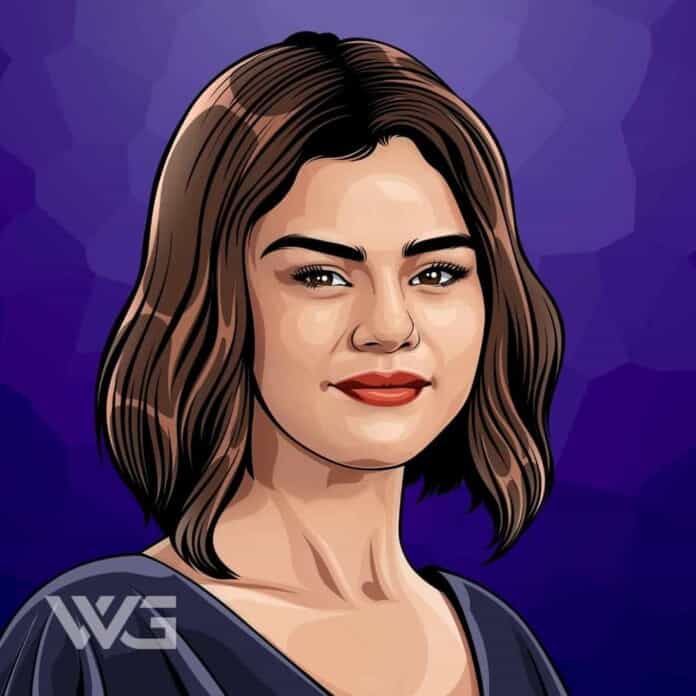 What is Selena Gomez’s net worth?

Selena Gomez’s net worth is approximately $95 Million, and she is currently one of the most popular icons in the world.

Selena Marie Gomez is an American singer, producer, and actor from Grand Prairie. Gomez is mostly known for her appearance on the Disney Channel television show ‘Wizards of Waverly Place’. After the show, she gained a lot of recognition.

Gomez later joined the band ‘Selena Gomez & the Scene’, where they released albums such as ‘Kiss & Tell’ (2009) and ‘A Year Without Rain’ (2010). Gomez later starred in several movies and started her career as a solo artist.

In 2017 Billboard reported that Gomez has sold over 7 million albums and 22 million singles worldwide.

Selena Marie Gomez was born in Grand Praire, Texas on the 22nd of July, 1992. Gomez is the daughter to Amanda Cornett and Ricardo Joel Gomez.

Her mother is from Italian ancestry and her father is of Mexican ancestry. Gomez’s grandparents often helped to raise Gomez throughout her childhood. She attended Danny Jones Middle School until eighth grade.

Gomez was given a role in 2007 as the pop star ‘Mikayla’ in ‘Hanna Montana’. She later auditioned for a role in the Disney series ‘Wizards of Waverly Place’ where she’s seen playing the leading role of ‘Alex Russo’.

She pursued her musical career when she started her solo musical debut in 2012.

Selena Gomez has been nominated on 125 occasions and has won some of the best awards and her songs, as well as acting performances. After her performance in ‘Wizards of Waverly Place’, she has starred ‘Walker, Texas Ranger: Trial by Fire’ and ‘Spy Kids 3-D: Game Over’.

From 2010-12 ‘Bravo Otto’ awards were presented to Gomez on six occasions. She was also declared the ‘Woman of the Year’ by the ‘Glamour Awards’.

She continued to pursue her musical career releasing ‘Stars Dance’. Gomez released the single ‘Good for You’ in 2015, and in October of that year she released her fifth album ‘Revival’.

She enjoyed more success in 2017 when she released tracks as ‘Bad Liar’ and ‘It Ain’t Me’. Gomez also teamed with rapper Gucci Mane for ‘Fetish’ and DJ Marshmello for ‘Wolves’. In 2018 she dropped the track ‘Back to You’ for Netflix’s TV-show ’13 Reasons Why’.

The same year she also revived her role as Mavis in Hotel Transylvania 3. Gomez is also set to voice a character in the upcoming ‘The Voyage of Dr. Doolittle that will be on the big screen in 2019.

Here are some of the best highlights of Selena Gomez career:

“I’m not different from what I put out there. I’ve been very vulnerable with my fans, and sometimes I say things I shouldn’t. But I have to be honest with them. I feel that’s a huge part of why I’m where I am.” – Selena Gomez

“The older I get, the prouder I am to be a woman in the industry. When I was younger and running around all the time on tour, I don’t think I took the time to notice how being a woman in my position is really a gift. I want to make sure I utilize all that power.“ – Selena Gomez

“I feel very empowered and confident and comfortable with where I am. And I think it took me a long time to get there because, you know, the past year was so interesting because I’ve never been body-shamed before… “ – Selena Gomez

“I feel like I’m just starting, but I think I’d be fine if it all went away. I get that from my mother. From the moment I started singing, she always reminded me that all of this was a privilege, and could be taken at any moment. So singing is not how I define myself. I try to keep my identity rooted in my friendships and my faith.” – Selena Gomez

“It’s about being strong, which means being comfortable with who I am… I think women, especially my age, can relate. You’re figuring out who you are and there are so many different levels of emotions that you go through. The best is when you feel confident, beautiful, and comfortable with yourself.” – Selena Gomez

Now that you know all about Selena Gomez’s net worth, and how she achieved success; let’s take a look at some of the lessons we can learn from her:

1. Be eager for new experiences

Be eager for new experiences. Once we feel that we are safely ensconced within our comfort zones, we become hesitant to change or try out new things. There is always a risk of failing, but instead of having that fear, it’s easier to achieve something outside your comfort zone.

2. Stay strong in the middle of adversity

Problems are part and parcel of life. Stay strong and never give up in what you believe in. Most people cry others experience depression, some find ways to escape. The best solution is to face adversity head-on with acceptance and determination.

Instead of scheming to carry out a cover-up of our mistakes, we can consider them as growth opportunities that will enable us to become better persons. Mistakes are always lessons.

How much is Selena Gomez worth?

Selena Gomez’s net worth is estimated to be $95 Million.

How old is Selena Gomez?

How tall is Selena Gomez?

Selena Gomez has one of the highest followed Instagram accounts worldwide, and it doesn’t stop there. Gomez has sold millions of copies of her albums and song throughout her career.

She is at the age of 26 and has already built an incredible high net worth, as well as been voted one of the most beautiful women worldwide.

As of February 2023, Selena Gomez’s net worth is estimated to be $95 Million.

What do you think about Selena Gomez’s net worth? Leave a comment below.

What is Paris Hilton's net worth? Introduction As of ,...