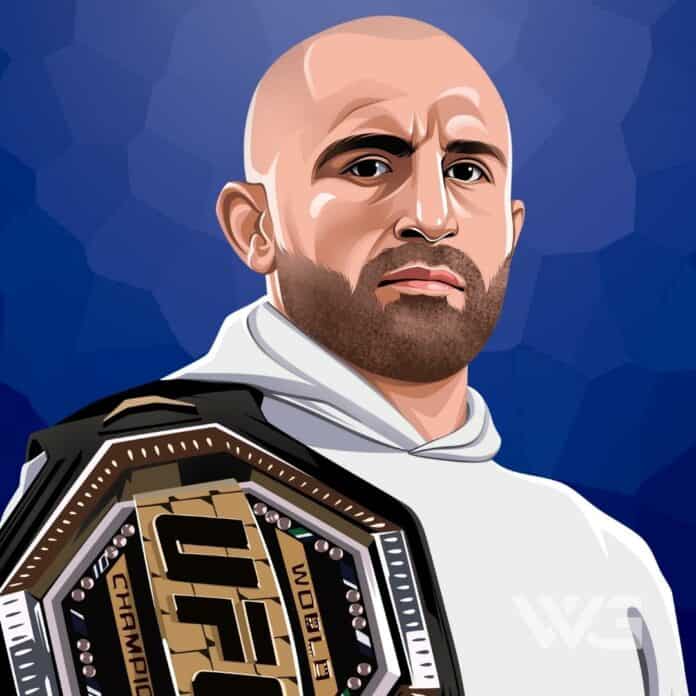 What is Alexander Volkanovski’s net worth?

He was a professional boxer while in Australia before beginning a career in mixed martial arts and made his UFC debut in 2016.

As of January 2023, Alexander Volkanovski’s net worth is estimated to be $3.5 Million.

Alexander Volkanovski was born 29 September 1988 in New South Wales, Australia and spent his childhood in the city.

Volkanovski spent his childhood practicing kickboxing and Greco-Roman wrestling while also playing rugby, which became his main focus in his teenage years.

He enjoyed a solid rugby career, where he was a semi-professional, but decided to quite at 23 years old to begin training in mixed martial arts.

During his amateur career, Volkanovski found instant success and won his first four matches before turning professional and making his debut at Revolution at the Roxy in 2012.

After assembling a 13-1 career record, Volkanovski made his UFC debut at UFC Fight Night: Whittaker vs. Brunson with a technical knockout of Yusuke Kasuya in the second round.

Volkanovski quickly became a staple for Ultimate Fighting Championship and won his first seven matches before UFC President Dana White gave him a title shot in 2019.

At UFC 245, Volkanovski won the UFC Featherweight Championship by defeating Max Holloway via unanimous decision, and he’s since gone on to defend the title multiple times.

Like many that have found their way to the UFC, Volkanovski was earning enough to make a livable wage, but wasn’t getting headliner money.

As his MMA career started to take off and he was climbing the featherweight division rankings, Volkanovski started earning higher payouts.

Volkanovski has seen his salaries increase tenfold over the past few years thanks to being in the title scene, and there’s no telling just how high his payouts will become.

He figures to be a championship contender for years to come, which allows Volkanovski’s net worth to continue to rise.

Alexander Volkanovski had earned some money for himself as a semi-pro rugby player in Australia, but it wasn’t until his professional MMA career started that he began padding his net worth.

Volkanovski has seen a tremendous increase in his net worth as his salaries have risen and is now a millionaire.

Here’s a breakdown of Alexander Volkanovski’s annual net worth:

Volkanovski has gone from fighting in small venues to battling at UFC Fight Island and T-Mobile Arena in Las Vegas after becoming a headliner.

He is now one of the highest paid fighters as a champion and the former rugby player is showing that he made the right choice in career changes.

Alexander Volkanovski and his brother were raised in New South Wales by his parents Tony (form North Macedonia) and Mary (from Greece).

Throughout most of his career, Volkanovski has been married to Emma Volkanovski, with the fighter tying the knot with the Instagram model back in 2015.

Along the way, the Volkanovskis have had two children with daughters Ariana and Arlie born in 2015 and 2017, respectively.

Since beginning his MMA career, Alexander Volkanovski hasn’t had a shortage of awards coming his way.

From year-end awards to accolades for winning title fights, Volkanovski is one of the most decorated current fighters.

Here are the top awards and achievements from Alexander Volkanovski’s career thus far:

Still in the prime of his career, Volkanovski figures to add to his already impressive resume of awards and achievements.

Each title defense is another step closer to the UFC Hall of Fame, which would be the ultimate achievement for any fighter.

How Does Alexander Volkanovski Spend His Money?

Alexander Volkanovski is working hard at making himself one of the richest MMA fighters in the world and is now a millionaire as a result of his hard work.

Though not in one of the most expensive houses in the world, Volkanovski did spend big on his home in Windang Beach for $1.2 million.

Volkanovski is too busy raising his daughters and buying them toys to drop money on the most expensive cars in the world or fancy clothes.

Still, Volkanovski has a taste for speed, and has tested out race cars while owning a GMC Terrain for himself that costs around $30,000.

From fighting amateur matches to winning a title in the UFC, there have been a lot of peak moments Alexander Volkanovski in his illustrious career.

There were some firsts and some high points that will define Volkanovski’s legacy to this point, with some truly standing out above the rest.

Here are some of the best highlights of Alexander Volkanovski’s career:

Volkanovski hasn’t finished adding to his legacy, especially as he has a stranglehold on the UFC featherweight division.

Each UFC fight for Volkanovski is an opportunity to add another highlight, and the former kickboxer turned MMA legend is certain to have many more bouts.

Alexander Volkanovski isn’t one of the biggest trash talkers in the Ultimate Fighting Championship, but he does have quite a bit to say.

Volkanovski has talked about his upbringing in Australia to his time in the UFC where he’s become one of the best fighters in the world.

Here are our favorite quotes from Alexander Volkanovski:

There aren’t many UFC fighters that have the type of background that Alexander Volkanovski has in terms of experience.

From participating in other sports to getting his MMA training in various styles from Brazilian jiu-jitsu to kickboxing, Volkanovski is a well-rounded man.

Volkanovski is working on becoming a legend and mentioned alongside the likes of Chuck Lidell, Tito Ortiz and other UFC legends.

Now that you know all about Alexander Volkanovski’s net worth, there’s much to be learned from the rugby player turned UFC standout.

Here are some of the best success lessons to learn from Alexander Volkanovski:

1. Take Care Of Your Body

Back when he was playing rugby, Alexander Volkanovski had to have a lot of mass and was over 210 pounds, but changed dramatically when entering mixed martial arts.

While he’s always been in good shape, Volkanovski cut a lot of weight and is now in the best shape of his life.

He credits taking care of his body with proper diet and exercise as one of the key reasons he’s been able to become a UFC champion.

If you were to walk into Alexander Volkanovski and his family on the street, you probably wouldn’t guess that he’s a UFC fighter.

Volkanovski is a family man through-and-through, and having two young daughters keeps him focused on what’s truly important in life.

He has said that he’s very confident in his abilities as a fighter, but he’s not cocky and doesn’t like to hype up his opponent with trash talk.

When people took a look at Alexander Volkanovski during his rugby days, they didn’t think he had a chance in mixed martial arts.

Those opinions from strangers would change after they saw him perform, though, as the rugby enforcer would lift people much larger than him.

Volkanovski has shown that your size doesn’t determine your ability, and he’s scrapped his way to the top of the world in mixed martial arts.

Alexander Volkanovski is one of those highly gifted athletes that was able to win prestigious UFC gold after starting in another sport.

The Australian fighter who has specialized in kickboxing and Muay Thai has shown he belongs in the discussion of best pound-for-pound fighters in the UFC.

As he continues his championship defense, Volkanovski’s grip on the UFC Featherweight Championship becomes tighter and more lucrative, making him richer in the process.

As of January 2023, Alexander Volkanovski’s net worth is estimated to be $3.5 Million.

What do you think about Alexander Volkanovski’s net worth? Leave a comment below.