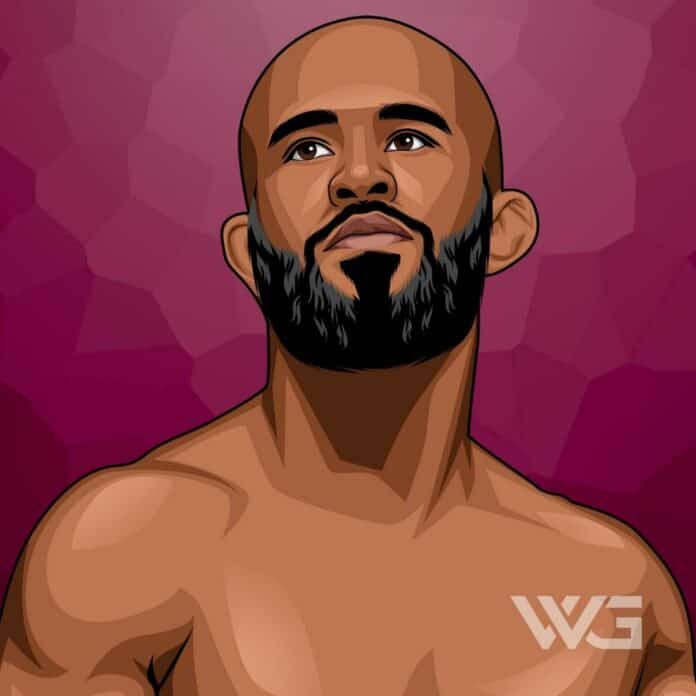 What is Demetrious Johnson’s net worth?

Demetrious Johnson is an American mixed martial artist who has earned the ONE Flyweight World Grand Prix and Flyweight Championship.

Johnson is a former UFC Flyweight Champion, spending seven years with the company before being traded to ONE.

As of January 2023, Demetrious Johnson’s net worth is estimated to be $6 Million.

Demetrious Johnson was born August 13, 1986 in Madisonville, Kentucky and grew up in Parkland, Washington where he attended Washington High School.

Johnson was a gifted amateur wrestler and received scholarship offers, but decided to stay near home and attend Pierce College.

On the side, Johnson had been training in mixed martial arts and began his MMA career in his home state with two wins at the amateur level.

In 2007, Johnson made his professional debut by defeating Brandon Fields at AX FC 16: Annihilation and started his career with a 10-0 record.

Demetrious Johnson joined World Extreme Cagefighting in 2010 and went 2-1 with the company, including wins over Nick Pace and Damacio Page.

In 2011, Johnson made his UFC debut with a victory over Norifumi Yamamoto and got a title shot against Dominick Cruz for the UFC Bantamweight Championship.

Though Johnson lost, Joe Rogan praised Johnson’s abilities and said that he would be a great in the flyweight rankings, so Dana White added the division to the UFC.

Johnson’s flyweight career started off with a draw against Ian McCall, and then a victory in the rematch to set him up for a title shot against Joseph Benavidez in 2012.

At UFC 152, Johnson became the inaugural flyweight champion and retained the title for six years before losing to Henry Cejudo at UFC 227 and was traded to ONE for Ben Askren.

Demetrious Johnson has earned a solid salary over his career thanks to many of his matches being for championships.

The mixed martial artist has over a dozen title fights in his UFC career and earned over $350,000 in each year as a champion.

After being traded to ONE Championship, Johnson has received a reported $750,000 per year with the potential for bonuses.

The outstanding fighter is one of the marquee names for ONE Championship, and his salary reflects his importance in the company.

By the time that he started his UFC career, Demetrious Johnson had already established a solid net worth and saw it skyrocket after becoming champion.

The Brazilian jiu-jitsu expert boosted his net worth through 11 consecutive title defenses before joining ONE Championship.

Here’s a breakdown of Demetrious Johnson’s annual net worth:

Johnson is one of the richest MMA fighters in the world, which shouldn’t come as a surprise given his impressive record.

The American fighter received endorsements from Normatec and EA Sports to help boost his net worth along the way.

Throughout much of his career, he has been married to Destiny Johnson, whom he credits for changing his life for the better.

Since their marriage in 2012, the couple has had three children born between 2013 and 2018, with two sons and one daughter.

Many consider Demetrious Johnson to be the best fighter in UFC flyweight history, and it would be hard to argue given his track record.

For several years, Johnson was the UFC Flyweight Champion and continued his success into ONE Championship.

Here are some of Demetrious Johnson’s top career awards and achievements:

Demetrious Johnson is one of the most decorated fighters in UFC history, and his career with ONE Championship got off to a great start.

Johnson will certainly go down as one of the best fighters of his generation as his list of accolades is longer than almost any fighter.

How Does Demetrious Johnson Spend His Money?

Despite being one of the highest-paid men in mixed martial arts, Demetrious Johnson isn’t much of a big spender.

He has a modest home in Parkland, Washington and his own charity foundation in the area that helps to feed the homeless.

Johnson had never really cared about making a lot of money, which was part of why he and Dana White had a falling out at UFC, with Johnson being too modest and focusing on fighting rather than promoting.

Demetrious Johnson is in that same upper tier with the likes of Michael Bisping and Quinton Rampage Jackson as the top names in UFC history.

Johnson has a long list of milestone moments that go back to his time in high school, and his professional career has been one highlight after another.

Here are some of the best highlights of Demetrious Johnson’s career:

Though his time in the UFC came to an end, Demetrious Johnson has been able to be the biggest name in ONE Championship.

Between his fights with Ian McCall and John Dodson to his championship victory with his new company, Johnson has just about done it all.

Demetrious Johnson is one of the top fighters of his generation alongside the likes of Anderson Silva and Jon Bones Jones, though he is a bit more subdued on the microphone.

That doesn’t mean that Johnson hasn’t had some memorable lines, though, as he’s used to speaking in public on his Twitch stream when playing on his Microsoft Xbox.

Here are our favorite quotes from Demetrious Johnson:

Demetrious Johnson didn’t have the best upbringing, but is leading a happy and healthy life with his wife and three children.

Johnson has learned a lot about life and fighting throughout his career, and is willing to be a teacher while giving back to his community.

Now that you know all about Demetrious Johnson’s net worth, there’s plenty to learn from the former UFC Flyweight Champion.

Here are some of the best success lessons to learn from Demetrious Johnson:

Though he had one of the most successful UFC careers of all-time, Demetrious Johnson was never the highest-paid.

Instead, he was much more focused on making sure his home life was at its best instead of making headlines through trash talk and promoting himself nonstop.

The result has been a great personal life for the man known as Mighty Mouse and still plenty of money to live off of.

2. Take Care Of Your Body

Fitness and nutrition is vital for everyone, not just MMA fighters, and Demetrious Johnson is a big advocate for both.

Johnson makes sure that he takes time to exercise each day, whether it be lifting weights or training in Brazilian jiu-jitsu.

He also makes sure that he and his family are eating healthy, and everyone in his home has been able to enjoy great health to this point.

One of the reasons that Demetrious Johnson hasn’t been a big trash talker in his career is because he has too much respect for his opponents.

It’s best to never underestimate any potential opponents, and Johnson studies them immensely on a professional level instead of making things personal.

People show the same type of respect to Johnson as he makes it nearly impossible to get under his skin, and his fights have been legendary in his career.

Demetrious Johnson has accomplished a lot as a mixed martial artist, including being the longest-reigning champion in UFC history.

Now a member of ONE Championship, Johnson continues to add to his legacy and net worth by taking on the biggest names in mixed martial arts.

Even after his fighting career is over, Johnson will certainly be present in the media and making money through his eSports ventures.

As of January 2023, Demetrious Johnson’s net worth is estimated to be $6 Million.

What do you think about Demetrious Johnson’s net worth? Leave a comment below.