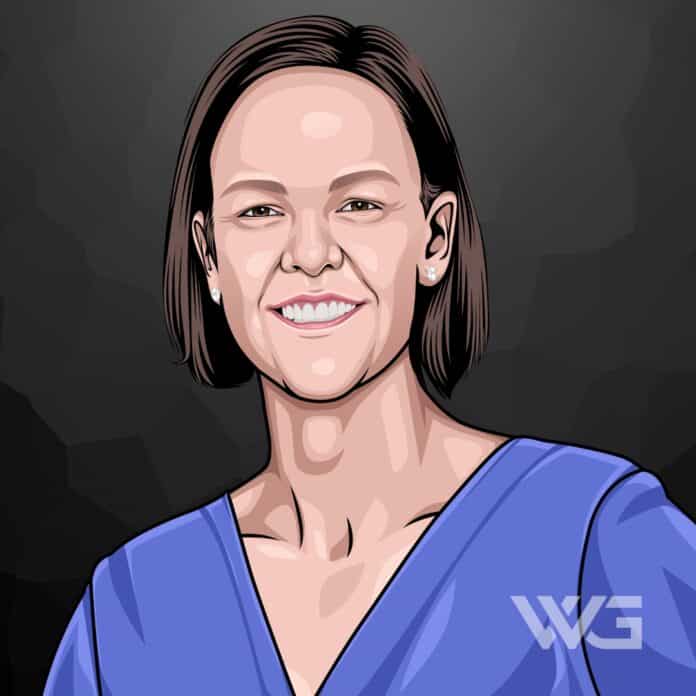 What is Lindsay Davenport’s net worth?

While she has since retired to become a commentator on the Tennis Channel, Davenport has earned an incredible net worth as a singles world No. 1 tennis player.

As of November 2022, Lindsay Davenport’s net worth is estimated to be $20 Million.

Coming from an athletic family, Lindsay started playing tennis when she was only six, coached by Robert Lansdorp, a former coach of Tracy Austin, a former World No. 1 tennis star.

When she was just 14, Davenport joined the United States Tennis Association junior national team, where she excelled in both singles and doubles, winning the Clay Court Championships in 1991 and the Junior U.S. Open in 1992.

In 1995, Davenport won the Internationaux de Strasbourg in France, later making it to the fourth round of Wimbledon before being upset by Mary Joe Fernandez.

Her first Grand Slam singles title came at the 1998 U.S. Open, where she defeated Venus Williams in the semifinals.

In 2000, Davenport won the singles at the Australian Open without the loss of a single set and reached the Wimbledon final before being defeated by Venus Williams.

Davenport brought home seven singles titles in 2001 but failed to win any in 2002.

Her next biggest winning streak came in 2004, where she won a tour-high seven titles and finished the year with a number one ranking for the third time in her career.

Lindsay made history in 2005 when she defeated the world No. 3 tennis player, Maria Sharapova, 6-0 and 6-0, marking the first time a top 3 ranked player has been shut out of the WTA tour.

She continued to play exceptionally well in the following years, despite never making it to another Grand Slam final.

In 2011, Davenport won the Women’s Legends Doubles at the French Open, followed by the Wimbledon Invitational Doubles Event, both times partnered with Martina Hingis.

Lindsey stepped away from the court after the 2001 season, announcing she was pregnant with her third child.

While she hasn’t participated in competitive tennis since, she started coaching Madison Keys before the 2015 season and has been serving as a commentator on the Tennis Channel.

On the court, Lindsay Davenport became one of the richest tennis players in the world and the 10th highest earning female tennis player in history.

While we don’t have information about everything Davenport has earned during her career, we do know a bit about how much she’s gained overall.

Although Davenport is now eighth in all-time rankings when it comes to career earnings, she continues increasing her net worth today as one of the most popular commentators on the Tennis Channel.

Lindsay Davenport has been married to Jon Leach, an investment banker and former University of Southern California All-American tennis player, since 2003.

Davenport and his husband own numerous properties, including ones in Laguna Beach, California, and Kailua-Kona, Hawaii.

On social media, Lindsay is active on her official Twitter account, where she posts about tennis, projects she participates in, and her family.

Lindsay Davenport has enjoyed a long and highly successful career in tennis, which has allowed her to win numerous prestigious awards.

While all of her victories have been significant, some of her accolades stand out more than others.

Here are some of Lindsay Davenport’s most important career awards and achievements:

Despite not being as well-known as Serena Williams in the mainstream, Lindsay Davenport has earned many important awards during her time on the court.

How Does Lindsay Davenport Spend Her Money?

Lindsay Davenport has owned many different houses, including one in Laguna Beach, which she sold in 2015 for $3.8 million.

In Hawaii, Davenport owns another home in Kailua-Kona, located on a golf course, just 30 minutes away from some of the most iconic beaches on the Big Island.

This home boasts ocean views, a spa, an infinity pool, plus access to the private golf club, including a restaurant, movie theater, and bowling alley.

Reportedly this home cost Davenport $4.25 million, and she has owned it since 2016.

Lindsay Davenport has achieved a lot during her long career as a professional tennis player, but some of her most significant high points have impacted her more than others.

Although all of her milestones are noteworthy, these are the ones that helped grow her success the most overall.

Here are some of the best highlights of Lindsay Davenport’s career:

Davenport has also won 38 WTA Tour Doubles titles and a gold medal at the Atlanta Olympics in 1996.

Despite her success, Lindsay Davenport remained remarkably humble on and off the court.

Fans have caught glimpses of how she handled matches in the many interviews she’s done, as well as an insight into how she stays positive.

Here are our favorite quotes from Lindsay Davenport:

There is a lot we can learn from Lindsay Davenport and her long career as a tennis player.

Now that you know all about Lindsay Davenport’s net worth, we can look at what she can teach us about achieving success in our own endeavors.

Here are some of the best success lessons to learn from Lindsay Davenport:

1. Turn Failure Into Something Positive

Although failure can seem like a major blow to your success, it shouldn’t be something that holds you back.

Anytime you are faced with failure, you should always try to find a silver lining and turn that negative into a positive so that you can learn from it and move on.

When trying to find success, having a solid support network is essential.

Whether it’s a friend, family member, or mentor, having someone you can rely on can make staying motivated much easier.

3. Don’t Compare Yourself To Others

Success is relative only to the person achieving it, and comparing yourself to others will only leave you coming up short.

Focus on building yourself up, and don’t worry about what others around you are doing or have done. You’re planning for your success, not theirs.

Lindsay Davenport is one of the world’s most successful female tennis players, and she earned a substantial net worth as one of the highest-paid women on the court.

While she has been retired since 2011, she has continued to grow her net worth as a commentator on the Tennis Channel.

Make sure to check back often so that you don’t miss any updates impacting her fortune.

As of November 2022, Lindsay Davenport’s net worth is estimated to be $20 Million.

What do you think about Lindsay Davenport’s net worth? Leave a comment below.