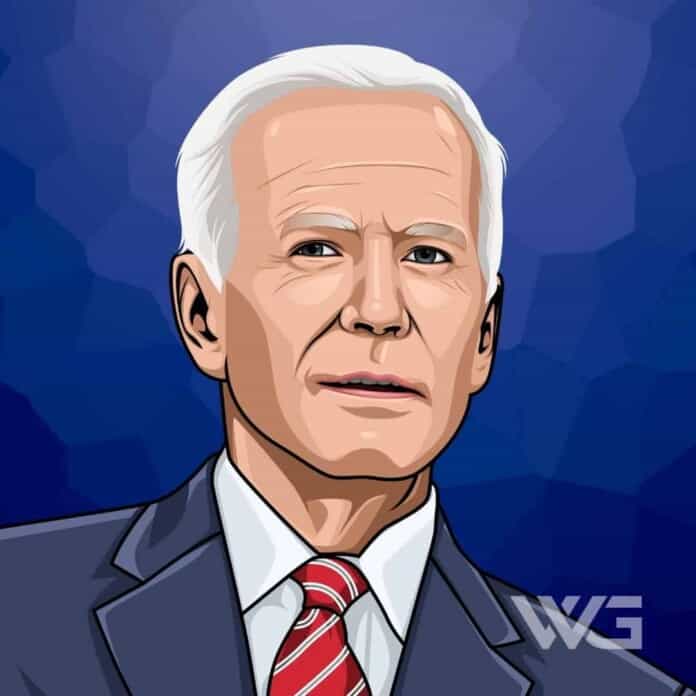 What is Joe Biden’s net worth?

Joe Biden is an American politician and the president-elect of the United States.

He defeated Donald Trump in the 2020 presidential election. Biden has served as the 47th vice president from 2009 to 2017. Between the years 1973 to 2009, he represented Delaware in the United States Senate.

As of February 2023, Joe Biden’s net worth is estimated to be roughly $9 Million.

Joseph Robinette Biden Jr. was born on the 20th of November, 1942, in Pennsylvania.

Biden is the son of Catherine and Joseph Biden Sr. He is the oldest child, and he has a sister and two brothers named Valerie, Francis, and James. His father had French, English, and Irish ancestry.

His father was initially wealthy but suffered some financial setbacks when Biden Jr. was born. For many years the family lived with Biden’s grandparents.

Biden started his career by practicing at a law firm, and he was also active on the political scene as a member of the Democratic Partin in 1970. In 1972, he ran for the United States Senate. When he was 29 years old, he was the 5th youngest U.S senator to be elected in the nation’s history.

For the next year, it was difficult for Biden to manage his political career. After a while, he fulfilled his political duties and gained the respect of his colleagues.

In 2009, Obama became the President of the United States, and Biden played a major part in helping Obama stabilize the American economy in the global economic recession.

Obama and Biden proved to be popular among the citizens, and in his second term, Biden was chosen by Obama to head the Gun Violence Task Force. In 2019, he announced his bid for the Democratic presidential nominee candidate for the 2020 election.

Biden’s son, Hunter Biden, has been under federal investigation for various ‘business activities’, as well as in the news for his various antics.

The same year, Joe Biden chose to pick Kamala Harris as his running mate for the election. He defeated Donald Trump, and he will be the 46th president of the United States on the 20th of January, 2021.

How Does Joe Biden Spend His Money?

Joe Biden has an impressive net worth, and he likes to spend his money on lavish cars and real estate. Biden has several Corvette cars in his collection.

In Joe Biden’s car collection, we can see many lavish cars such as the 1967 Corvette Convertible, a Corvette GS, a GMC Yukon, and a Cadillac Limousine.

Here are some of the best highlights of Joe Biden’s career:

“For any young democracy, the most difficult but important step is burying the legacy of tyranny and establishing an economy and a government and institutions that abide by the rule of law. Every country faces challenges to the rule of law, including my own.” – Joe Biden

“Over the objections, where they sound like squealing pigs, over the objections of Romney and all his allies, we passed some of the toughest Wall Street regulations in history, turning Wall Street back into the allocator of capital it always has been and no longer a casino. And they want to repeal it.” – Joe Biden

“It is no secret that I believe my son; Attorney General Beau Biden would make a great United States Senator – just as I believe he has been a great Attorney General. But Beau has made it clear from the moment he entered public life, that any office he sought, he would earn on his own.” – Joe Biden

“Obama and Biden want to raise taxes by a trillion dollars.’ Guess what? Yes, we do in one regard: We want to let that trillion-dollar tax cut expire, so the middle class doesn’t have to bear the burden of all that money going to the super-wealthy. That’s not a tax raise. That’s called fairness where I come from.” – Joe Biden

Now that you know all about Joe Biden’s net worth and how he achieved success; let’s take a look at some of the best lessons we can learn from him:

1. What The Reality Means

Reality has a way of intruding. Reality eventually intrudes on everything.

Failure at some point in your life is inevitable, but giving up is unforgivable.

Our future cannot depend on the government alone. The ultimate solutions lie in the attitudes and the actions of the American people.

The greatest gift is the ability to forget – to forget the bad things and focus on the good.

Joe Biden – Net Worth Over the Years

How much is Joe Biden worth?

Joe Biden’s net worth is estimated to be $9 Million.

How old is Joe Biden?

How tall is Joe Biden?

Joe Biden is the president-elect of the United States and will become the president on the 20th of January, 2021. He is probably best known for being the oldest person to elect to the White House.

He served as the 47th vice president from 2009 to 2017. Thanks to his hard work and determination, he has to stand up for himself and wen ton to become a very successful man. In 1972, he won the United States Senate election in Delaware when he was 29 years old.

As of February 2023, Joe Biden’s net worth is estimated to be roughly $9 Million.

What do you think about Joe Biden’s net worth? Leave a comment below.