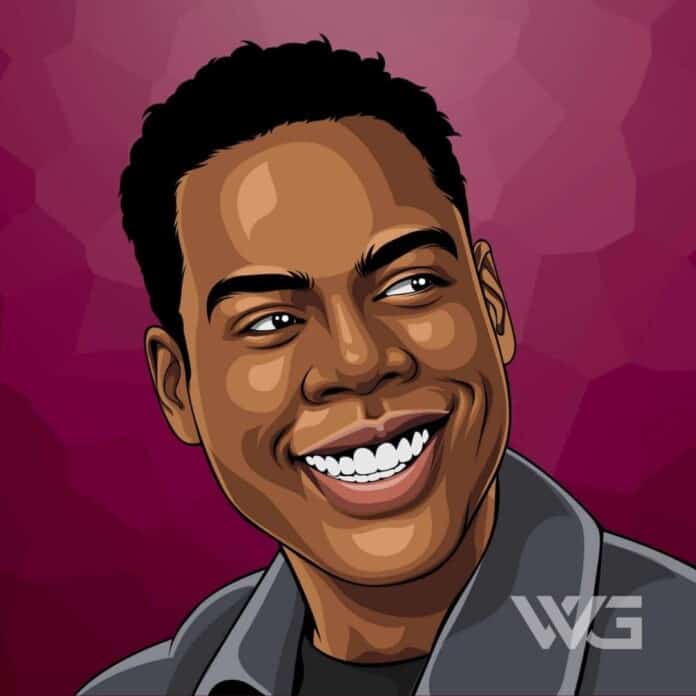 What is Chris Rock’s net worth?

Chris Rock is an American comedian, actor, writer, producer, and director. Rock began as a stand-up comedian and was able to progress into acting and producing due to his success and popularity.

Since he was able to diversify his career and achieve a high level of success in multiple areas of entertainment; Chris Rock has become one of the richest comedians in the world.

However, he grew up in Brooklyn, New York, and his mother worked as a teacher/social worker; whilst his father was a newspaper delivery man, and truck driver.

Rock was bullied at high school, and eventually, it led to his parents pulling him out of James Madison High School. He ended up dropping out of school altogether, but later earned a GED. Before comedy, Chris Rock worked at various fast food restaurants.

Rock began doing stand-up comedy in 1984 in New York City’s Catch a Rising Star. He slowly rose up the ranks of the comedy circuit in addition to earning bit roles in the film I’m Gonna Git You Sucka and the TV series Miami Vice.

Chris Rock has starred and featured in a whole list of films and TV shows. The list is huge, however we have mentioned some of the greats in the highlights section below.

As of December 2022, Chris Rock’s net worth is $60 Million, making him one of the richest comedians in the world, with Jerry Seinfeld currently being the richest.

Here are some of the best highlights of Chris Rock’s career:

“There are only three things women need in life: food, water, and compliments.” – Chris Rock

“Charlie Brown is the one person I identify with. C.B. is such a loser. He wasn’t even the star of his own Halloween special.” – Chris Rock

“I live in a neighborhood so bad that you can get shot while getting shot.” – Chris Rock

“Yeah, I love being famous. It’s almost like being white, y’know?” – Chris Rock

View our larger collection of the best Chris Rock quotes!

10 Rules for Success from Chris Rock

Now you know Chris Rock’s net worth and how he became successful, we’ve put together the 10 rules for success that were covered in the video above. Here are 10 success lessons from the one and only Chris Rock:

1. Don’t Listen to Others

At the end of the day, you’re the one living your life. You should be able to make your own decisions, based on what you love, and what you believe in. Other people have their own agendas, and will try to force their opinion onto you.

Rock does whatever he’s called to do. Comedy was his calling, acting was his calling. Whatever he does, he has to have a strong emotional attachment to it, in order to focus his efforts on it effectively.

You read above on how tough Chris Rock’s life at school was. He was bullied so much that he dropped out; but when asked about it, he says he wouldn’t be here without that experience, and there’s nothing he could have done about it.

The 4th success lesson from Chris Rock is to be curious. He says that when he’s working on new movies, he tries to pick a type of movie that he’s never seen done before, because it sparks his curiosity.

5. Care About Your Fans

Your fans are the reason for your success. If they didn’t enjoy your work, you wouldn’t be successful. Caring about your fans is crucial to keep your career going in the long run.

6. Be Proud of Your Work

7. Work With People You Know

If you work with people you know, you already have an idea of how well something can turn out. You can rely on those people to get the job done, and you’re also helping elevate each other.

8. Create For Your Audience

Creating what you want to create is great, but once you have a big audience, creating for them will go a long way. After all, they’re the people who keep viewing your work, so keeping them happy is the key to keeping them as your fans.

You’ve been told this piece of advice a million times before, and you might say it’s getting a little bit old; but has everyone actually tried following it? No, they haven’t. So, one more time for old times sake: follow your passion.

10. Be A Great Performer

We know Chris Rock is a great performer; we can see that from the energy and level of effort he brings to stand up, as well as his movies. And with any entertainment career, being a great performer is a crucial part of determining your success.

How much is Chris Rock worth?

Chris Rock’s net worth is estimated to be $60 Million.

How old is Chris Rock?

How tall is Chris Rock?

Chris Rock is one of the richest comedians in the world, and he’s done well to build an impressive career in comedy.

What do you think about Chris Rock’s net worth? Leave a comment below.