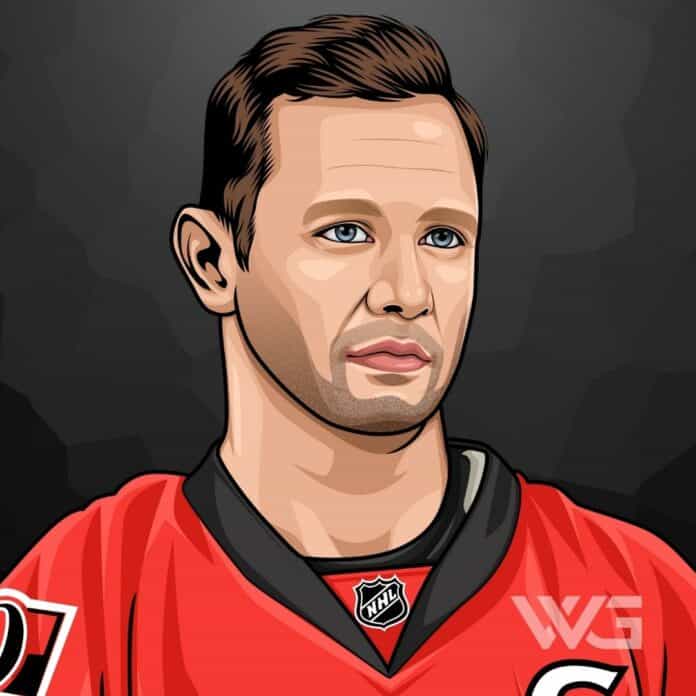 What is Jason Spezza’s net worth?

Jason Spezza is a Canadian professional ice hockey player known for his performances with the Ottawa Senators, the Dallas Stars, and the Toronto Maple Leafs.

He’s played ice hockey for 19 seasons with the National Hockey League and represented his country on the international stage.

As of November 2022, Jason Spezza’s net worth is estimated to be $43 Million.

He was raised with his twin siblings, Michelle and Matthew, playing ice hockey from a young age and enjoying work as a child model.

Inspired by Mario Lemieux, Spezza began playing as a junior for the Toronto Marlboros in 1997 before playing in the Ontario Hockey League with the Brampton Battalion in 1998.

In 2001, Jason Spezza was picked in the NHL Draft over Alexei Yashin, playing his first full season with the Ottawa Senators in 2003 and scoring 22 goals.

Playing alongside Dany Heatley and Daniel Alfredsson, Spezza enjoyed many victories with the Senators despite undergoing back surgery in 2006.

In 2014, he was traded to the Dallas Stars, after playing most of his professional ice hockey career up to that point with the Ottawa Senators.

Here, Spezza continued to score a high number of goals before moving once again to the Toronto Maple Leafs in 2019, where he remained until 2022.

He also participated in the 2012 Spengler Cup in Davos, Switzerland, and the 2015 World Championships, winning the gold medal.

Over the course of his professional ice hockey career, Jason Spezza has taken home a high salary from one year to the next.

While playing for the Ottawa Senators and Dallas Stars, his annual salary has often exceeded $5 million.

With his high income and brand endorsements, Jason Spezza’s place among the richest hockey players in the world is secure.

His net worth has seen several notable boosts during his career, for example, with the signing of his $49 million contract with the Ottawa Senators in 2007.

He continues to draw an impressive salary and money from sponsorships, so we can anticipate more net worth growth in the future.

Jason Spezza married his girlfriend, Jennifer Snell, in 2009, with many of his ice hockey teammates attending the wedding ceremony.

Spezza and Jennifer have four daughters together and resided in Ottawa before selling the property following his trade to the Dallas Stars.

While he no longer posts to his old social media pages, his official NHL page includes all the facts and statistics about his career that fans need to know.

While Jason Spezza’s career isn’t as impressive as iconic players such as Wayne Gretzky, he’s nevertheless racked up an impressive list of achievements.

His list of awards includes victories with his teams and individual accolades for his impressive performances and contributions to the sport.

Here are some notable awards and accolades from Jason Spezza’s career:

Spezza continues to play ice hockey, so there’s still potential for more awards and honors as his career progresses.

How Does Jason Spezza Spend His Money?

Jason Spezza’s status as one of his generation’s best ice hockey players has allowed him to accumulate an impressive fortune over the years.

While he hasn’t purchased one of the most expensive houses in the world, his real estate portfolio is nevertheless impressive.

His residence in Ottawa went on the marketing following his departure from the Ottawa Senators, with an asking price of $1.7 million.

Jason Spezza’s career began back in the 1990s, continuing through to the early 2020s, with many high points of note.

In addition to his championship victories, he’s worked in philanthropy and helped raise money for noteworthy charities.

Here are some of the best highlights of Jason Spezza’s career:

Spezza’s legacy to the professional ice hockey world is well and truly secure, with many high points he can be proud of.

As he continues to work on community programs and other business ventures, we can expect to see more success in the future.

Jason Spezza has been happy to discuss his experiences as a professional ice hockey player with the media in many interviews.

These insights range from how he views his role within the team to dealing with successes and failures in the ice rink.

Here are our favorite quotes from Jason Spezza:

Now that you know all about Jason Spezza’s net worth, we’ll explore some of the ways his career can help us achieve our own goals.

He’s won many victories throughout his career, displaying a commendable work ethic in the process.

Here are some of the best success lessons to learn from Jason Spezza:

1. Learn From The Past

Jason Spezza has discussed the importance of learning from the past in interviews about his professional experiences.

Understanding what opportunities you’ve missed – and why – helps ensure you’re better equipped to seize them in the future.

2. Play To Your Strengths

While developing your weaknesses is something everyone should do, as working on improving weaknesses has the capacity to turn them into strengths.

At the same time, don’t forget to play to your strengths since this is where your main advantages lie.

Jason Spezza once helped turn a game around and lead the Toronto Maple Leafs to victory by delivering a rousing speech during the intermission.

Speak up with confidence, and people will respect your opinions.

So there you have it, our complete guide to the personal life, professional career, and net worth of Canadian professional ice hockey player Jason Spezza.

His impressive career, mostly playing with the Ottawa Senators, has allowed him to build up a great deal of wealth through salaries and brand sponsorships.

While he is retired from professional hockey, his entrepreneurial activities and other ventures mean his net worth is likely to grow, so check back on this article again for the details.

As of November 2022, Jason Spezza’s net worth is estimated to be $43 Million.

What do you think about Jason Spezza’s net worth? Leave a comment below.