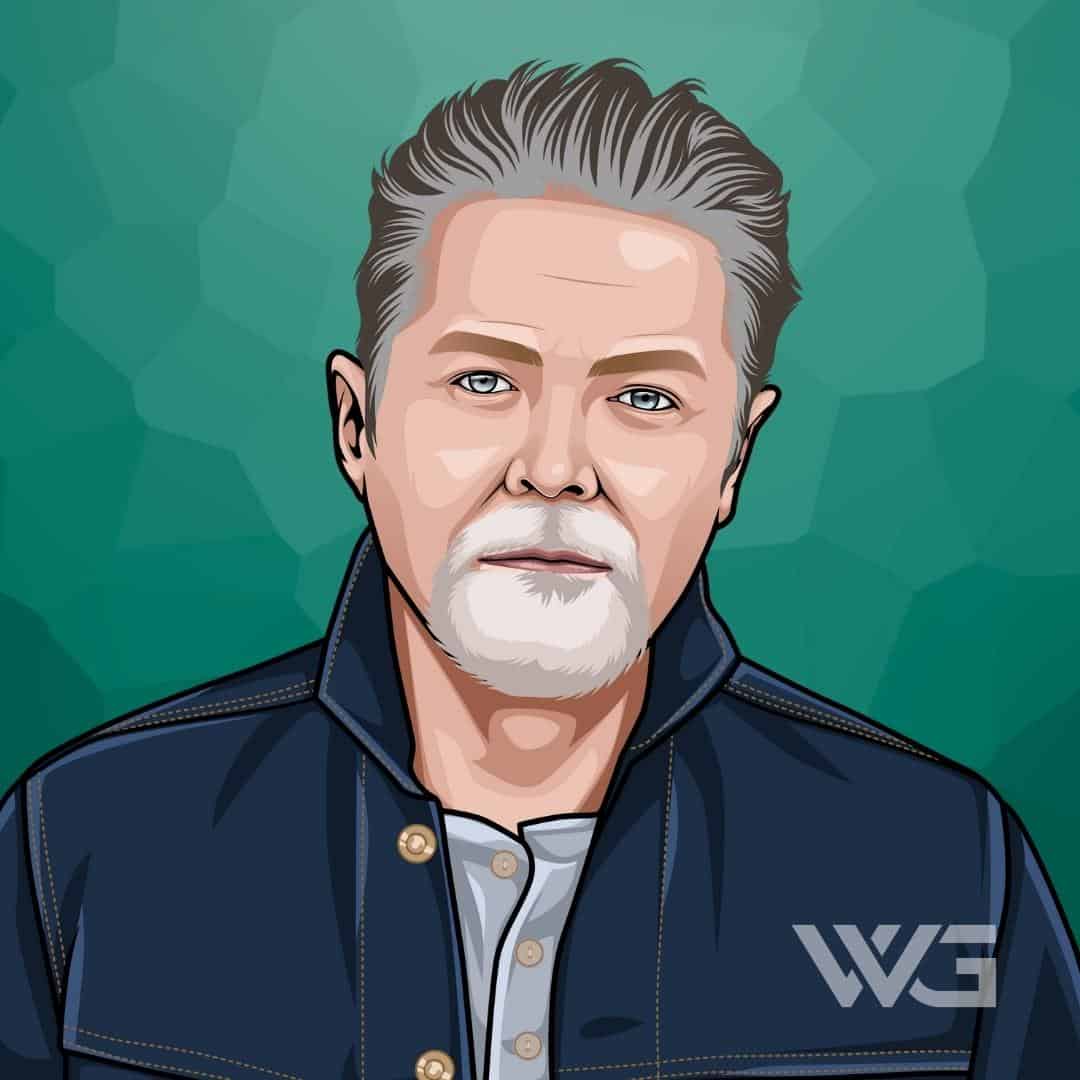 What is Don Henley’s net worth?

Don Henley is one of the fabulously wealthy founding members of the Eagles. He is a talented, self-taught drummer, songwriter, and singer.

His influence on the rock genre, through his contribution to making the Eagles an award-winning band, is widely accepted.

He made his mark in the music industry with songs and lyrics that are now classics in their own right. The Eagles and Don created legendary songs, such as the award-winning “Hotel California”.

His father was a farmer, which helped make Don appreciate nature enormously. His father also owned an auto parts store, while his mother was a teacher. During his school years, Don attended Linden-Kildare High School and loved football.

Unfortunately, the coach of his football team suggested that Don quit the team due to his small build. His mother introduced him to music, arranging piano lessons from a young age. However, he didn’t take a liking to music and soon stopped practicing.

Don was only to discover music later in his childhood when he joined the school’s marching band. The drums captured his imagination and he became hooked, thoroughly enjoying his time with them.

As many children do, Don formed a small band with his friends, calling it the Four Speeds. After people took an interest and they established a following, they decided to change the name of the band to Shiloh.

After school, Don decided that he would put his music career on hold so that he could attend college.

After a year at Stephen F. Austin University, he transferred to North Texas State University where he majored in English Literature. Unfortunately, due to Don’s father suffering from heart disease, he left college to assist him and started performing with Shiloh again, during his free time.

Once Don re-joined the band, guitarist, Kenny Rodgers, encouraged the band to try and hit the big leagues by heading to Los Angeles.

In one of those moments when fate intervenes, Don met guitarist, Glenn Frey, through his contacts at Amos.

Glenn Frey had recently released an album through Amos and was scheduled to go on tour with his band. After hearing Don play, the two met up and Glen asked him to join them on tour.

Don agreed and was soon to hit it off with the other band members, guitarist Bernie Leadon and bassist, Randy Leadon.

This was the start of what was to become the most popular and award-winning band, The Eagles.

The Eagles signed a deal with David Geffen from Asylum Records and went on to record a slew of major hits, such as Best of My Love, One of These Nights, Take it to the Limit, and Lyin’ Eyes, becoming major hits as they reached the top of the Billboard Charts.

These songs were compiled into one of the best-selling albums of all time, the 1976 album, Their Greatest Hits.

Their fifth album, Hotel California, succeeded beyond their wildest dreams, selling over 42 million copies worldwide and replacing Michael Jackson’s, Thriller,  as the highest-selling album of all time.

Don took his work solo in 1982 and started appearing with other top celebrities. He recorded an album alongside Greg Ladanyi and Danny Kortchmar called I Can’t Stand Still.

It was one of the songs on the album that received a Gold Certificate, reaching number three on the Billboard Charts.

Don is recognized as one of the greatest singing drummers of all time. Don continued to play solo gigs as well as with the Eagles, up until Frey died in 2016. The death of Frey marked the end of this legendary band.

However, Don’s official website lists tour dates and events where you can still hear him play all the old classics and some new songs too.

It is estimated that Don Henley earns a salary of around $75 million per year. This makes him one of the world’s highest-paid singers in 2022.

He is the fourth-wealthiest drummer in the world and far out-earns the other members of the band.

Top rock musicians earn royalties on their songs as well as receive massive amounts for each gig while on tour. Don Henley, being a songwriter as well, receives additional fees for the songs he creates together with endorsement income.

Here’s a breakdown of Don Henley’s annual net worth:

It was Don’s relationships that inspired a large part of his music. He dated Loree Rodkin in 1974 and, after their breakup, was inspired to write the song, Wasted Time. He also created parts for the song, Hotel California.

Later, Don started dating a member of Fleetwood Mac. He dated the singer Stevie Nicks, but unfortunately, their relationship foundered, coming to an end after only 2 years.

In 1995, Don married Sharon Summerall and the couple went on to have three children together. In a truly tragic fashion, the song “Everything is Different Now” was dedicated to his wife after finding out about her multiple sclerosis diagnosis. Don and his family currently live in Dallas, Texas.

It comes as no surprise that Don has been rewarded for his talent and dedication to music over the years.

He has consistently turned out chart-topping music for decades and continues to produce amazing songs despite his age.

Here are some highlights from Don Henley’s career:

How Does Don Henley Spend His Money?

Don didn’t blow his money like some rock stars but rather invested it in real estate.

His home in West Hollywood was purchased for $2.2 million after a bidding war over the 1800-square-foot Spanish-styled property. And like most rock stars, he did go through a stage of owning some of the most expensive cars in the world, but he’s more than happy to drive more ordinary cars.

Unfortunately, on the negative side, Don also found himself paying off fines after being arrested for contributing to the delinquency of a minor.

Don is a philanthropist with major involvement in a variety of charity organizations. He founded the “Recording Artists Coalition” as well as the “Walden Woods Project”.

His charity work does not stop there, as he is a member of the “CuriosityStream Advisory Board” and a supporter of the “Blues Foundation.

With a performance and recording career spanning 5 decades, Don Henley is a true legend in the music industry. His songs have grossed some of the highest earnings in music history and the band’s performances are legendary.

Here are some of the best highlights of Don Henley’s career:

With Don’s down-to-earth upbringing, it is no wonder that his music strikes a chord with his many fans of all ages. His thoughtful lyrics and memorable melodies ensure that his songs will live on for generations.

Here are our favorite quotes from Don Henley:

With age comes wisdom and Don Henley is happy to pass on what he has learned over the years in the cut-throat music industry. He champions the rights of his fellow musicians, helping them navigate the legalese that steals the proceeds of many singers’ and songwriters’ royalties.

Now that you know all about Don Henley’s net worth, here are some of the best success lessons to learn from Don Henley:

1. Appreciate what you have.

Don grew up on a farm, realizing at an early age that hard work and effort can only get you so far. He learned to appreciate what he had and how easily it can be taken away from him.

2. Focus on yourself and those whom you love.

It is easy for popular musicians to lose sight of the most important people in their lives. With all the adoration and fame, it can be difficult to retain who you are. Don has tried all his life to be authentic to his family and himself.

3. Take time to find where your passions lie.

While life can push you in a variety of directions, Don feels that it is important to take the time to find who you are and what you are passionate about. Once you identify your passion, then you can go about deciding what you’re going to do about it.

After creating music with the Eagles for 37 years, Don has become a legend in the music industry. His albums released with the band continue to sell worldwide. It is beyond doubt that the Eagles and Don Henley have become a part of music history.

Don Henley turned 75 this year and is no longer as involved in music as he used to be. But even without new releases, Don Henley continues to be known as one of the most successful artists of all time.

What do you think about Don Henley’s net worth? Leave a comment below.