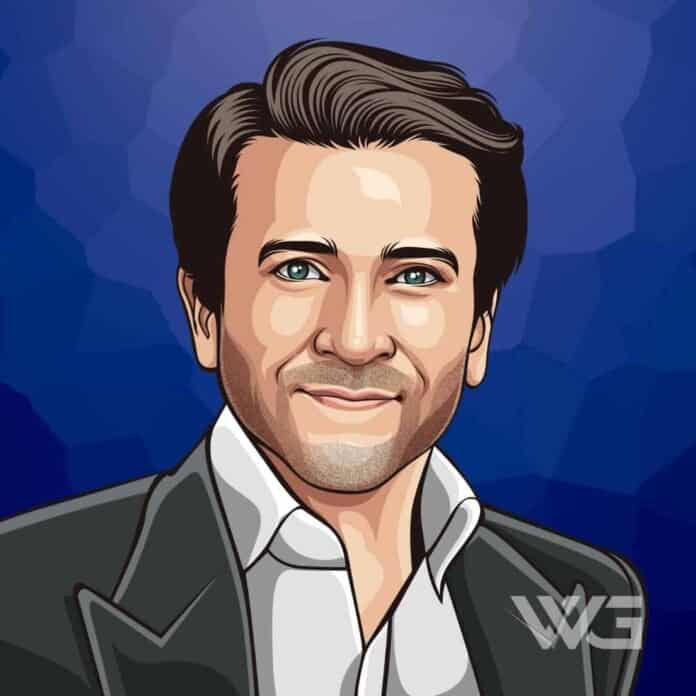 What is Robert Herjavec’s net worth?

As of December 2022, Robert Herjavec’s net worth is estimated to be roughly $200 Million, making him a highly wealthy investor and businessman.

Herjavec is the founder of BRAK System, which is a Canadian integrator of Internet security software. He later sold the company to AT&T Canada for $30.2 million dollars.

Robert Herjavec was born in SR Croatia on the 14th of September, 1962.

He moved to Canada at the age of 8, and his father used to walk to work to save money on the bus fare. Herjavec grew up under hard conditions and a low budget of money.

Herjavec graduated from New College at the University of Toronto with a degree in English literature.

To make a living and help support his family, he took on a variety of minimum wage of jobs; such as delivering newspapers, waiting tables, collection agent, and retail salesman.

Herjavec’s first job was related to films where he operated behind the camera in several production roles.

He worked as one of the assistant directors in many productions such as ‘The Return of Billy Jack’ which was filmed in 1985-86. Herjavec’s early film career concluded with the position of Field Producer of the ‘XIV Winter Olympic Games’ for Global TV.

Herjavec later learned of an opening at a computer startup named ‘Logquest’ which used to sell IBM mainframe emulation boards. Herjavec was under qualified for the position and managed to secure a job for himself by offering to collaborate for free for the first six months.

In 1990, Herjavec left the company to start his own company which he managed to establish under the name of ‘BRAK Systems’. Soon the company became Canada’s top provider of Internet Security Software. In 2000 the company was brought by ‘AT&T’ for $100 million.

Herjavec is also a leading television personality in ‘Dragons’ Den’ and ‘Shark Tank’, alongside entrepreneurs such as Daymond John, Barbara Corcoran, Lori Greiner and Mark Cuban.

He is also the author of two best-selling titles, ‘Driven: How to Succeed in Business and Life’ (2010) and ‘The Will to Win: Leading, Competing, Succeeding’ (2013).

Herjavec is very passionate about car racing and also loves golf. Herjavec competed in the well known Ferrari Challenge and has competed in the 2010 Miami marathon and the 2011 New York marathon. He is also a certified SCUBA diver and a motorcycle enthusiast.

Here are some of the best highlights from Robert Herjavec’s career:

“To succeed in business you have to do three things; work your butt off, be extravagant with your dreams but practical with your expenses, and avoid thinking about failure.” – Robert Herjavec

“Cash is the lifeblood of your business. There are very few things in business that will kill you, but running out of cash is one of those things. You can recover from almost any other mistake, but if you run out of cash you’re dead.” – Robert Herjavec

“I’m intrigued that the same letters from the alphabet are used in the word silent and in the word listen. Perhaps it’s evidence that the most important part of listening involves remaining silent.”  – Robert Herjavec

“Of all the people I have met who have achieved a level of economic success similar to m own were driven to realize a dream, but not necessarily to become wealthy. Remember, success is doing what you want to do.” – Robert Herjavec

Now that you know all about Robert Herjavec’s net worth, and how he achieved success; let’s take a look at some of the lessons we can learn from him:

1. Believe in the business and yourself

There are many people who wanna see you fall. You have to believe in your idea and yourself, almost at the point of being delusional. Also, remember that everyone has advice but no one knows what you have to go through to start and grow.

An Entrepreneur risks a lot to start a business. The entrepreneur quits her job, takes a second mortgage on the house, and dives in head first. Keep your jobs until the business is at the point that you can safely quit it.

Know your numbers, it’s like a jigsaw puzzle. Many of the businesses on the show were closely monitoring their revenues but didn’t know how to keep track of profits.

How much is Robert Herjavec worth?

Robert Herjavec’s net worth is estimated to be $200 Million.

How old is Robert Herjavec?

How tall is Robert Herjavec?

Robert Herjavec stars among other entrepreneurs such as Lori Greiner and Kevin O’Leary in the TV show ‘Shark Tank’. Herjavec an incredibly successful investor and businessman that has worked with some of the best businessmen in the industry.

As of December 2022, Robert Herjavec’s net worth is estimated to be $200 Million dollars.

What do you think about Robert Herjavec’s net worth? Leave a comment below.

What is Daniel Radcliffe's net worth? Introduction  As of ,...