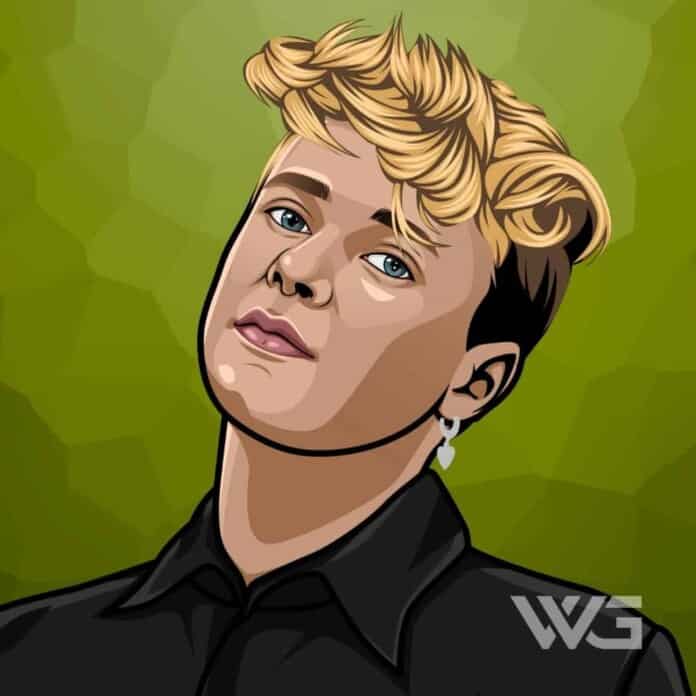 What is Gavin Magnus’ net worth?

Gavin Magnus is an American actor, singer, and YouTuber.

Magnus owns a self-titled channel where he does videos, dares, vlogs, and funny pranks. He serves as the host of DreamworksTV, which is another YouTube channel that offers hilarious jokes, magic videos, life hacks, and gaming content. Magnus has contributed to several projects on Cartoon Network and Nickelodeon.

He is a multitalented personality, and he has gained a lot of fans all over the world. Magnus also likes gymnastics, surfing, snowboarding, skateboarding, and extreme biking.

Gavin Magnus was born on the 26th of March, in 2007. His mother is frequently featured in his YouTube videos and Instagram posts. He has two elder brothers. His grandmother also features on his channel, and she has appeared in a video titled ‘Grandma Reacts to My Funniest Texts ‘Crush says I Love You, Baby.’

Magnus and Piper Rockelle often work on each other’s channels to create amazing videos. On the 15th of March, 2019, he posted a photo on his Instagram with Rockelle with the caption ‘Pavin’.

As a singer, Magnus performed in the ‘Boys of Summer Tour’ in 2018 across the United States. He released two singles titled ‘Crushin’ and ‘Hollaback’.

In 2016, Magnus started out his YouTube career with his debut video ‘SMG: Mario’s Kindness Problem’. He then went on to post other plush toy and puppet videos. He also began sharing random vlogs featuring his mother.

Magnus began collaborating with his girlfriend, Piper Rockelle, for creating challenging tags, pranks, and general couple vlogs in 2019. The same year, he shared ‘Crushin ft. Piper Rockelle’. The music video garnered millions of views within a week of its release and has accumulated over 29 million views.

He serves as the host of a YouTube channel called ‘DreamworksTV’. The channel is dedicated to videos on laugh-out-loud jokes, life hacks, music, gaming, magic, and more. In 2018, he became a part of Rock, Your Hair squad. As an actor, he has been featured on many series on Nickelodeon and Cartoon Network.

How Does Gavin Magnus Spend His Money?

Magnus owns an incredible home in Hollywood Hills, which was purchased for $2.5 million. The home has a beautiful view over Hollywood.

Here are some of the best highlights of Gavin Magnus’ career:

“Well, Minor Renovations got picked up last year. I played a kid designer. It was so much fun. It’s actually playing in France now. With DreamWorks TV I did 12 episodes of When Sports Collide with my friend Delilah, and we had so much fun on set! The series is now ended, but I’m looking forward to my next venture.” – Gavin Magnus

“I’m a creator, so when I’m not on set, I am filming my own videos on YouTube with my good friend Piper Rockelle. When we aren’t filming, we are at the mall shopping or just goofing off being kids.” – Gavin Magnus

“It’s all about heartbreak. You’re in love with this girl, but you’ll never have a chance with her. I’ve done covers before, but I really like doing originals. You’re not telling someone else’s story—you’re telling your own. It’s a chance to open up to your listeners and connect on a more personal level.” – Gavin Magnus

“It can be stressful at times, but it’s also fun. I’m very open with my supporters, and I put my whole life out there on social media, no matter what situations I’m going through. There are thousands of people who have my back and are always there for me. I’m kind of like, Wow, it’s a good feeling to have.” – Gavin Magnus

“I don’t really get how someone can get offended by hate comments. The hater doesn’t even have the confidence to say something to your face. They’re just hiding behind a screen. I don’t take it personally. I’m so grateful to you. And I love every single one of you. And look out for my EP coming soon with *tons* of new tracks!” – Gavin Magnus

Now that you know all about Gavin Magnus’ net worth and how he achieved success; let’s take a look at some of the lessons we can learn from him:

At any given moment, you have the power to say: this is not how the story is going to end.

How much is Gavin Magnus worth?

Gavin Magnus’ net worth is estimated to be $1.5 Million.

How old is Gavin Magnus?

How tall is Gavin Magnus?

Gavin Magnus is an American social media personality, actor, and artist. Magnus is best known for being a successful YouTube star. He is popular on Youtube, Instagram, and TikTok. He has starred as “Gavin” on the television series ‘Magnutizers’ in 2016. Magnus wrote and directed the series.

From 2018 to 2019, Magnus appeared on the TV series ‘Jam Jr.’ He starred on the Dreamworks TV series ‘When Sports Collide’ and appeared as “Byron” in the movie ‘Timecrafters.’

What do you think about Gavin Magnus’ net worth? Leave a comment below.

What is April Ross' net worth? Introduction  As of ,...