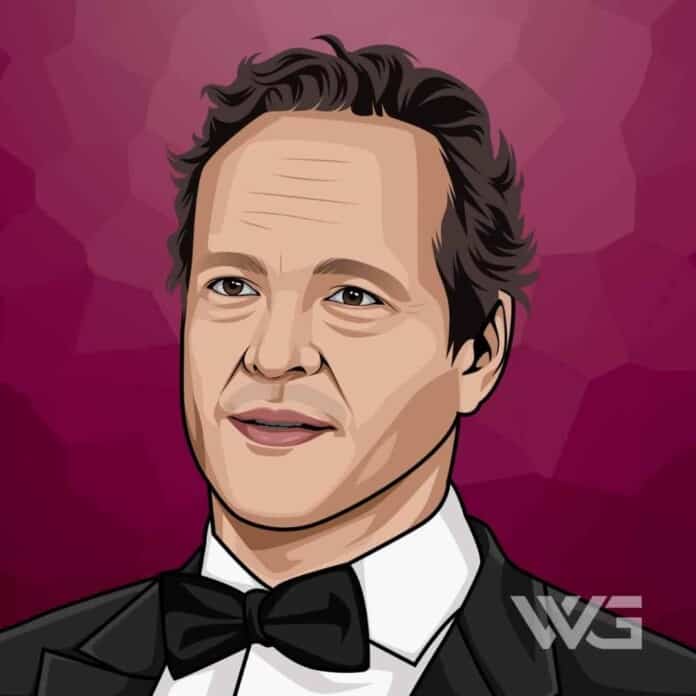 What is Vince Vaughn’s net worth?

As of November 2022, Vince Vaughn’s net worth is approximately $70 Million.

Vincent “Vince” Vaughn is an American actor, producer, screenwriter, and comedian from Minneapolis. He has appeared in a number of films in the 1990s, including ‘Rudy’, ‘The Lost World: Jurassic Park’ and ‘Return to Paradise’.

Vincent Anthony Vaughn was born on the 28th of March, 1970, in Minneapolis. He is the son of Sharon Eileen and Vernon Vaughn.

Vaughn graduated from Lake Forest High school in 1988. He used to play several sports like football, baseball, and wrestling. He was interested in theater from a young age and decided to become an actor even before completing high school.

Vaughn got an opportunity to appear in a television commercial for Chevrolet in 1988. Inspired by this incident he packed off and left for Hollywood to become an actor. He began his acting career in television in 1989 by appearing in episodes of the series ‘China Beach’ and ’21 Jump Street’.

Vaughn met Jon Favreau on the sets of the film and the two became good friends. He appeared alongside with Favreau in the 1996 comedy-drama film ‘Swingers’ in which he played a struggling actor, Trent.

The famous director Steven Spielberg was impressed by Vince’s performance in ‘Swingers’ and cast him in the movie ‘The Lost World: Jurassic Park’ in 1997. His role as Nick Van Owen got him widespread exposure.

In 2001, he co-produced and starred in the comedy ‘Made’ which was written and directed by his friend Jon Favreau.

He starred along with Luke Wilson and Will Ferrell in the 2003 comedy film ‘Old School’. The film was a big commercial success and gave a boost to his faltering career.

He was cast opposite Jennifer Aniston in the 2006 romantic comedy-drama ‘The Break-Up’ which went on to become a big commercial success in spite of getting negative reviews.

Vaughn produced or co-produced a lot of movies during the later part of the decade, the major ones being ‘Fred Claus’, ‘Four Christmases’ and ‘Couples Retreat’.

Here are some of the best highlights of Vince Vaughn’s career:

“As an actor you bring some of your own experiences which can make things easier. You build off of it, but your imagination is always the best thing you have as far as creating things I think specifically for what that character is going through. But you’re definitely drawing obviously upon things that you can connect to, and then you kind of mold the change that you’re making into something that’s right for the character.” – Vince Vaughn

“You realize how much the relationship when kids are young can suffer. And it’s important to make sure that you are able to spend some time with each other. As a father, the best thing you can do for the kid is to love the mom. Even as a parent, I believe that loving the mother is the most important thing.” – Vince Vaughn

“As an actor, the best thing you have is your imagination. You’re not going to have all the experiences, but you draw on the things that you know. So I think you definitely use the things that you’re familiar with to your advantage.” – Vince Vaughn

“It’s nice when people are passionate about something, and it’s always better when they let the subject tell the story, more so then when you can tell people are trying to get their own philosophy into it.” – Vince Vaughn

“I was filming a movie in London, and I drove through Ireland. It was quite beautiful, and the countryside was really remarkable. The contrast between the countryside and Ireland, and the murals there, with Northern Ireland, still being a part of the United Kingdom, there’s just a stark contrast in those two things.” – Vince Vaughn

Now that you know all about Vince Vaughn’s net worth, and how he achieved success; let’s take a look at some of the lessons we can learn from him:

Our failures help us course-correct our way to success. The most successful people in the world fail fast and fail often. Why? Because every failure is a lesson learned.

2. Feel the Fear and Do It Anyway

There’s no such thing as being fearless. There is only courage, which is the ability to take action in spite of fear–to feel the fear and do it anyway.

It’s impossible to feel grateful and feels stressed simultaneously. If you ever feel stressed about something, STOP: think about 3 things you’re grateful for.

How much is Vince Vaughn worth?

Vince Vaughn’s net worth is estimated to be $70 Million.

How old is Vince Vaughn?

How tall is Vince Vaughn?

Vince Vaughn is an actor who could have easily been typecast as an action hero had it not been for his consistent efforts to try out different roles.

The versatile actor is as talented as he is good looking and has effortlessly played romantic leads, action hero and mentally deranged psychopaths with the same elan.

What do you think about Vince Vaughn’s net worth? Leave a comment below.