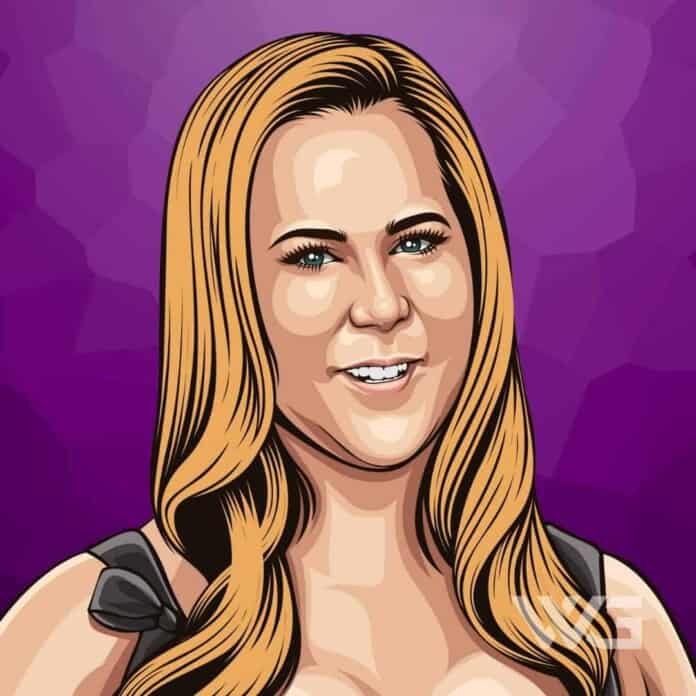 What is Amy Schumer’s net worth?

As of December 2022, Amy Schumer’s net worth is estimated to be roughly $45 Million.

Amy Beth Schumer is an American stand-up comedian and actress.

Schumer ventured into comedy in the early 2000s before appearing as a contestant on the fifth season of the NBC reality competition series Last Comic Standing in 2007.

Schumer is also known for being an incredible actress, she’s been in movies such as ‘Snatched’ and ‘I Feel Pretty’.

Schumer’s father is a first cousin of US Senator Chuck Schumer and was born into a Ukrainian Jewish family. She was also raised according to Jewish beliefs.

Schumer grew up in a wealthy household in her early childhood, but when she was 9 years old, her father’s company became bankrupt. Things turned worse, and her parents divorced.

Amy Schumer began her career in 2004 when she did her first stand-up comedy at the New York-based comedy club ‘Gotham Comedy Club’.

In 2011, she appeared as a co-host of the talk show ‘A Different Spin with Mark Hoppus’. The same year she also appeared in one episode of the weekly podcast and radio show ‘WTF with Marc Maron’.

Her first role in movies came in the American romantic comedy ‘Trainwreck’ where she played ‘Amy Townsend’. The film premiered on March 15, 2015, at the ‘South by Southwest Film Festival’ and released theatrically in the US on July 17 that year.

In 2016, Schumer published her hilarious autobiographical book, ‘The Girl with the Lower Back Tattoo’. Her book peaked ‘The New York Times Best Seller’ list for a few weeks in 2016. The audiobook of the memoir read by her won her a ‘Grammy Award’ nomination for the ‘Best Spoken Word Album,’ in 2017.

Here are some of the best highlights of Amy Schumer’s career:

“I’m super grateful that there weren’t social media when I was a kid, but that sort of self-doubt crept in at a young age. It’s bullying. It’s the comments here and there, and maybe somebody says something to you that they don’t even mean to be a mean-spirited comment, but they’ll just kind of say it to you in passing.” – Amy Schumer

“I think standup is pretty good for an introvert because you are performing, but, I mean, it’s on your own terms. There are so many people in the room, but it’s a one-sided conversation. And you actually don’t have to interact – unless you want to.” – Amy Schumer

“What’s good about not being a model is that it’s not the thing I trade on. Once I start looking older, that won’t affect me. I have never gotten anything done because I’m, like, so gorgeous. I’m good-looking enough that I can work in the business.” – Amy Schumer

“I have a healthy relationship with food. My problem is, as a comic, I eat dinner late. But I’ll have a smoothie for breakfast every morning, and I keep it pretty low-carb and healthy during the day. At night, I’ll have a basic protein, quinoa, and vegetables.” – Amy Schumer

Now that you know all about Amy Schumer’s net worth, and how she achieved success; let’s take a look at some of the best lessons we can learn from her:

Be grateful for everything, even though life is what it is.

2. Make time to figure out your personality type — and then tailor your schedule to fit your needs

Schumer says that when she figured out she was an introvert, it was basically like her entire life made more sense. Introverts feel drained of energy when they are with other people for too long — so once Schumer figured out she was one, she made sure to fit solo time into her schedule.

And that applies to practically all jobs, not just comedy: In order to get where you’re going, you’ve gotta work at it all along the way.

How much is Amy Schumer worth?

Amy Schumer’s net worth is estimated to be $45 Million.

How old is Amy Schumer?

How tall is Amy Schumer?

Amy Schumer is an award-winning American stand-up comedian and actress who has made her mark in both films and theater.

She earned her fame with the American sketch-comedy TV series ‘Inside Amy Schumer’ which was created and hosted by her.

As of December 2022, Amy Schumer’s net worth is approximately $45 Million.

What do you think about Amy Schumer’s net worth? Leave a comment below.