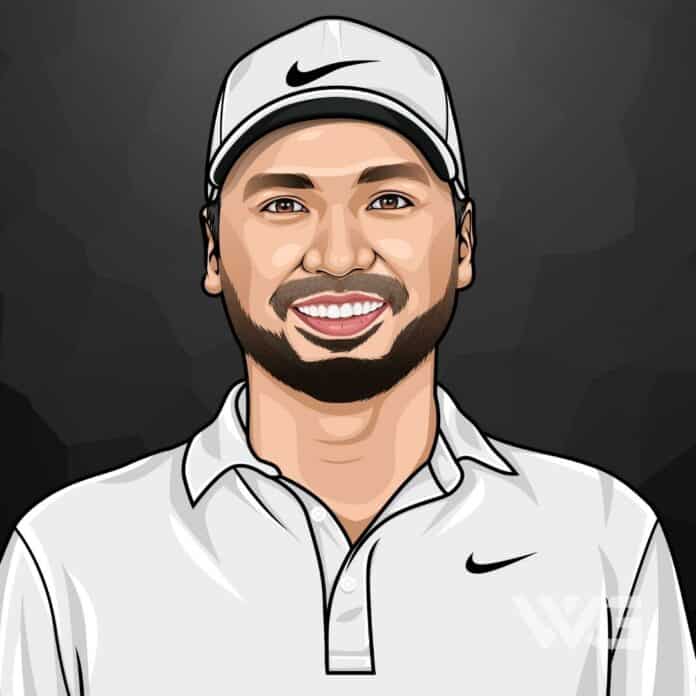 What is Jason Day’s net worth?

Jason Day is an Australian professional golfer who has won many international championships throughout his career.

Raised with his siblings Yanna and Kim, he began playing golf from an early age, with his father limiting him to six holes a day as a junior.

Jason Day’s professional career began in 2006, when he began playing in PGA Tour events and the Nationwide Tour of 2007.

By 2010, Day was contending in the majors, beginning with the Open Championship, where he replaced Greg Norman after he dropped out of the contest.

In 2013, he participated in the U.S. Open, finishing in second place in a tie with Phil Mickelson, two strokes behind Justin Rose.

At the RBC Canadian Open, he defeated Bubba Watson and David Hearn to win the championship, further consolidating his reputation.

His wealth was augmented by sponsorships, including for the makers of some of the most expensive watches in the world, Rolex, in addition to sporting goods manufacturers.

Jason Day’s career earnings have continued to climb since he first turned professional in 2006 and rose through the rankings.

In his best years, he has taken home a salary of several million dollars, with prize money combined with sponsorship deals.

His status as one of the richest golfers in the world looks secure for the foreseeable future, with more tournaments in the pipeline.

Jason Day’s net worth growth has been consistent over the years, with each championship victory rising over previous years.

Each tournament win nets the star golfer large sums of money, with prize money in excess of $150,000 a common occurrence in his career.

With an estimated $3 million income each year, his net worth will no doubt continue to climb in the future.

In 2009, Jason Day married Ellie Harvey, with whom he has four children, Dash, Lucy, Arrow, and Oz Nilo.

His wife Ellie was injured by LeBron James in 2015 when the basketball player struck her while attempting to retrieve a ball.

He keeps his 500,000+ followers in the loop through his official Instagram account, posting updates on his upcoming tournaments and other events.

As a one-time world number-one ranked professional golfer, Jason Day has an impressive list of accolades and achievements.

With a total of 17 professional wins to his credit, he’s deservedly recognized as one of the greatest golfers of all time.

Here are some examples of the awards and achievements from Jason Day’s career:

With many more awards and championship titles to his name, this brief list represents the tip of the iceberg of his overall accomplishments.

His continued involvement in PGA Tour contests and other events means this list will likely grow as his career develops.

How Does Jason Day Spend His Money?

Jason Day’s net worth means he can afford to live a luxurious lifestyle, with real estate to match his wealth.

His home in Ohio is on par with some of the most expensive houses in the world, surrounded by woodlands and overlooking a waterfront.

It even features its own small golf course where Day can practice without having to spend time away from his family.

With his hugely successful career earnings and multiple tournament victories, Jason Day has enjoyed many high points over the years.

This span from his time as an amateur golfer through to his major championship wins and lucrative brand endorsement deals.

Here are some of the best highlights of Jason Day’s career:

It’s an exemplary record of accomplishments that few modern professional golfers have matched.

As his career isn’t over yet, we can expect many more high points and successes in the years to come.

Throughout his impressive career, Jason Day has often shared his thoughts on golf with the media.

This ranges from how he prepares for an important tournament to the importance of rest and recuperation.

Here are our favorite quotes from Jason Day:

Now that you know all about Jason Day’s net worth, it’s time to take a look at some of the ways his life can inspire us to become better people.

His record-breaking career as a professional golfer and work ethic is a valuable lesson in hard work and dedication.

Here are some of the best success lessons to learn from Jason Day:

Whatever your dreams and passions are in life, you should always commit to working towards accomplishing them.

This principle is what guided Jason Day to become one of the best golfers of all time, with a net worth to prove it.

2. Start The Day As Early As Possible

As the old saying goes, “the early bird catches the worm,” and those who get up early in the morning have a head start over the competition.

Day’s advice to aspiring golfers is to start the day as early as possible and get a few rounds of golf in before anything else.

Small goals are easier to achieve, but only big goals will push you to the limits and give you big results.

Set large, audacious goals to take your success to the next level.

That concludes this article exploring the life, professional career, and net worth of Australian golfer Jason Day.

His impressive track record looks set to continue in the future as his career progresses, so we can expect his net worth to grow.

To ensure this article covers the most up-to-date information, we’ll be updating it in the future, so be sure to check back for the details.

What do you think about Jason Day’s net worth? Leave a comment below.