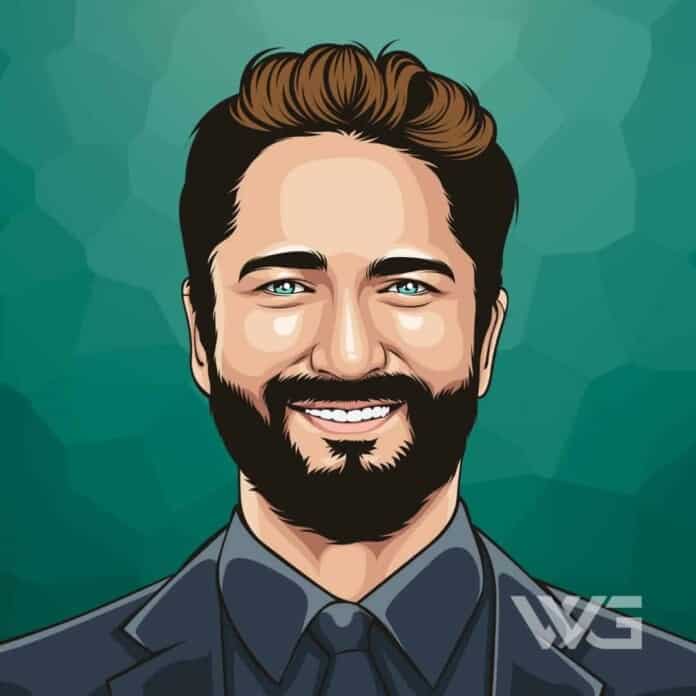 What is Gerard Butler’s net worth?

As of November 2022, Gerard Butler’s net worth is estimated to be roughly $40 Million.

Gerard James Butler is a Scottish actor, producer, singer, and musician from Paisley, Scotland. Butler is best known for the films ‘Tomorrow Never Dies’, ‘Tale of the Mummy’, ‘Dracula 2000’, ‘300’, and ‘Hunter Killer’.

Gerard James Butler was born on the 13th of November, 1969, in Paisley, Scotland. He was raised in a very conservative and strict Roman Catholic family.

Meanwhile, he enrolled himself at the Scottish Youth Theatre during his teen years.

Butler made his first appearance in the Steven Berkoff play named, ‘Coriolanus’. In 1997, he starred in the Academy nominated Golden Globe-winning British drama film ‘Mrs. Brown.

In 2003, Butler made an appearance in the action film, ‘Lara Croft Tomb Raider: The Cradle of Life’. The following year, he played the role of ‘The Phantom’ in the Academy Award-nominated film, ‘The Phantom of the Opera’.

His breakthrough came in 2007 when he gained fame and popularity for his acting in the film, ‘300’, which was directed by Zack Snyder. The film was based on a comic series of the same name. The film served as the breakthrough for his career and the turning point of his life.

In 2010, he starred opposite Jennifer Aniston in the romantic action comedy film, ‘The Bounty Hunter’, which was directed by Andy Tennant. The film was not well received by critics.

In 2012, he starred in the biographical film, ‘Chasing Mavericks’, which was based on the life of surfer Jay Moriarity. The film was not well received and negatively reviewed by critics.

Here are some of the best highlights of Gerard Butler’s career:

“When I’m making a movie, it’s making use of my creative juices, and it fills me up with what really is – I think my purpose here is to tell stories.” – Gerard Butler

“I sang in a rock band when I was training as a lawyer. You know, not professional, we just did it for fun. We just did gigs all over Edinburgh and some in Glasgow and some at festivals.” – Gerard Butler

“I was training to be a lawyer… I was president of the law society at Glasgow University, and my bass guitarist was the secretary of my law society; the lead guitarist and writer worked at the law firm that I worked.” – Gerard Butler

“I know I have within myself… a side of solitude. I think people who know me can see, but people who just meet me can’t because I’m generally very fun and gregarious.” – Gerard Butler

3 Lessons from Gerard Butler About Fear and Relationship

Now that you know Gerard Butler’s net worth; Let’s take a look at some of the lessons we can learn from him about fear and relationships:

1. Fear is an Illusion

Most of the things we fear never happen. Or if they do happen, they are rarely as bad as we fear they will be. For most of us, fear is the worst thing that will happen to us. Reality isn’t as painful.

We keeping waiting for that amazing thing to happen in the future that will be the key to our happiness.

At the end of the day, what matters most are the people in our lives. Put them first every single day. Before work. Before the computer and before your hobbies. Treat them like they are your everything. Because they are.

How much is Gerard Butler worth?

Gerard Butler’s net worth is estimated to be $40 Million.

How old is Gerard Butler?

How tall is Gerard Butler?

Gerard Butler is an amazing actor who has been in movies such as ‘Coriolanus’, ‘The Phantom of the Opera’, ‘300’, ‘P.S I Love You’, ‘The Ugly Truth’ and ‘Hunter Killer’.

As of November 2022, Gerard Butler’s net worth is approximately $40 Million.

What do you think about Gerard Butler’s net worth? Leave a comment below.