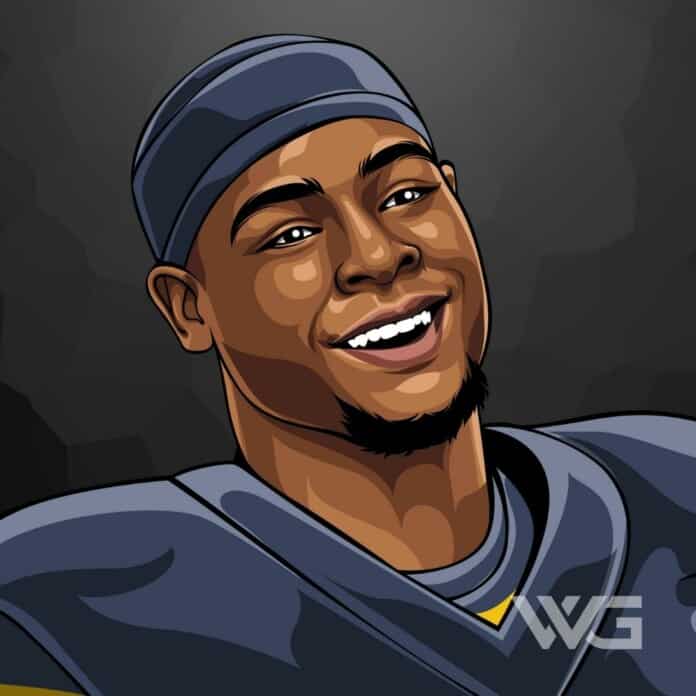 What is Le’Veon Bell’s net worth?

Le’Veon Andrew Bell Sr. is an American football running back for the New York Jets of the NFL. He played college football at Michigan State and was drafted by the Pittsburgh Steelers in the second round of the 2013 NFL Draft.

Le’Veon Andrew Bell was born on the 18th of February, 1992, in Ohio. Bell had two brothers, and they all played football together. Bell’s brothers also made their respective careers in American football.

Bell attended ‘Groveport Madison High School’ in Ohio, where he played multiple sports. He played football and basketball, apart from running track. He played as a running back for his school football team.

Bell was expected to be selected in the second round of the selections. By then, he had been considered as the fifth-best running back by ‘NFLdraftscout.com,’ which was a bankable portal.

The ‘Pittsburgh Steelers’ selected him as the 48th overall player in the second round. Thus, he became the second running back to be selected in that season. In June 2013, the ‘Steelers’ signed a contract with him that bound Bell with them for the next four years.

His rookie season was highly successful. He ended the season with 860 rushing yards, 244 carries, and 8 rushing touchdowns.

Bell began the 2014 season as a starter for his team and aided his team in scoring a victory against the ‘Cleveland Browns.’

By the end of a few more games that season, he became his team’s first running back to run 100 yards from scrimmage in seven consecutive games.

He finished yet another successful season and averaged 4.7 rushing yards per carrying. By the end of the season, he was named to the ‘Pro-Bowl’ and his fellow players ranked him at the number 16 on the ‘NFL Top 100 Players of 2015’ list.

In 2017, he launched himself as a musician, with the stage name “Juice.” He released his debut 16-song album on ‘SoundCloud.’ His songs ‘Target’ and ‘My Side of Things’ became particularly famous, as they reflected his turbulent football career.

Here are some of the best highlights of Le’Veon Bell’s career:

“That was the biggest mix-up the whole time, I thought I had to sit out until Week 10 or else they can tag me again. Around before the bye week, that’s when I found out I didn’t have to play.” – Le’Veon Bell

“I was so close to doing it. At the same time, I was so torn. Do I go through that? Will they embrace me or will they not? I eventually decided I sat out 10 games, I can sit six more. At the time, the team was malfunctioning, having problems, a lot of blame on me. I didn’t want to come back and not feel welcome.” – Le’Veon Bell

Now that you know all about Le’Veon Bell’s net worth, and how he achieved success; let’s take a look at some of the strongest lessons we can learn from him about hard work:

We never know when we will no longer be here so enjoy the moment right now because the next one might not happen.

On their death bed, no one ever said that they wished they worked more hours. What they do say is that they wish they had spent more time with their friends and loved ones.

3. Success is NOT a Straight Line

There were points in my life when I thought the world was going to end because of my failure. Big shocker, it didn’t, and I emerged from every missed success stronger. Your failures will help you grow in the long run. It’s also good to talk about your dreams to others; you never know when someone will be able to lend a hand.

How much is Le’Veon Bell worth?

Le’Veon Bell’s net worth is estimated to be $12 Million.

How old is Le’Veon Bell?

How tall is Le’Veon Bell?

Le’Veon Bell is an American football player who plays as the running back for the ‘Pittsburgh Steelers’ of the ‘National Football League’. By the age of 18, he was listed as the number 211 running back in the entire country.

What do you think about Le’Veon Bell’s net worth? Leave a comment below.