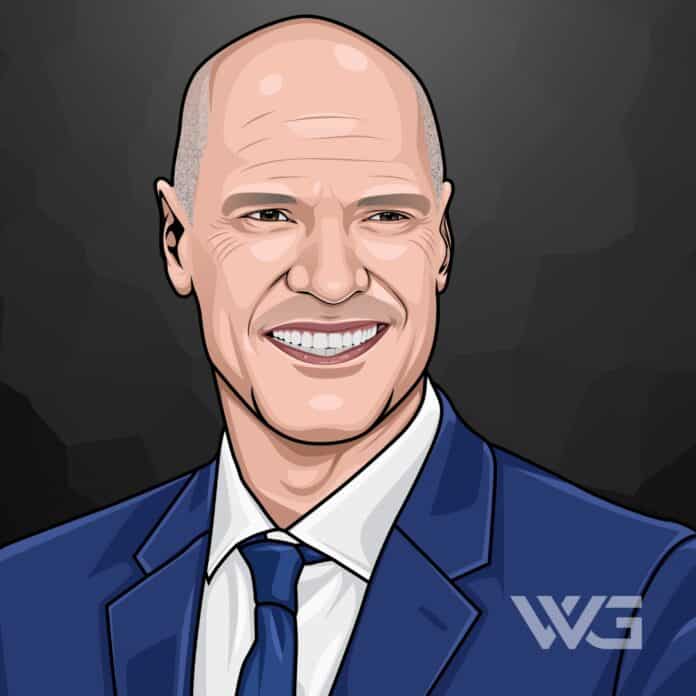 What is Mark Messier’s net worth?

During his time on the ice, Messier became a six-time Stanley Cup champion and one of the best players in the NHL.

As of November 2022, Mark Messier’s net worth is estimated to be $65 Million.

When Mark was young, the Messier family moved to Portland, Oregon, where he played for the Portland Buckaroos in the minor pro Western Hockey League.

In 1969, the family moved back to St. Albert after Doug Messier, a former ice hockey player, had retired from the rink.

There, Mark attended St. Francis Xavier High School in Edmonton, where he also played junior hockey with his father, serving as his coach and mentor.

In 1976, Messier joined the Albert Junior Hockey League, where his father coached, and after performing well on the ice, he was named captain of the team in 1977.

However, in 1978, he started looking for alternatives and ended up joining the World Hockey Association with the Indianapolis Racers.

After the WHA went under in 1979, Messier made himself eligible for the NHL draft and ended up being selected by the Edmonton Oilers.

Mark Messier started playing for the Edmonton Oilers in 1979, and he quickly made a name for himself as one of the best offensive players, earning a spot on the NHL First All-Star Team in 1983.

Unfortunately, mentions between Messier and the Oilers mounted in 1990 after he made a statement that the team wasn’t willing to take the necessary steps to keep important players.

This culminated in one of the team’s many cost-cutting moves, which resulted in Messier being traded to the New York Rangers.

Messier would play with the New York Rangers until 1997, winning his second Hart Memorial Trophy in the process.

In 1994, Messier scored the game-winning goal at the Stanley Cup Finals, which earned the New York Rangers their first Stanley Cup victory in 54 years.

After leaving the New York Rangers, Messier signed with the Vancouver Canucks, returning to Canada after six years.

Regrettably, with the Vancouver Canucks, Messier had his worst NHL season, made worse by subsequent injuries that would hinder his performance during his final seasons with the team.

Once his contract was up, the Canucks made no attempt to re-sign Messier, causing him to go back to the New York Rangers in 2000.

With the Rangers, Messier played slightly better and, in 2003, rose to become second on the all-time point-scoring list, having earned 1,851 points during his career.

Following the end of the 2004 season, Messier announced his retirement from ice hockey, having enjoyed a career spanning over four decades.

Mark Messier has earned an extraordinary amount of money to become one of the richest hockey players in the world, and his net worth is still increasing.

Having been active since 1978, Messier has enjoyed many significant paydays as one of the most valuable players in the NHL.

Although he falls just short of being as wealthy as Pavel Bure, Mark Messier certainly did well for himself and most likely would have topped the list if he was still actively playing today.

Mark Messier had his first son, Lyon, with his former girlfriend Lesley Young in 1987, and he has since married Kim Clark, who he has two more children with; son Douglas Paul and daughter Jacqueline Jean.

Outside of hockey, Messier is a strong advocate of preventative healthcare and is involved in the New York Police and Fire Widows’ and Children’s Benefit Fund.

He is also the owner of the Runaway Hill Club in the Bahamas, which his brother Paul helps him manage.

Messier is active on his official Instagram account, where he talks about hockey and posts photos of his endorsements and projects.

As a hockey legend, Mark Messier has earned numerous awards for his incredible talent on the ice.

Although all of his accomplishments have been important, some stand out for being more prestigious than others.

Here are some of Mark Messier’s greatest awards and achievements:

Like his former teammate Wayne Gretzky, Mark Messier has earned some truly impressive awards during his time with the NHL, each of which has set him apart from all other players.

How Does Mark Messier Spend His Money?

While we don’t know if Mark Messier owns one of the most expensive houses in the world, we do know that he is the proud owner of the Runaway Hill Club Hotel on Harbour Island in the Bahamas.

Situated on the pink sand beaches of the island, this tropical getaway is an English manor that has been converted into a cozy and luxurious hotel.

The most expensive accommodation available at the Runaway Hill Club is the Infinity five-bedroom oceanfront house, which sports three king beds, three baths, an outdoor courtyard, and an oceanfront deck.

To book this vacation house, you’ll have to pay $27k per week or $3k per day for a three-night minimum stay.

We don’t know how much Messier purchased this hotel for, but if the rates are anything to go by, it was certainly a huge amount!

Mark Messier’s career has been filled with many memorable moments which have helped earn him millions.

However, certain points in his career shine brighter than others for their impact on his fame and fortune.

Here are some of the best highlights of Mark Messier’s career:

Messier may not be actively playing anymore, but these milestones from his career will continue to be hailed as some of the greatest in NHL history.

Mark Messier has learned a lot during his long career, and he’s often talked about his mentality surrounding the game.

Despite being one of the most accomplished players in the NHL, it is obvious that Messier never lost his sense of humility, and he remains remarkably modest about what he’s achieved.

Here are our favorite quotes from Mark Messier:

There is a lot we can learn from Mark Messier and his remarkable career as an ice hockey player.

Now that you know all about Mark Messier’s net worth, we can take a look at what he can teach us about reaching our own goals.

Here are some of the best success lessons to learn from Mark Messier:

In order to become successful, you have to be consistent in everything that you do.

If you can’t be consistent with your skills, work to hone them so that the quality of what you do will improve enough to gain you recognition.

This is easier said than done, but it is essential if you want to find success.

Try to keep the big picture in mind while you’re on your grind and reward yourself for even small victories to keep pushing ahead without burning out.

You should always take pride in your success, but if you let it go to your head, it can come back to bite you in the ass.

If you dwell too much on your victories, you can quickly become complacent and fall behind because you’re too busy celebrating what has happened without thinking about what comes next.

Mark Messier has left a legacy in the NHL that has allowed him to become one of the wealthiest players in the sport.

Although he retired in 2004, he remains active in the sports industry, participating in numerous campaigns, charity events, and advertisements.

If you want to stay informed about Mark Messier’s earnings and career, be sure to check back often so you won’t miss any updates!

As of November 2022, Mark Messier’s net worth is estimated to be $65 Million.

What do you think about Mark Messier’s net worth? Leave a comment below.