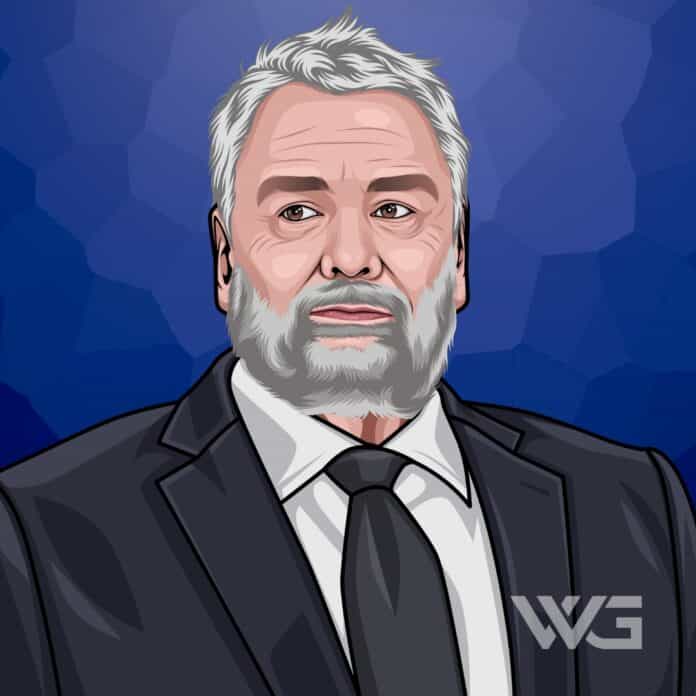 What is Luc Besson’s net worth?

Luc Paul Maurice Besson is a French film director, producer, and screenwriter who has come to be associated with the Cinema du look movement.

Still very active in the industry, Besson earns millions every year as he continues working on successful films.

Luc Paul Maurice Besson was born on March 18, 1959, in Paris, France, to parents who both worked as scuba-diving instructors.

Due to his parent’s careers, Luc was inspired to become a marine biologist, and he spent much of his youth traveling to resorts in Italy, Yugoslavia, and Greece.

However, his parents divorced when he was 10, and by the age of 17, he had suffered a diving accident that left him unable to dive anymore, putting his dreams of marine biology on hold.

While becoming a marine biologist was his biggest dream, he had also become interested in writing as a teenager, having penned the first drafts of Le Grand Bleu before he turned 18.

Falling back on this, Luc decided to take odd jobs on film sets across Paris to get a better feel for the industry before diving in himself.

Luc Besson started out as an assistant to directors, including Patrick Grandperret and Claude Faraldo.

He then moved on to directing short films and a couple of commercials before moving to the United States, where he started his own production company in 1980.

During the early 80s, Besson met composer Eric Serra, who he tapped to write music for his short film L’Avant Dernier.

While Besson worked on directing many films, his biggest hit came in 1997 with The Fifth Element, starring Bruce Willis, Milla Jovovich, and Gary Oldman.

Since the late 90s, Besson has written and produced numerous action movies, including the hit Taxi and Transporter series.

He also served as the writer and producer for the Taken series with Liam Neeson, which became another huge success for him.

Having become one of the richest directors in the world, it is safe to say that Luc Besson has earned quite a bit of money as a director, producer, and writer.

While his annual earnings have never been made public, we do know a bit about how he gained his fortune.

Despite not having a net worth as large as Michael Bay, Luc Besson has earned a fortune so far, and we can expect to see his wealth continue to grow exponentially as he continues working.

Luc Besson has been married four times, first in 1986 to actress Anne Parillaud, whom he had a daughter, Juliette with, in 1987, before the couple divorced in 1991.

Besson’s second marriage was to actress and director Maiwenn Le Besco, who he started dating when he was 31, and she was 15.

They later married in 1992, when Le Besco was 16 and pregnant with their daughter Shanna, who was born in 1993.

After Le Besco and Besson divorced in 1997, Besson then started dating actress Milla Jovovich while filming The Fifth Element.

Later that same year, Jovovich and Besson married but divorced in 1999.

In 2004, Besson married again to film producer Virginie Silla, and the couple has three children; Thalia, Sateen, and Mao Besson.

Starting in 2018, Besson has faced numerous allegations of rape and sexual assault, though he denies the claims and has yet to be found guilty.

On social media, Luc Besson can be found on his official Twitter account, where he posts mainly about his work.

As a celebrated director, Luc Besson has earned numerous awards for his work behind the camera.

While he has numerous wins and nominations under his belt, some have been more prestigious than others.

Here are some of the most significant awards from Luc Besson’s career:

He may not have earned as many accolades as James Cameron, but with 31 wins and 30 nominations to his name, Besson has done remarkably well for himself.

How Does Luc Besson Spend His Money?

The property consists of a 5,100 sqft mansion with glass-walled dining and living areas, a double-height library, and views of the stunning hillside.

Besson lived in this mansion for years until finally selling it in 2022 for $11.7 million, a massive discount from his original $14.9 million asking price.

While there is no information about where he has moved to, we’re certain it is similarly lavish and impressive.

Luc Besson has reached many important milestones during his time as a prominent director.

Although there have been many memorable moments during his career, some have been more noteworthy than others.

Here are some of the best highlights of Luc Besson’s career:

Despite not all of his films hitting their mark, Luc Besson has managed to create numerous successful films that have further increased his fame and fortune.

Luc Besson has gained a lot of wisdom during his long career behind the camera, and he often shares significant insights during his interviews.

Even if you’re not a die-hard fan of his films, there is something everyone can learn from this talented director.

Here are our favorite quotes from Luc Besson:

There are a lot of things we can learn from Luc Besson and his successful directorial career.

Now that you know all about Luc Besson’s net worth, we can look more closely at what he can teach us about reaching our own goals.

Here are some of the best success lessons to learn from Luc Besson:

1. Don’t Be Afraid To Start Small

When trying to become successful, people often make the mistake of rushing to build something big.

However, starting small is not only more realistic, but it can give you the foundation you need to grow your success.

Every successful person has to take chances, and learning when to go all in and when to step back is essential.

Calculated risks are necessary, but don’t throw away all your life savings on a whim, especially if you have no backup plans.

Similar to starting small, many people make the mistake of trying to do too much all at once.

However, if you focus on honing your skills and specializing in your field, you’ll be much more likely to get ahead without burning out.

Luc Besson has made a name for himself in the film industry as a creative director with a unique vision.

While he has faced some setbacks during his career, he continues to make films that grow his net worth.

Make sure to check back regularly so that you won’t miss any updates impacting Luc Besson’s wealth!

What do you think about Luc Besson’s net worth? Leave a comment below.