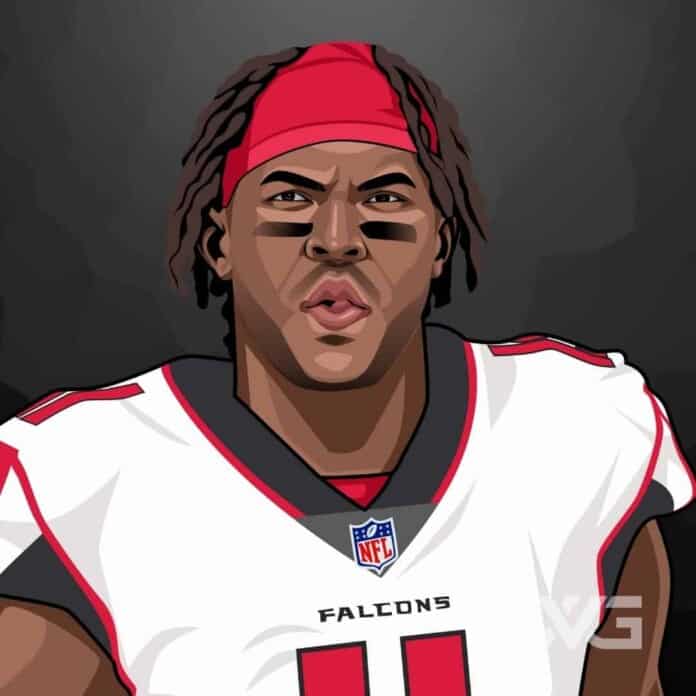 What is Julio Jones’ net worth?

Julio Jones is an American football wide receiver for the Atlanta Falcons of the NFL.

Jones played college football at Alabama, and in 2009, helped lead the Crimson Tide to an undefeated 14–0 season, including a victory in the 2010 BCS National Championship Game.

Quintorris Lopez Jones was born on the 8th of February, 1989 in Foley, Alabama.

His father left the family when he was only five. His mother was strict about keeping him shielded from the violent neighborhood he grew up in.

Jones is very close to his elder brother, Phillip, who lost his arm after sustaining gunshot wounds in 2014. He attended Foley High School in Alabama, where he played wide receiver and defensive end for the Lions high school football team.

In January 2011, Jones decided to forego his senior year at college to declare for the NFL Draft and showcased excellent performance at the 2011 NFL Combine in February despite a broken bone.

The Atlanta Falcons traded five draft picks to the Cleveland Browns to move up in the draft in order to select him as the 6th pick in the first round.

He began the 2012 season with exceptional performances and helped his team earn the top seed in the NFC for the NFL playoffs with a 13-3 record, but lost the championship to San Francisco 49ers.

Jones recorded his first receiving touchdown of the 2017 season in a Super Bowl LI rematch against the New England Patriots, which they lost.

He was named ‘NFC Offensive Player of the Week’ during week 12 following his incredible performance of 12 receptions for 253 receiving yards and two touchdowns.

Here are some of the best highlights of Julio Jones’ career:

“No. Hell no. I mean like for me to be at my best, I have a routine. So I need to go to sleep—I need to eat and I need to go to bed. Me watching them, it’s not gonna help me with the upcoming game. As you said, unless I’m playing them, I’m going to see what they got going on.” – Julio Jones

“I didn’t watch that game, I didn’t watch. Man, listen. I don’t watch football like outside of football, really. I will say, I watch it like with the guys if the guys say, “Hey, let’s go watch a game, let’s go do something,” things like that.” – Julio Jones

“Yeah, and then they had those games at 8:30 and stuff like that, but it’s like right before our game. So I’m already in bed though, so it’s not like I had to finish that game.” – Julio Jones

Now that you know all about Julio Jones’ net worth, and how he achieved success; let’s take a look at some of the lessons we can learn from him:

1. The Quality Of Time

The only place where success comes before work is in the dictionary.

How much is Julio Jones worth?

Julio Jones’ net worth is estimated to be $50 Million.

How old is Julio Jones?

How tall is Julio Jones?

Julio Jones is an American football wide receiver who has been invited to Pro Bowls five times and was selected first-team All-Pro twice.

What do you think about Julio Jones’ net worth? Leave a comment below.