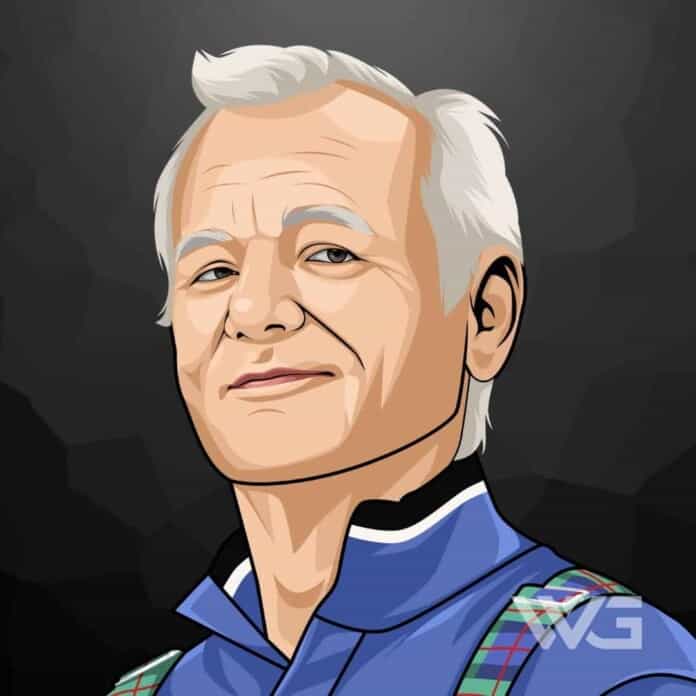 What is Bill Murray’s net worth?

Bill Murray is an American actor, comedian, filmmaker, and writer.

He first rose to fame on Saturday Night Live, a series of performances that earned him his first Emmy Award, and later starred in comedy films – including ‘Meatballs’, ‘Caddyshack’, and ‘Stripes’.

William James “Bill” Murray was born on the 21st of September, 1950, in Evanston, Illinois. Murray is the son of Lucille Collins, a mailroom clerk, and Edward Joseph Murray II, a lumber salesman.

He attended St. Joseph grade school and Loyola Academy. In order to fund his education at the Jesuit high school, he worked as a golf caddy in his teens.

Murray joined his brother in the cast for the improvisational comedy ‘The Second City’ in Chicago and got to study under Del Close. This gave direction to his life and he took up acting.

In 1979, he landed his first movie role in the box-office hit, ‘Meatballs’. It was followed by ‘Where the Buffalo’s Roam’ in which he portrayed Hunter S. Thompson.

In 1984, he co-wrote and acted in ‘The Razor’s Edge’. The movie did not do very well and he was so disappointed that he took four years off, appearing in only cameo roles.

He returned to movies with ‘Scrooged’ in 1988. It was followed by the sequel ‘Ghostbusters II’, the next year. He even co-directed the movie ‘Quick Change’ with Howard Franklin.

In 2012, he took up the role of President Franklin D. Roosevelt in the movie ‘Hyde Park on Hudson’. He also starred in Wes Anderson’s ‘Moonrise Kingdom’.

Here are some of the best highlights of Bill Murray’s career:

“I improvise whenever I feel it’s important, or whenever I think that something’s there. It’s nice to have a script that’s so well-written that I don’t have to improvise. I mean, I used to have to re-write whole movies; this is kind of nice.” – Bill Murray

“Melancholy is kind of sweet sometimes, I think. It’s not a negative thing.” – Bill Murray

“Harold Ramis and I together did the ‘National Lampoon Show’ off-Broadway, ‘Meatballs,’ ‘Stripes,’ ‘Caddyshack,’ ‘Ghostbusters’ and ‘Groundhog Day.’ He earned his keep on this planet. God bless him.” – Bill Murray

“When I work, my first relationship with people is professional. There are people who want to be your friend right away. I say, “We’re not gonna be friends until we get this done. If we don’t get this done, we’re never going to be friends, because if we don’t get the job done, then the one thing we did together that we had to do together we failed.” – Bill Murray

Now that you know all about Bill Murray’s net worth, and how he achieved success; let’s take a look at some of the lessons we can learn from him:

1. Be Alert and Available

“More than just for work, but available for life to happen to you. We’re living this life; we’re in this life.  If you’re not available, ordinary time goes past and you didn’t live it. But if you’re available, then you jump up dimensions. Life becomes much more full. You’re really living it.”

2. When the Opportunity To Prank Matt Damon Presents Itself, Take Advantage Of It

Always good advice to keep in your back pocket should you suddenly find yourself in the situation.

3. Do What You Need To Do To Keep the Plates Spinning

Even if it means heading back to South Carolina from Berlin every two weeks, be present where your presence is needed.

How much is Bill Murray worth?

Bill Murray’s net worth is estimated to be $180 Million.

How old is Bill Murray?

How tall is Bill Murray?

Bill Murray’s first successful movie was ‘Meatball”. It was followed by the cult classic ‘Caddyshack’ and box-office hits such as ‘Stripes’, and ‘Tootsie’. His most popular movie was ‘Ghostbusters’. He is considered to be one of the greatest actors of all time.

What do you think about Bill Murray’s net worth? Leave a comment below.

Maryse Ouellet is one of the most iconic Divas in the WWE, and she has made millions kicking ass in the ring.