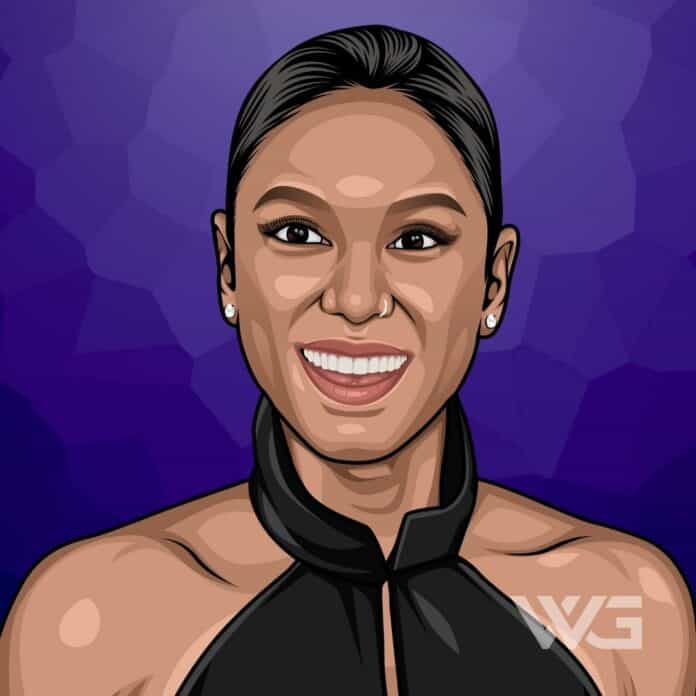 What is Eniko Hart’s net worth?

In addition to her modeling work, she is known for appearing on the Netflix documentary series Kevin Hart: Don’t F**k This Up in 2020.

Eniko Parrish was born on August 18, 1984, in Baltimore, Maryland, where she was raised by her Jamaican parents.

She is from a mixed ancestry, with Eniko proud of her heritage, including her Chinese roots and her Jamaican background.

As a teenager, she moved away from Baltimore, settling in Los Angeles to pursue her career in modeling.

Eniko Hart’s early career saw her working as a model for various brands, competing with some of the richest models in the world and establishing a name for herself in 2013.

She showed off her talent at BET’s modeling show, Rip the Runway, the annual fashion show held at the Hammerstein Ballroom in New York City.

In 2015, she expanded her career with her first television appearance and was featured with some of the richest actors in the world on the E! Live from the Red Carpet show.

She went on to appear on two episodes of Entertainment Tonight as herself, as well as being featured on the show Celebrity Game Face, where she was credited as Kevin Hart’s wife.

Eniko Hart also featured in the 2020 show Kevin Hart: No F**ks Given, a TV special that Hart filmed in the comfort of his own home.

Hart made international news when it was revealed she was dating the comedy star.

While there is no information available about Eniko Hart’s earnings over the course of her career, we can make estimates based on available data.

The average modeling salary in the United States is around $128,000, which provides a solid base figure we can apply to her work as a model.

Additional fees for her television appearances and work as a brand ambassador indicates that her career earnings will be high.

Eniko Hart’s precise net worth is unknown, but her wealth estimates have been made based on her relationship with Kevin Hart.

Worth several hundred million dollars, Hart’s enormous wealth is an indication of Eniko’s wealth potential based on community property and her husband’s earnings.

Since Kevin Hart continues to prove to be a hugely popular comedian and actor, Eniko’s net worth will likely increase over the coming years.

Eniko Hart is well known for marrying comedian and actor Kevin Hart, one of the richest comedians in the world, whom she met in 2014.

Eniko and Kevin Hart have two children together, with their first child Kenzo Kash Hart born in 2017, followed by their second child in 2020.

She has over 3 million followers on her hugely popular official Instagram account, where she posts lifestyle tips and other updates about her activities.

How Does Eniko Hart Spend His Money?

With her impressive net worth and work as a model, Eniko Hart is known for her luxurious dress sense and taste in fine jewelry.

Her wedding ring following her marriage to Kevin Hart featured some of the most expensive precious metals in the world, including a giant diamond.

The ceremony occurred at a private estate near Santa Barbara, California, in 2017, with only family and close friends in attendance.

Eniko Hart’s short but eventful career has so far seen her making a smooth transition from modeling into acting and television presenting.

Her relationship with Kevin Hart means she has access to some of the best talent agencies in Los Angeles, appearing on high-profile celebrity television shows.

Here are some of the best highlights of Eniko Hart’s career:

While her marriage to Kevin Hart has often overshadowed her professional successes, she’s had a promising start to a career as a model and television celebrity.

We can anticipate many more media appearances and modeling work as her career continues to unfold in the future.

While Eniko Hart has rarely conducted full-length interviews with the media, she nevertheless posts her thoughts on social media.

She was outspoken when she discovered Kevin Hart’s infidelity, sharing how she heard the news and her reaction with fans.

Here are our favorite quotes from Eniko Hart:

Now that you know all about Eniko Hart’s net worth let’s see what lessons we can learn from her life experiences.

Her public drama and relationship issues – and how she handled the situation – offer a lesson for anyone struggling with friends and family.

Here are some of the best success lessons to learn from Eniko Hart:

1. Travel As Often As You Can To Enrich Your Soul

Eniko Hart is a firm believer in the importance of broadening your horizons by traveling as far and wide as you can.

She loves to explore new cultures and meet new people from different backgrounds and has been to many places, including St. Lucia and Thailand.

As well as her two children with Kevin Hart, Eniko is someone her stepchildren look up to for advice and inspiration.

She has a great relationship with Heaven and Hendrix, the two children Kevin had through his marriage to Torrei Hart.

3. Never Be Afraid To Speak Your Mind

As the world saw for themselves when Eniko Hart discovered her husband was cheating on her, she isn’t afraid to speak her mind.

She responded to the news publicly denouncing him for his behavior, and it paid off with his reflection on what he’d done and his responsibilities as a father.

So, there you have it, our complete overview of the modeling work, television appearances, and celebrity romance that helped Eniko Hart earn her net worth.

Her career appearing on various television shows means we can expect her body of work to continue to increase over the coming years.

To make sure this article covers everything you need to know, we’ll be updating it in the future to include changes to her career and net worth.

What do you think about Eniko Hart’s net worth? Leave a comment below.