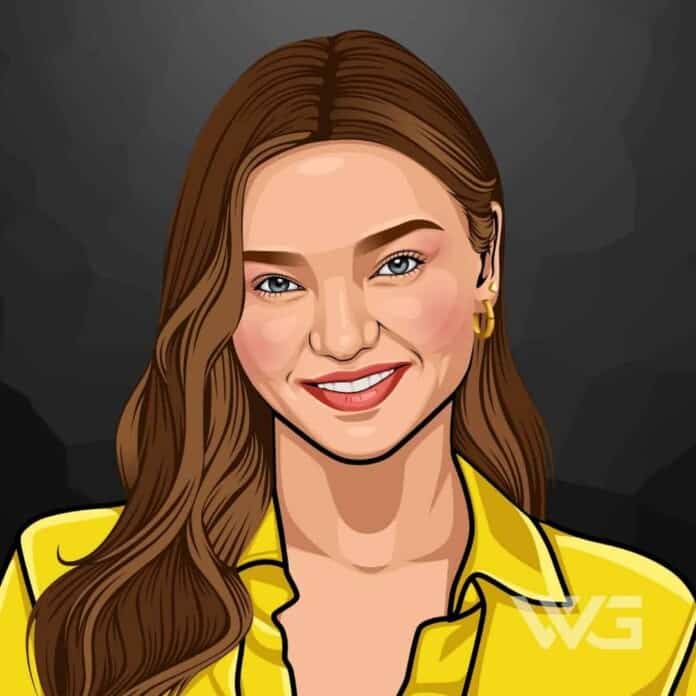 What is Miranda Kerr’s net worth?

Miranda Kerr has made a name for herself in the modeling industry, but she has also made appearances on TV, in music videos, and in film.

While she may not yet be the highest-paid model in the world, she is certainly on track to continue increasing her impressive net worth.

As of November 2022, Miranda Kerr’s net worth is estimated to be $60 Million.

Miranda Kerr was born in 1983 in Sydney, Australia, and raised in Gunnedah by her parents, Therese and John Kerr.

When she was young, she raced motorbikes and rode horses around her grandmother’s farm and studied as an exchange student in America.

As a teenager, her family moved to Brisbane, Queensland, to allow Miranda to experience city life after her first boyfriend, Christopher Middlebrook, died in a car accident.

In 2000, Kerr graduated from All Hallows School and enrolled at the Academy of Natural Living to study health psychology and nutrition before pursuing a modeling career.

In 1997, Miranda Kerr signed with Chic Management’s branch in Sydney and made a name for herself modeling for the surf chain Billabong.

It wasn’t long before Kerr became the ambassador of Swimwear brand Seafolly, taking modeling assignments in both Australia and Japan.

After this success, Kerr moved to New York City and signed with Next Model Management, which hooked her up with numerous runway gigs in 2004.

At the same time, Kerr secured a contract with Maybelline New York Cosmetics, and due to the success of this, she landed a place as the first Australian Victoria’s Secret Angel, joining the prestigious ranks of big names like Heidi Klum.

Kerr launched her own brand of organic skincare products called KORA Organics in 2009 and her own self-help book titled Treasure Yourself, which was aimed at female teenagers.

In 2013, Forbes reported that Kerr was one of the highest-paid models, and the same year went on to design a jewelry line for Swarovski and become the official face of the company.

Miranda Kerr has since served as a guest mentor on Australia’s Next Top Model and appeared in a video campaign for Louis Vitton, celebrating their Tambour Horizon smartwatch.

Miranda Kerr may not be one of the richest models in the world, but she has been one of the highest-paid many times throughout her career.

Although we don’t know everything about her yearly salary, we do have some information that gives us an insight into just how much Kerr earns.

According to various sources:

While Kerr isn’t quite making as much as Juanita Jordan, Petra Ecclestone, or Kylie Jenner, she is well on her way to climbing the ranks and becoming one of the wealthiest models in the world.

In 2007, Kerr began dating actor Orlando Bloom, and in June 2010, the pair became engaged, tying the knot a month later.

Kerr gave birth to her son Flynn Christopher Blanchard Copeland Bloom in 2001, but by 2013, Kerr and Bloom announced their intention to divorce.

In 2015, Kerr began dating billionaire Evan Spiegel, the co-founder and CEO of Snapchat and they married in 2017.

Later the same year, Kerr announced she was pregnant with her second child, Hart Spiegel, who she gave birth to in 2018.

Ten months after the birth of Hart, Kerr announced her third pregnancy, Myles Spiegel, who she gave birth to in 2019.

Miranda is very active on her official Instagram account, often posting photos from current and past shoots.

Kerr also has her own official website, where she posts about her upcoming projects and collaborations, along with her home goods line and her skincare company KORA Organics.

Although Miranda Kerr hasn’t won any awards for her work, she has benefited from many important achievements.

Here are some highlights from Miranda Kerr’s career:

How Does Miranda Kerr Spend Her Money?

With her huge net worth, it’s safe to say that Miranda Kerr knows how to live luxuriously, and the best example of this is her $120 million estate that she owns with her husband, Evan Spiegel.

In 2021, Kerr shelled out $25 million for a Los Angeles home, and two years later, they finalized the purchase of the land next door for an additional $120 million.

It has taken so long for them to fully secure their home because the mansion is undergoing a multi-year rebuild to renovate it entirely.

Sold to the couple by British Billionaire Ian Livingstone, the estate sits just across the street from the infamous Playboy Mansion and is set to be one of the most extravagant homes in Beverly Hills when it is finished.

Fortunately, the couple has a $30 million villa in Paris to live in while they wait for construction on this L.A. home to wrap up.

Miranda Kerr has reached many milestones throughout her successful modeling career that help her stand out from others in the industry.

Here are some of the best highlights of Miranda Kerr’s career:

Although Miranda Kerr is most well-known for her beauty, she also has a way with words and has said many inspirational things to help lift people up.

Here are our favorite quotes from Miranda Kerr:

Now that you know all about Miranda Kerr’s net worth, we can look at the lessons she can teach us about finding success in our own lives.

Here are some of the best success lessons to learn from Miranda Kerr:

1. Not Every Day Will Be A Bad Day

When you’re having a bad day, it can feel like it drags on and on with no end in sight.

However, to find your success, it’s important to remember that everyone has bad days and that they will pass.

If you give up on a bad day too soon, you risk missing opportunities that could change things for the better!

To become successful, you’ll have to struggle through some tough times that may make it seem easier to give up than keep going.

Remember that every struggle has a purpose and that it can only make you stronger and smarter overall.

3. Have A Positive Mental Attitude

No matter what you’re doing, try to keep a positive mental attitude.

If you drag yourself down with negative thoughts, you’re only going to fall behind instead of getting ahead.

Wake up and think positive, head to work and keep that momentum, and take time to appreciate the good things before heading to bed.

Do this, and you’ll be well on your way to reaching your goals and not getting burdened by negativity.

Miranda Kerr is an Australian model who has taken the world by storm and become one of the highest-paid models in the industry.

Between her high-profile jobs and personal business ventures, we expect that Miranda Kerr’s net worth will continue growing steadily, possibly allowing her to become one of the wealthiest models in the world.

Be sure to check back often to stay up-to-date on any changes!

As of November 2022, Miranda Kerr’s net worth is estimated to be $60 Million.

What do you think about Miranda Kerr’s net worth? Leave a comment below.

What is Kourtney Kardashian's net worth? Introduction As of ,...