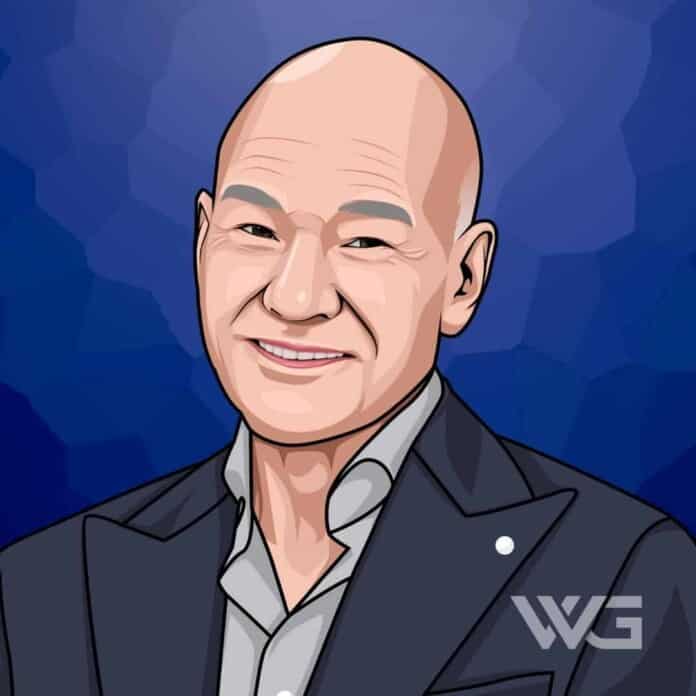 What is Patrick Stewart’s net worth?

As of December 2022, Patrick Stewart’s net worth is roughly $75 Million.

Patrick Stewart is an English actor whose work has included roles on stage, television, and film in a career spanning six decades. He has been nominated for Olivier, Golden Globe, Emmy, Screen Actors Guild, and Saturn Awards.

Patrick Stewart was born on the 13th of July, 1940, in Mirfield, England. His siblings include Geoffrey and Trevor, both of whom are elder to him. He had a troubled childhood and witnessed physical abuse inflicted on his mother by his father.

He was educated at ‘Crowlees Church of England Junior and Infants School’ and later at ‘Mirfield Secondary Modern School’.

In 1957, Stewart enrolled at Bristol Old Vic Theatre School. He made his professional debut a couple of years later, at the repertory theatre in Lincoln and then at the ‘Manchester’s Library Theatre’.

In 1971, he made his Broadway appearance as Snout in Shakespeare’s ‘A Midsummer Night’s Dream’. A couple of years later, he started performing in minor roles in the television serials and in British and American films.

His role as Professor Xavier in the ‘X-Men’, an American blockbuster film released in 2000, earned him great popularity and he acted in the two sequels of the film as well.

Here are some of the best highlights of Patrick Stewart’s career:

“I saw Waiting for Godot when I was 17 in rep with a then-unknown actor called Peter O’Toole playing Vladimir. I remember leaving the theatre promising myself that one day I would have a go at this play and then pretty much forgot it for 50 years.” – Patrick Stewart

“All I ever wanted to do was be on stage, if possible acting in Shakespeare. And to be as good as I could be. There was nowhere else I wanted to go. The TV was of no interest. Films were just a fantasy. Yet I was convinced that when we found ourselves in that world of fantasy and sci-fi, it was our classical background and our training that equipped us for that larger-than life-world.” – Patrick Stewart

“I heard police or ambulancemen, standing in our house, say, ‘She must have provoked him,’ or, ‘Mrs. Stewart, it takes two to make a fight.’ They had no idea. The truth is my mother did nothing to deserve the violence she endured. She did not provoke my father, and even if she had, violence is an unacceptable way of dealing with conflict. Violence is a choice a man makes and he alone is responsible for it.” – Patrick Stewart

“At 12 years old in the dangerous world that I was in, with very difficult home life, I found the stage was the safest place to be. It was predetermined and predictable – and furthermore you got to be someone else. All the problems only began when you left the building.” – Patrick Stewart

Now that you know all about Patrick Stewart’s net worth, and how he achieved success; let’s take a look at some of the lessons we can learn from him:

1. Don’t Take Yourself Too Seriously

Despite impressive accomplishments, high salaries, and fans around the world, Patrick Stewart seems to never let it get to his head. The first to laugh at himself, Patrick isn’t afraid of his perceived shortcomings: “I am not the archetypal leading man. This is mainly for one reason: as you may have noticed, I have no hair.”

Where many older celebrities avoid social media, and sometimes the internet altogether, Patrick Stewart is quick to embrace new technologies.

One would think that an actor as accomplished as Sir Patrick Stewart has nothing to fear. Despite his impressive acting resume, Patrick continues to push himself in his craft.

How much is Patrick Stewart worth?

Patrick Stewart’s net worth is estimated to be $75 Million.

How old is Patrick Stewart?

How tall is Patrick Stewart?

Patrick Stewart is a prolific actor who has made a name for himself through his work on the stage, sitcoms, and Broadway. Though he proved his might as an actor in television serials and films, he always harbored a great deal of passion towards the Shakespearean theater, where he spent most of his career.

As of December 2022, Patrick Stewart’s net worth is estimated to be roughly $75 Million.

What do you think about Patrick Stewart’s net worth? Leave a comment below.