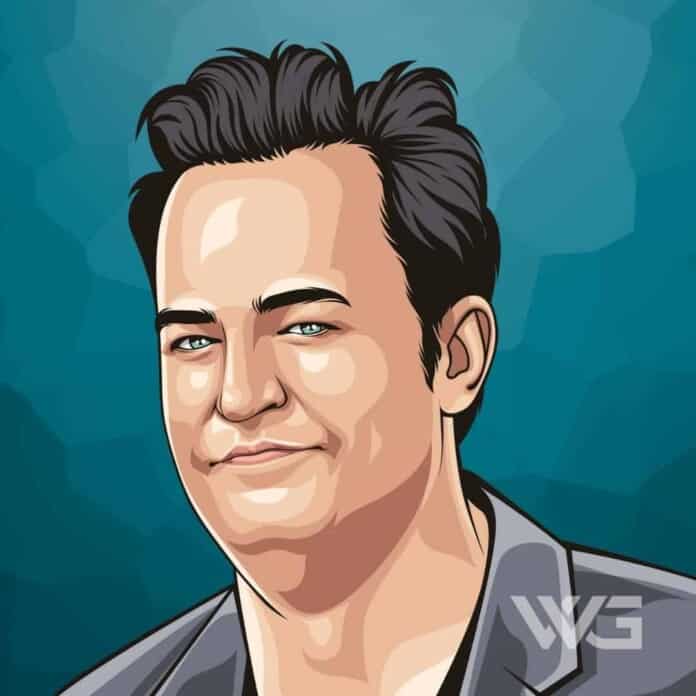 What is Matthew Perry’s net worth?

As of February 2023, Matthew Perry’s net worth is approximately $120 Million.

Matthew Langford Perry is a Canadian-American actor, comedian, and playwright from Williamstown, Massachusetts.

Perry received worldwide recognition for his role as Chandler Bing on the NBC sitcom ‘Friends’ which ran from 1994 to 2004. He has appeared in a number of films, such as ‘Fools Rush’, ‘The Whole Nine Yards’, and ’17 Again’.

Matthew Langford Perry was born on the 19th of August, 1969, in Williamstown, Massachusetts. He is the son of Suzzane Marie and John Bennett. He studied at Rockcliffe Park Public School where he was a very proficient tennis player.

Perry attended high school at The Buckley School. During this time he developed an interest in acting and appeared on several of the school’s stage productions.

Perry began his acting career by making a guest appearance in television shows during the early 1980s. He played a rookie cop, Billy in the sitcom ‘Sydney’ that premiered on CBS in 1990. The main cast also included Valerie Bertinelli and Craig Bierko.

He landed his most famous role in 1994 when he was selected to portray Chandler Bing in the sitcom ‘Friends’. The series which revolved around the life of a group of friends in New York City was a critical as well as commercial success.

Matthew played the lead role in ‘The Ron Clark Story’ (2006), a television film based on the real-life educator Ron Clark who brings about a difference in the lives of his minority students whom nobody believed in. His performance was critically acclaimed.

In 2011 he starred in ‘Mr. Sunshine’ which he also co-created. However, the show was short-lived and canceled due to low ratings.

He starred as Ryan King in the sitcom ‘Go On’ which is about a sports talk radio host who is trying to move on with life after the death of his wife. The show ran from 2012 to 2013.

Here are some of the best highlights of Matthew Perry’s career:

“When I was younger, I used humor as a tool to avoid getting too serious with people – if there was deep emotional stuff going on, then I would crack a joke to defuse the situation.” – Matthew Perry

“Nine times out of 10, women don’t want to fix a problem, they just want to be understood. I’ll never get that.” – Matthew Perry

“I have an insanely dorky taste. Basically, if you’re a woman, and you’re under any kind of emotional duress, and you sing a song, I will listen to it forever. It’s odd being a 37-year-old heterosexual male who owns nothing but Sarah McLachlan and Tori Amos. But I’ll go against that at first and play something boring like James Taylor.” – Matthew Perry

Now that you know all about Matthew Perry’s net worth, and how he achieved success; Let’s take a look at some of the strongest lessons we can learn from him:

1. You Can’t Read Someone Else’s Mind

No, you can’t read the other person’s mind, so keep your lips held together and allow them to tell you what they want to say.

2. If You Don’t Express Your Feelings, Don’t Expect Other People to Understand You

Since we can’t read minds, if you don’t express your feelings, no one is going to know how you feel. Nothing is wrong with having “feelings” whether you are a man or a woman.

The reason that we are hesitant to share our feelings is that we fear the pain of rejection. So with the people who are closest to you, make sure that they know how you feeling about them. As far as other conversations go, fully express yourself.

Death is the subject I don’t like talking about and I definitely don’t want to think about it. The truth, however, is that we all must die. There is really never a good time to leave everyone behind because the people left behind won’t ever want you to leave them.

How much is Matthew Perry worth?

Matthew Perry’s net worth is estimated to be $120 Million.

How old is Matthew Perry?

How tall is Matthew Perry?

Matthew Perry is an actor and comedian who is best known for playing Chandler Bing on the sitcom ‘Friends’. He has appeared in several other television series and has also played supporting roles in numerous films like ‘Fools Rush’, and ‘The Whole Nine Yards’.

The talented actor has been nominated for the Golden Globe for his performance in the television movie ‘The Ron Clark Story’.

What do you think about Matthew Perry’s net worth? Leave a comment below.