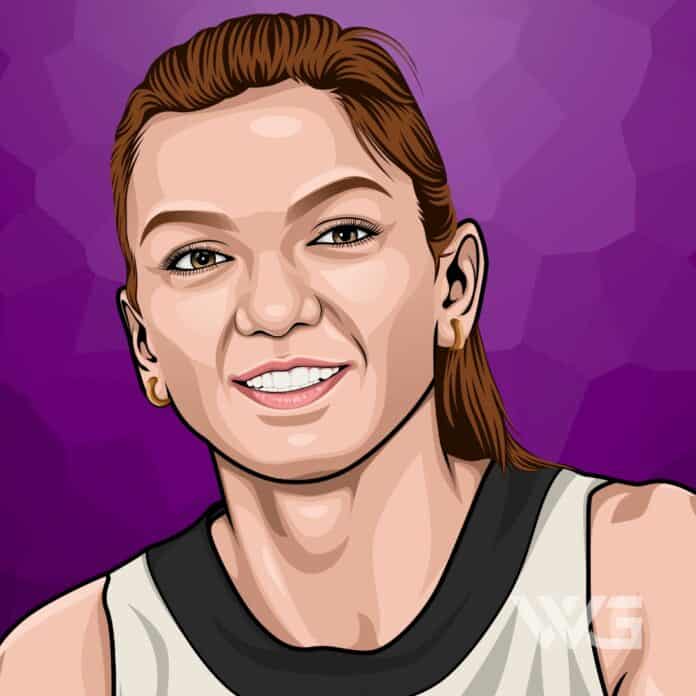 What is Simona Halep’s net worth?

Simona Halep is a professional tennis player from Romania who is ranked as the number one female singles player in the world.

She has become one of the highest-earning tennis players of all time with major tournament wins on 3 continents.

The family’s athletic abilities were carried in her genes as Simona started playing tennis at the age of four.

Her brother Nicolae used to play the sport along with Simona but found it was not for him and quit a few years into training.

During her time practicing with coach Hugh Ghass, she also took a liking to other sports such as handball and football, but mainly focused on tennis.

On hitting her teenage years, Simona was partly sponsored by Romanian millionaire, Corneliu Idu and finished low-level grade four at the ITF Junior Circuit at the age of thirteen.

She moved to Bucharest to train and focus exclusively on tennis, becoming the world’s number-one junior player.

By 2007, Simona had won her first two ITF singles and doubles titles but it wasn’t until she defeated number 95-ranked Angelique Kerber in 2009, that she started to make her mark.

Simona had her first standout performance in Spain at a WBA tournament where she beat many world-ranked players in 2010.

In 2013 she also won the “Champions Tournament” and was named “WTA’s Most Improved Player”, which was a big deal as she was the first Romanian player to receive this distinction since Virginia Ruzici in 1978.

Simona reached the world Top 10 for the first time in 2014 and advanced to the quarterfinals at the Australian Open Grand Slam tournament.

With an extremely successful season in 2017, Simona finally reached world number one. After facing many of the big-league tennis players, Simona struggled with an Achilles injury as well as a back injury throughout the season.

On making a comeback, Simona didn’t perform well and fell to number eight in the world tennis rankings.

Throughout the rest of the season, she was determined to get back on top and finished the season as number four in the world.

She has defeated top-level players such as Serena Williams, Li Na, Caroline Wozniacki, which led to her signing her main sponsor, Adidas, and concluding deals with other top brands such as Mercedes Benz and Lacoste.

In recent years, Simona has announced a change of coach and brought on Serena William’s former coach, Patrick Mouratoglou.

2022 was a tough year for Simona as she suffered from panic attacks as well as various injuries and then announced she would not be playing for a while due to nose surgery.

In October 2022 she was prevented from playing due to testing positive for the banned substance, Roxadustat, at the US Open.

In 2008 she won the French Open at Roland-Garros in a tightly contested final against Sloane Stephens.

Simona won the match 3-6, 6-4, 6-1, winning her first major championship after finishing as the runner-up three times before.

Halep’s French Open win was the talk of Romania as Virginia Ruzici had previously won the tournament in 1978 and Halep was only the second Romanian woman to win a major.

In the same tournament, the defending champion Rafael Nadal was able to defeat Dominic Thiem in the men’s singles final, 6–4, 6–3, 6–2.

Halep’s win at Wimbledon in 2019 was a high point for this tennis star as she watched players like Martina Navratilova, one of the richest tennis players in the world, win the tournament and wanted to emulate her success.

Here’s a breakdown of Simona Halep’s annual net worth:

She is one of the highest-paid female tennis stars in the world with career earnings in excess of $40 million.

This places her in the same bracket as Maria Sharapova, Anna Kournikova, Chris Evert, and Jelena Jankovic who have all become multi-millionaires during their tennis careers.

Simona married a Macedonian billionaire, Toni luruc, owner of several companies in Romania, in 2021. The couple seemed happy until announcing their divorce later in the same year that they were married.

Since then, there has been talk of Simona dating football player Radu Barbu and tennis player Horia Tecau. Little is known about Simona’s current personal life but what we do know is that tennis is her whole life.

Simona has struggled with the recent drug controversies and claims she never took Roxadustat and disputes the drug test results.

At the age of 22, Simona cracked the top 10 in 2014, where she remained for 7.5 years, winning two grand slam titles, 23 WTA titles altogether, and spending 64 weeks as the top player in the world.

Here are a few of the most significant events in Simona Halep’s career:

At the 2014 French Open, a three-set instant classic against Maria Sharapova occurred, but in the third set and leading 3-0, she suffered a painful defeat to newcomer Jelena Ostapenko in the 2017 final at Roland Garros.

Then, following a succession of lengthy matches at the 2018 Australian Open, Halep’s efforts in her close three-set defeat to Caroline Wozniacki landed her in the hospital on an intravenous drip.

How Does Simona Halep Spend Her Money?

Simona is the proud owner of some of the most expensive cars in the world including a variety of top-class exotics, such as an AMG S36 Convertible, a Mercedes AMG G63, and a Porsche Carrera 911.

Halep also opened her café in 2017 named SH, which is in her home town, Constanta, Romania, and also purchased two properties and the Drachenhaus hotel in Brasov for $2 million.

Simona finds her charity work to be important to her and started her foundation, called the Simona Halep Foundation to assist people worldwide.

At the beginning of the coronavirus pandemic, Simona contributed 30,000 euros to assist with medical equipment purchases in her country.

Simona defeated Sloane Stephens in the French Open to win her maiden major slam final after losing to Wozniacki previously.

Since the beginning of the grass-court season in 2022, Halep’s game has improved immeasurably with her winning 18 of her past 21 matches.

Here are some of the best highlights of Simona Halep’s career:

At the French Open, during the first grand slam together with her new coach Mouratoglou, Halep experienced a panic episode when losing to Zheng Qinwen in the second round.

This uncharacteristic response from Halep was greeted with consternation by her supporters, who had previously questioned her association with Mouratogou.

Halep is now trying to rebuild her career after the pandemic and is determined to take it slow so that she can give herself time to recover her previous form.

Here are our favorite quotes from Simona Halep:

Simona has always been upbeat and positive about her prospects and tries to keep that mindset as she moves into the next phase of her career.

Simona revealed that she loves elegant jewellery and signed an endorsement deal with the makers of some of the most expensive watches in the world, Hublot.

Now that you know all about Simona Halep’s net worth, here are some of the best success lessons to learn from Simona Halep:

Simona feels that even though you may think that a situation is bad, you just have to keep pushing forward.

Simona has had to deal with tough moments due to injuries and then testing positive for drugs – but this will not stop her from doing whatever she can to return to tennis as quickly as possible.

2. Everyone Is Fair Game

Halep says that the person you are competing against has the possibility of winning, but at the same time, so do you.

If you win, you win and if you don’t, well, then you don’t, it’s all a mental test to see if you can remain strong, no matter the outcome, she says.

Simona believes that you should always do everything you can with confidence and, if you can’t, act confident – because who is going to know?

It has always been important for Simona to have confidence and aggression on the court so she can win the emotional battle before claiming a match victory.

Simona fought her drug-related suspension and is happily back on the tennis circuit and itching to regain her previous form.

In the meantime, Simona is taking it easy, resting, and using the time to recover from her many injuries.

She recently won the National Bank Open championship for the third time in her career, so the former World No. 1 cemented her comeback to the Top 10 in fine fashion.

What do you think about Simona Halep’s net worth? Leave a comment below.