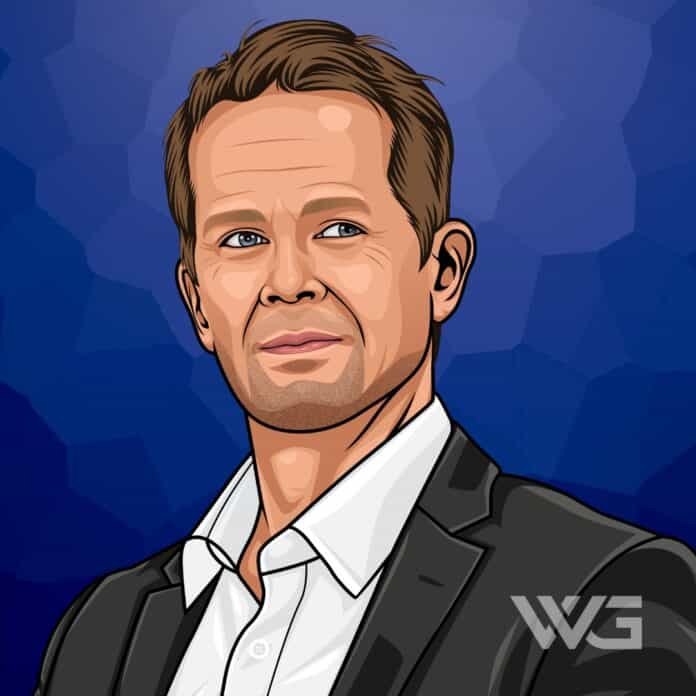 What is Stefan Edberg’s net worth?

Stefan Bengt Edberg is a former Swedish professional tennis player and one of the only two men to be ranked No. 1 in both singles and doubles during the Open Era.

Along with his six Grand Slam singles titles, Edberg was also a member of the Swedish Davis Cup team, which won four titles.

As of February 2023, Stephan Edberg’s net worth is estimated to be $25 Million.

While not much is known about his childhood, we do know that he excelled at tennis and quickly made his way up the ranks in the junior league.

He first grabbed the tennis world’s attention when he became the first and only player of the Open Era to win all four junior Grand Slam titles in 1983.

Later the same year, Stefan made his way into the professional arena, winning his first doubles title in Basel.

While Stefan started his career with many victories, not everything was great from the get-go.

The same year he turned professional, he accidentally caused the death of Dick Wertheim, a linesman, due to an errant serve during the US Open.

Fortunately, this accident didn’t put an end to his career before it truly got off the ground, and in 1984, he won his first top-level singles title.

Edberg caught the attention of fans in the United States when he took first place at the US Indoor in Memphis in ’85.

In 1990, an abdominal injury caused him to retire from the Australian Open, but he still managed to take the No. 1 ranking when he won the Super 9 tournament in Ohio.

Edberg won his final two Grand Slam titles at the US Open in 1991 and 1992, but his appearance at the 1993 Australian Open was his final Grand Slam singles competition.

During his final year, he won his third and final doubles title at the Australian Open and then left the court to enjoy retirement.

However, he came back in 2008 for the Black Rock Tour of Champions and in 2012 in a one-set exhibition match in Qatar.

He also coached Roger Federer for the 2014-15 season, and today, he is the director and joint owner of an equity management company called Case.

As one of the richest tennis players in the world, Stefan Edberg has earned an impressive net worth.

Thanks to his skills on the court, he has earned a fortune in prize money that he’s continued to increase as an asset manager.

While he may not have earned as much as Rafael Nadal, Stefan Edberg has certainly made a decent fortune during his tennis career.

Despite being retired for over a decade, Edberg has maintained his wealth well, and we expect that he will only continue increasing his wealth as time goes on.

Stefan Edberg married Annette Hjort Olsen in 1992, and together they have two children, Christopher and Emilie.

Before her marriage to Edberg, Annette briefly dated Mats Wilander, her future husband’s rival on the court.

Aside from tennis, Stefan is a supporter of the English football team Leeds United, as well as the Swedish ice hockey team, the Vaxjo Lakers.

While he doesn’t have any personal social media, the official Association of Tennis Professionals website can keep you updated on his stats, activities, and more.

Stefan Edberg has won many awards and distinctions during his career on the tennis court.

While all of his accomplishments have been impressive, some stand out over the rest for their prestige and importance.

Here are some of Stefan Edberg’s greatest career achievements:

Stefan Edberg has accomplished a lot during his career, and these awards have been some of his most significant. Like Anna Kournikova, he has certainly earned a number of impressive distinctions.

It is likely that, had he continued playing longer, he would have won even more accolades, which would have helped him stand out even more.

How Does Stefan Edberg Spend His Money?

Although Stefan Edberg has enough money to live in any of the most expensive cities in the world, he instead chooses to live a relatively quiet life.

In 2000, Edberg and his wife, Annette, briefly lived in Kensington, London, but have since retired to Vaxjo, in southern Sweden.

Vaxjo is a relatively small town with only a population of 65,000, and his apartment is situated on the same street as his equity management company’s office.

Unlike many wealthy tennis players, Edberg also isn’t diving around in one of the most expensive cars in the world, instead preferring a modest Staid Volvo.

Stefan Edberg’s career has been filled with many memorable moments.

However, some points stand out more than others for their overall impact on his career.

Here are some of the best highlights of Stefan Edberg’s career:

While these are only a few of Edberg’s greatest milestones, they are the most significant.

He may not have earned as much renown as Andre Agassi, but he certainly has enjoyed many important moments during his career.

Stefan Edberg made quite a name for himself in the tennis world, and his legacy still lives on today.

During his time on the court, Stefan learned to take each win in stride and use his abilities to become extremely wealthy.

Here are our favorite quotes from Stefan Edberg:

There is a lot that we can learn from Stefan Edberg and his incredibly successful tennis career.

Now that you know all about Stefan Edberg’s net worth, we can take a closer look at what he can teach us about reaching our own goals.

Here are some of the best success lessons to learn from Stefan Edberg:

1. You Win Some, You Lose Some

If you want to be successful, you have to learn to accept that you won’t always find victory in all of your ventures.

However, this should never stop you from picking yourself up and trying again until you succeed.

2. Learn From Your Mistakes

Everyone makes mistakes, but you should always use them as a learning experience and not something to spend time worrying over.

All successful people make mistakes, and it is something you will have to accept if you want to join their ranks.

3. Know When To Step Away

Once you’ve reached your goals, it’s always a good idea to keep aiming even higher.

However, you will ultimately need to determine when is the best time to step away and enjoy the fruits of your labor instead of continuously working toward goals.

Stefan Edberg has left a lasting legacy in the world of tennis, and today he is living large, thanks to his talents.

While he retired in 1996, Edberg went on to coach Roger Federer before stepping back from tennis entirely to enjoy a quiet life.

Make sure to check back often so that you won’t miss any changes to Stefan Edberg’s wealth and income.

As of February 2023, Stephan Edberg’s net worth is estimated to be $25 Million.

What do you think about Stefan Edberg’s net worth? Leave a comment below.

Bill Guerin made millions as a professional ice hockey player and coach, becoming fabulously wealthy from his time in the NHL.

What is Cameron Jordan's net worth? Introduction  As of ,...