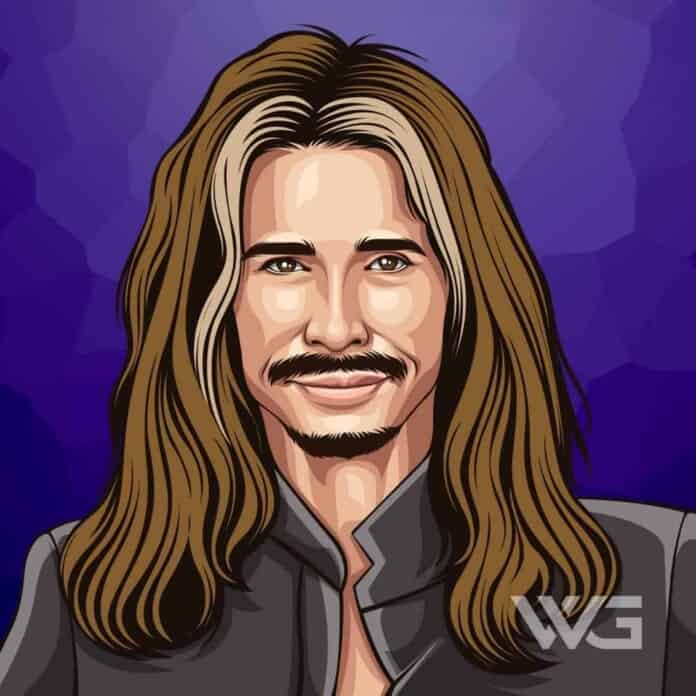 What is Steven Tyler’s net worth?

Steven Tyler is an American singer, songwriter, actor, and former television judge. Tyler is best known for being the lead singer of the band Aerosmith, in which he also plays piano, harmonica, and percussion.

He is known as the ‘Demon of Screamin’ due to his high screams and his wide vocal range. Tyler is considered to be one of the best singers in the world.

Steven Tyler was born on the 26th of March, 1948, in Manhattan, New York. Tyler is one of the two children of Susan Ray, a secretary, and Victor Tallarico, a classical musician and music teacher.

He attended the Roosevelt High School and later attended the Leonard Quintano for Young Professionals School. Tyler has always loved music from a young age and was the drummer and singer in a number of rock and roll bands during his youth.

Steven Tyler met his future band mates, Joe Perry and Tom Hamilton at a local rock show in 1969. The trio decided to form a band and two other musicians were recruited and the Aerosmith was formed in 1970. Aerosmith signed a record deal with Columbia Records in 1972 and released their self-titled album in 1973.

The band, however, began to fall apart by the end of the decade of the 1970s. Tyler and Perry both developed drug problems that threatened their careers. Tyler had a motorcycle accident in 1980 which furthered his decline.

After being inactive for years, Aerosmith reunited for a comeback concert tour ‘Back in the Saddle Tour’ in 1984. Realizing that they were jeopardizing their careers because of their drug addiction, all the members decided to check into rehabilitation in 1986.

Their next album ‘Pump’ was out in 1989. The album was highly successful and spawned three Top 10 singles on the Billboard Hot 100. The songs dealt with issues like incest, murder, alcoholism, and drug abuse.

Aerosmith continued to record into the 1990s though they were no longer as prolific as before. Their album ‘Get a grip’ became the band’s best selling album ever, and people all over the world listened.

Aerosmith kept busy throughout the first decade of the new millennium by touring, performing live shows and also by releasing albums. Their albums for the decade included: ‘Just Push Play’ (2001) and ‘Honkin’ on Bobo’ (2004). The band’s latest album is ‘Music from Another Dimension’ (2012).

Here are some of the best highlights of Steven Tyler’s career:

“It’s cool when I meet young guys from other bands who say how much an impact Aerosmith has had on them and how much they like me.I’ll give ’em that ‘C’mon you don’t mean that’ routine, but in my heart, I know where they’re coming from. If I had grown up in the ’70s and was into rock n’ roll, I know the kind of impact Aerosmith would have had on me. I know the kind of impact that Elvis and Jagger had on me, and while I’m not comparing myself to those guys, I can relate.” – Steven Tyler

“I’m not sure about the selling part, but I’ve always found that the things I’ve worn on tour have moved over to what people wear every day. Sometimes the things I wore in the beginning before I had money were things I put together.” – Steven Tyler

“A lot of bands have managed to borrow parts of our style for their music. That’s fine with me because we’ve borrowed from people like the Stones. But we don’t want to sound like we’re copying anyone, including ourselves, so we’re moving on.” – Steven Tyler

“A lot of my books deal with very controversial issues that most people often don’t want to talk about, issues that, in my country, are more likely to get put under the carpet than get discussed. And when you talk about moral conundrums, about shades of gray, what you’re doing is asking the people who want the world to be black and white to realize instead that maybe it’s all right if it isn’t. I know you’ll learn something picking up my books, but my goal as a writer is not to teach you but to make you ask more questions.” – Steven Tyler

“Now I’m way into suits that I can put on whether I took a shower or not, and wear barefoot and paint my toes black or whatever color the suit is. It’s very cool to wear suits like that. Roll up the sleeves and just say yee-haw.” – Steven Tyler

Now that you know all about Steven Tyler’s net worth, and how he achieved success; Let’s take a look at some of the most inspirational lessons we can learn from Steven Tyler:

There are so many people that are walking around so angry. And it’s like, do you really want to waste the short amount of time you have here been miserable?

Be grateful for everything that went wrong, we will always learn from it.

Life is short, be happy while you can, and ignore the negative.

How much is Steven Tyler worth?

Steven Tyler’s net worth is estimated to be $150 Million.

How old is Steven Tyler?

How tall is Steven Tyler?

Steven Tyler is considered to be one of the best singers in the world. Tyler is best known for being the lead singer in the band Aerosmith. The band has sold millions of copies worldwide, and they have collaborated with some of the best artists in the world.

What do you think about Steven Tyler’s net worth? Leave a comment below.