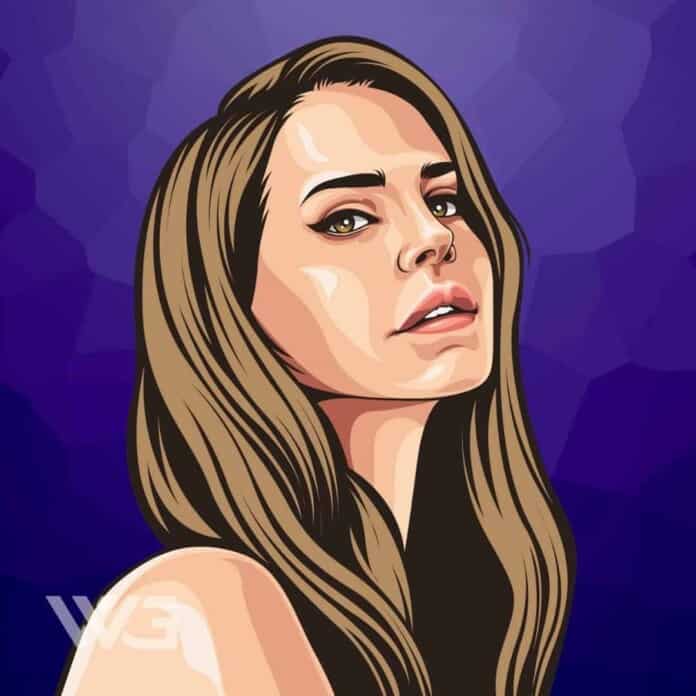 What is Lana Del Rey’s net worth?

As of February 2023, Lana Del Rey’s net worth is approximately $30 Million.

She is regarded to be one of the best female singers of all time. Her music has been noted by critics for its stylized cinematic quality; its preoccupation with themes of tragic romance and glamour.

Elizabeth Woolridge Grant was born on the 21st of June, 1985, in New York City. She grew up in rural Lake Placid in New York, where she attended a Catholic elementary school.

Grant developed an interest in music as a child and began signing in her church choir. She also wrote country songs. However, as a teenager, she suffered from rampant alcohol abuse, which made her parents send her to Kent School.

In 2005, Lana Del Rey registered a CD of originals under her birth name with the US Copyright Office, and ended up with an album named ‘Sirens.’ However, it went unreleased.

A few years later, she created her YouTube channel. In 2011, she uploaded the videos for the songs ‘Video Games’ and ‘Blue Jeans’ which gained huge popularity over the internet.

Her debut album ‘Born to Die’ was officially released on January 2012. It sold 3.4 million copies in 2012, eventually becoming the fifth-best selling album of the year.

Del Rey’s next album ‘Ultraviolence’ was released by UMG records on June 2014. With hit singles such as ‘Cruel World’, ‘Ultraviolence’, ‘Shades of Cool’, and ‘Brooklyn Baby’ the album debuted at the first position in the US Billboard 200.

Her next album ‘Honeymoon’ was released by Polydor Records and Interscope Records in September 2015. Like her previous work, it was also an instant hit and debuted at number two in the US Billboard 200.

Here are some of the best highlights of Lana Del Rey’s career:

“New York’s architecture alone is enough to inspire a whole album. In fact, that’s what happened at first – my early stuff was mostly just interpretations of landscapes.” – Lana Del Rey

“I’d been sick on tour for about two years with this medical anomaly that doctors couldn’t figure out. That’s a big part of my life: I just feel really sick a lot of the time and can’t figure out why. I’d gotten these shots in Russia, where we’d just been. It was just heavy. It’s just heavy performing for people who really care about you, and you don’t really care that much about yourself sometimes.” – Lana Del Rey

“My understanding of God has come from my own personal experiences. Because I was in trouble so many times in New York that if you were me, you would believe in God too.” – Lana Del Rey

“I’ve made videos since I was seventeen I was originally discollecting vintage hmmm… footages from different archives and setting moving pictures to classical music clips that meant a lot to me. Maybe there were places I have been where nice things have happened. I had a vision of making my life a work of art and I was looking for people who also felt that way.” – Lana Del Rey

Now that you know all about Lana Del Rey’s net worth, and how she achieved success; let’s take a look at some of the lessons we can learn from her:

1. Sexuality Isn’t Something to Shy Away From

It’s no secret that Lana isn’t afraid to talk about her sex life. Whether it’s in interviews and especially in her music, she sure is not shy.

Everyone knows that without girlfriends, life drags. Lana always talks about adventures with friends, and just frankly doing things girls do.

3. Love Can Be Awesome

It’s no secret Lana talks about how relationships and boys can be a hassle, but she sheds some light on the good stuff as well. She openly talks about how great love can actually be.

How much is Lana Del Rey worth?

Lana Del Rey’s net worth is estimated to be $30 Million.

How old is Lana Del Rey?

How tall is Lana Del Rey?

What do you think about Lana Del Rey’s net worth? Leave a comment below.