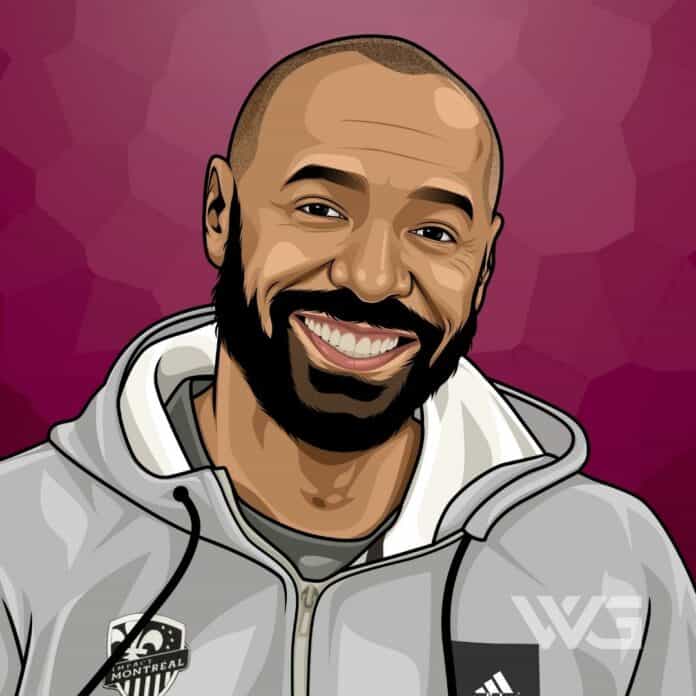 What is Thierry Henry’s net worth?

Thierry Henry is a retired professional soccer player and was considered the best striker in the Premier League while playing for Arsenal.

During his career, he scored over 228 goals, which was more than anybody else in Arsenal’s history.

As one of the greatest strikers of all time, Henry was in great demand and eventually contracted to play for one of the richest clubs in Europe, Barcelona F.C.

After a successful run in La Liga, he transferred to the Major League Soccer side, the New York Red Bulls, for 5 memorable seasons.

He was born into a low-income household, but even in his poor neighborhood, they still had great football facilities. Thierry played football from a young age and had already made his mark at the age of seven.

His father motivated him when it came to football, as Thierry didn’t particularly like the sport at first. After a short time, it became clearer that Thierry was a natural superstar and incredibly talented at football.

At the age of 13, he joined the junior team in Les Ulis. Not long after, he played for an Under-15 team at Viry-Chatillon.

Unfortunately, once Thierry turned 14, his parents separated, and his mother transferred young Thierry to the Alexander Fleming School.

He started to spend more time playing soccer and, despite all the chaos of moving, was accepted into the French Football Federation’s Clairefontaine Academy.

The first break in his football career was when he signed an apprentice contract with Monaco.

Thierry’s first professional appearance was in 1994 when he appeared in a match against Nice, which his team lost. Two years later, in 1996, he became one of the youngest members of the French National side.

While still playing for Monaco, he helped lead the French team to victory at the 1998 FIFA World Cup. He played with many legendary players while playing with Monaco and scored a total of 20 goals.

He started as a left-wing but soon became a striker where he proved his true goal-scoring talents lay. Thierry blossomed under Arsene Wenger and in no time, became the team’s main goal scorer.

But the magic didn’t end there and his 2003 to 2004 season ended with him scoring a total of 30 goals. He is seen as one of the greats, joining Mesut Ozil and  Ashley Cole as the fan’s favorite players.

During that same season, Thierry’s team was titled “The Invincibles”, for their impressive unbeaten record that had first been won by Preston North End 100 years before. He has played with some of the greats of the modern game, such as Lionel Messi and Cristiano Ronaldo and is rated alongside them for talent.

Henry captained his side during the UEFA Champions League final and the World Cup victory in 2002, before moving to New York, where he signed a contract to play with the NY Red Bulls.

After 4 successful years, he retired in December 2014, taking a position with Sky Sports as a commentator.

Over the course of Thierry Henry’s career, he played for some of the richest clubs in soccer, earning impressive wages as well as title bonuses.

He has become one of the most recognizable faces in soccer and young players still look up to him as a star they’d like to emulate.

Following his successful career on the pitch, Henry went on to commentate, providing a player’s perspective for the viewers at home.

He has recently added club owner to his name and the players at the Italian club, Como, will no doubt learn a lot from his vast footballing experience.

After being one of the most highly-paid players in MLS history, surpassing even David Beckham, Henry made sure that his fortune was well-looked after.

His net worth has steadily increased over the years as he has carefully invested his fortune in growth assets.

Here’s a breakdown of Thierry Henry’s annual net worth:

With his recent acquisition of shares in Como, an Italian Serie B club, Henry is sure to see a great return on his investment and further growth in his portfolio.

The couple had a daughter named Tea, before divorcing in 2008. Since his divorce, Henry has found love with Bosnian model, Andrea Rajacic.

Henry tends to stay out of the limelight when off the pitch, so there’s little known about his family and lifestyle.

From early on, it was apparent that Thierry Henry was destined for great things on the soccer pitch. However, it took time for him to adapt to the more physical nature of the English Premier League. But when he did, he recorded a record-breaking 26 goals in his first season at Arsenal.

Here are some of the more memorable moments from Thierry Henry’s career:

After playing his last match for Arsenal, Thierry Henry scored more goals and played better football overall than any other player to represent the club, including Ian Wright.

Going on to Barcelona, arguably one of the most daunting clubs in the world, he had to learn a new style of play, flourishing under the coaching of Pep Guardiola. While his goals were not as prolific as when he was at Arsenal, he scored some of his best goals while playing for the Catalonian giants.

How Does Thierry Henry Spend His Money?

Thierry has had many investing ventures, including investments in movies, and is expected to produce multiple French TV series for Netflix. He has also invested in some of the most expensive cars in the world, such as his Rolls-Royce and an Audi.

Real estate rates high on his list of investments, buying an apartment in New York in 2010 for $14.9 million.

He has had endorsements from a variety of companies, including Nike shoes, Renault cars, and Gillette razors, but the contract with Gillette came to an end in 2010.

To everyone’s surprise, it was revealed that Thierry had paid 8 million Euros in his divorce settlement.

Thierry Henry provided some of the most thrilling soccer entertainment during his career. His goals are legendary and his speed and agility on the ball are as good as any star at the time or since.

Here are some of the best highlights of Thierry Henry’s career:

Not only was Theirry Henry an impressive player, but he is also shaping up to be a winning coach as well.

Only time will tell if he is to join the all-time great coaches as well, but in the meantime, he’s enjoying his time away from the pitch.

Henry started as a poor child who had a dream of becoming a top soccer player. When he reached his goal, he obliterated it by becoming one of the all-time great goal-scorers of the modern era.

Here are our favorite quotes from Thierry Henry:

Thierry Henry was always striving to do better, with more speed, more accuracy, and better recovery.

Along the way, he discovered an inner strength and the ability to look critically at his own performance and find ways to improve.

Now that you know all about Thierry Henry’s net worth, here are some of the best success lessons to learn from Thierry Henry:

Thierry does not believe in mistakes but rather thinks of them as lessons.

2. There Is More To Winning Than Meets The Eye

He is never in it just for the win, it is all about achieving goals along the way and working incredibly hard to achieve the best result.

3. Follow Your Dream For Yourself, Not For Anything Or Anyone Else

Thierry may have found his passion for football because of his father, but it was Thierry who decided to follow his passion and not let others affect it.

His talents as a goal scorer are out there for all to see, and he will forever be known as one of the greatest strikers of all time. Having worked his way out of poverty, he has become an inspiration to all.

Henry is a legend in soccer and his skills and drive are being passed on to the next generation of players through his coaching and club ownership. With his incredible technique and natural superstar persona, it is no wonder that Thierry Henry reached the top.

What do you think about Thierry Henry’s net worth? Leave a comment below.