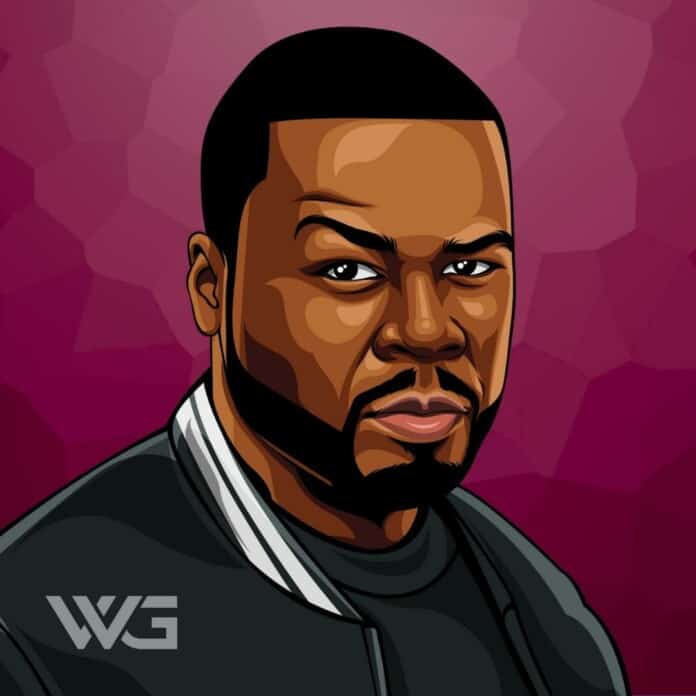 American rapper and businessman 50 Cent has earned over $250 million throughout his career from chart-topping albums and singles, as well as other business ventures.

His extravagant lifestyle has seen his fortunes drop, with the star even submitting a bankruptcy filing in July 2015.

After his mother died when he was eight years old, he was raised by his grandmother and began dealing drugs when he was twelve.

After being caught trying to bring guns and drugs into school, Jackson was arrested in 1994 and eventually served six months in a boot camp.

Around this time, Jackson began to rap, releasing the underground rap single “How To Rob” in 2000.

After being shot and hospitalized, allegedly by Mike Tyson’s bodyguard, 50 Cent signed a publishing deal with Columbia records, kick-starting his professional rapping career.

50 Cent’s discovery by Eminem in 2002 and subsequent introduction to Dr. Dre launched him into the spotlight with a £1 million record deal.

His debut album, “Get Rich Or Die Tryin” debuted at number 1 on the Billboard charts and led to a million copies sold in the first four days.

He followed his first album with “The Massacre”, and subsequent albums have earned him various music industry awards and nominations.

The release of additional albums including “Curtis”, “Before I Self Destruct”, and “Street King Immortal” have helped 50 Cent achieve a combined sales of 21 million units.

Other business ventures outside the music industry

In addition to his record sales, 50 Cent has earned money through his record label, G-Unit records.

He also launched a G-Unit clothing company, as well as a boxing promotion company called The Money Team, which was founded in 2012.

50 Cent has branched out into acting and has appeared in movies with superstars such as Robert DeNiro and Al Pacino, after making his on-screen debut in ‘Get Rich Or Die Tryin’.

After negotiating a minority stake in Vitamin Water in return for being their spokesman, Coca-Cola acquired the company for $4.1 billion.

This deal earned the rapper more money than any of his albums, reportedly netting the star an impressive $100-150 million.

50 Cent has earned a significant amount of his money from record sales, although the deal with Coca-Cola has the biggest impact on his income. Here’s how his earnings shape up over the last few years:

A review of 50 Cent’s net worth on an annual basis shows just how severely declaring bankruptcy impacted his value. Here’s his net worth over time from 2015 to the present day:

50 Cent is known for his public feuds with his former girlfriend Shaniqua Tompkins, with whom he has a son named Marquise Jackson.

Tompkins attempted to sue 50 Cent for $50 million, although the suit was later dismissed.

In 2016, an incident in an airport went viral when 50 Cent was filmed accusing a janitor with autism of being under the influence.

While the parents of the teenager wanted to sue the rapper, they settled for a donation of $100,000 to the charity Autism Speaks.

50 Cent has been nominated for a long list of awards, many of which he eventually won. Some of the awards he’s won include:

How Does 50 Cent Spend His Money?

With his impressive earnings over time, 50 Cent has spent his money on some truly lavish items.

Whilst much of his income has gone to various smart investments in the past, 50 Cent’s no stranger to mansions and supercars.

In 2003, he made the news when he purchased Mike Tyson’s old mansion, which featured 21 bedrooms, a gym, casino, and nightclub, for $4.1 million.

50 has always been interested in cars and has built up quite a collection over the years, from manufacturers such as Lamborghini, Ferrari, and Rolly Royce.

One of his most unique car purchases is a custom Versace-wrapped Lamborghini Aventador. You know… the one Snoop Dogg went for a joyride in.

“Every negative is a positive. The bad things that happen to me, I somehow make them good. That means you can’t do anything to hurt me.” – 50 Cent

“You shouldn’t throw stones if you live in a glass house and if you got a glass jaw, you should watch yo mouth: cause I’ll break yo face.” – 50 Cent

“Behind me is infinite power. Before me is endless possibility, around me is boundless opportunity. My strength is mental, physical and spiritual.” – 50 Cent

If you enjoyed these quotes, here are some more inspirational 50 Cent quotes here.

5 Rules for Success from 50 Cent

Now you know all about 50 Cent’s net worth, success story, and early life, let’s talk about some of his favorite rules for success. Here are 5 success lessons we can all learn from 50 Cent:

Hard work is obviously one of the most important components for success, regardless of what it is you want to achieve. If you’re not putting in hard work, you’re not going to become successful.

50 Cent once said that “sleep is for those people who are broke, I don’t sleep”. He works hard, and he’s not going to let himself be beaten by somebody else, just because he was slacking.

By ‘trimming the fat’, I’m talking about removing the negative and un-supportive people from your life. These people will cost you your success if you let them get into your head, and start controlling your life.

50’s trimmed his fair share of fat during his lifetime.

Particularly when it comes to the rap game, you need to make sure you have no fear. People wrote ‘diss tracks’ to try and through Jackson of his game, including Jay-Z at one point in time.

However, he saw it as positive publicity, and was still focused on where we wanted to go.

4. Don’t Be Ashamed of Your Past

I think the things you go through make you who you are. So I don’t regret those things. I don’t regret ’em because I don’t think I’d be who I am today. If I wasn’t exposed to those situations, if you asked me what I, Those are unfortunate situations that I’ve had to experience.

That’s a special kind of high that you’d get addicted to and you’ll chase it for the rest of your actual career. When you feel that feeling whether it’s your first album, second album, third album, just a single.

View our larger collection of success lessons from 50 Cent!

With an illustrious career and multiple studio albums as a professional rapper spanning decades, 50 Cent’s fame has been heightened by winning multiple American music awards.

We’ll update this article to include the latest information as 50 Cent continues to produce music and act in movies, so make sure you check back in the future.

What do you think about 50 Cent’s net worth? Leave a comment below.