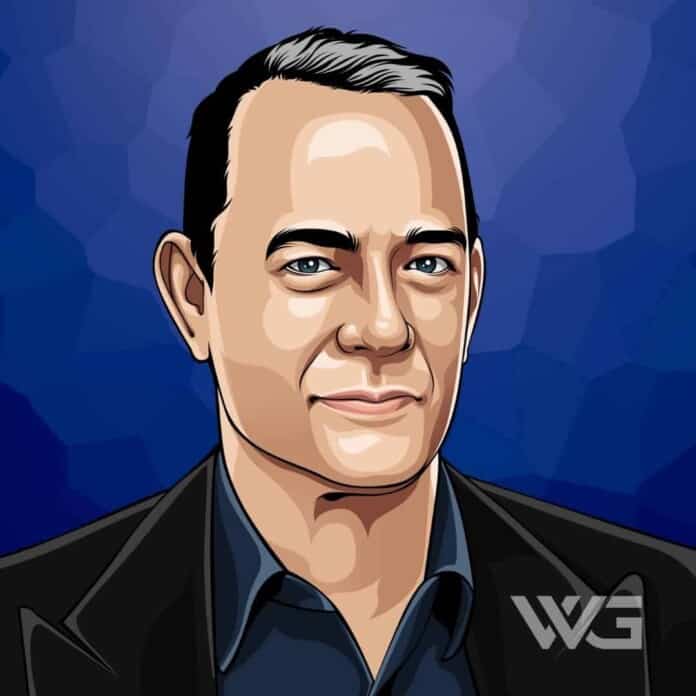 What is Tom Hanks’ net worth?

Thomas Jeffrey Hanks was born in Concord, California on the 9th of July, 1956. Hanks’ mother was of Portuguese descent and his father had English ancestry. His parents divorced in 1960 and Tom went to live with their father.

In his childhood, Hanks often moved, and by the age of 10, he had lived in 10 different houses. Hanks studied theater at Chabot College in California. He told New York magazine in 1986:

“Acting classes looked like the best place for a guy who liked to make a lot of noise and be rather flamboyant. I spent a lot of time going to plays. I wouldn’t take dates with me. I’d just drive to a theater, buy myself a ticket, sit in the seat and read the program, and then get into the play completely. I spent a lot of time like that, seeing Brecht and all that.”

Tom Hanks began his career as an actor in 1978 when he starred in ‘The Two Gentlemen of Verona’ which he won Best Actor for. In 1978, he acted in various summer productions of Shakespeare’s plays and in the winters he worked for a theater company. He made his first movie debut in 1980 when he starred in ‘He Knows You’re Alone’.

The following year, Hanks got a chance to perform in the television sitcom ‘Bosom Buddies’ which earned him critical acclaim. His performance as a 13-year old boy trapped in the body of a 35-year old man in Penny Marshall’s ‘Big’ (1988), was lauded and he soon began appearing in blockbuster hits.

Hanks lost 37 pounds for the film and his performance won him an Oscar and an MTV Movie Award.

In 1994, Hanks played the leading role as Forrest Gump which he won the Academy Award for his role in the movie.

In 1988, he teamed up with director Steven Spielberg for his first time where he performed a challenging role in ‘Saving Private Ryan’ that got him his fourth nomination for the Academy Award for Best Actor.

Hanks also caught attention when he was cast in ‘Bad of Brothers, an HBO mini-series and in ‘A Tribute to Heroes’.

A few years later, he played the role of the famed Robert Langdon in the sequel of ‘The Da Vinci Code’ the second movie ‘Angels and Demons’. He was the executive producer of the 2012 film ‘Game Change’ which is about the 2008 presidential campaign.

Here are some of the best highlights of Tom Hanks’ career:

“Some people are cowards… I think by and large a third of people are villains, a third are cowards, and a third are heroes. Now, a villain and a coward can choose to be a hero, but they’ve got to make that choice.” – Tom Hanks

“There isn’t any great mystery about me. What I do is glamorous and has an awful lot of white-hot attention placed on it. But the actual work requires the same discipline and passion as any job you love doing, be it as a very good pipe fitter or a highly creative artist.” – Tom Hanks

“I love what I do for a living, it’s the greatest job in the world, but you have to survive an awful lot of attention that you don’t truly deserve and you have to live up to your professional responsibilities and I’m always trying to balance that with what is really important.” – Tom Hanks

“My wife keeps on telling me my worst fault is that I keep things to myself and appear relaxed. But I am really in a room in my own head and not hearing a thing anyone is saying.” – Tom Hanks

Now that you know all about Tom Hanks’ net worth, and how he achieved success; let’s take a look at some of the lessons we can learn from him:

You will find love and then, and sometimes the love gets lost. Don’t allow yourself to get buried in self-pity or to feel unlovable. You will fall in love again, stay alert for opportunities like that. Try to make a new friend and find a lover.

Always have hope, even in the darkest times. No matter how bad a situation is, there is always good to be found. Look for the positive instead of the negative and you’ll find life challenges that will become easier to deal with.

Advocate for yourself because life isn’t always fair. No one can afford to be helpless, so don’t let people take advantage of you. Learn how to be persistent, seize every opportunity and go after what you want.

How much is Tom Hanks worth?

Tom Hanks’ net worth is estimated to be $400 Million.

How old is Tom Hanks?

How tall is Tom Hanks?

Tom Hanks is the greatest actor of all time. He has influenced many by his talented performances in films including ‘Forrest Gump’, ‘The Green Mile’ and ‘The Da Vince Code’.

It’s easy to say that Hanks’ net worth will remain a remarkable icon in the film industry.

What do you think about Tom Hanks’ net worth? Leave a comment below.