Conor McGregor is a famous MMA and UFC fighter who just recently made his Professional Boxing Debut against the one and only Floyd Mayweather.

Conor was knocked out by Mayweather, but don’t let that distract you from his success. After the fight, McGregor is now the richest MMA fighter in the world with a net worth of $85 million.

McGregor is perhaps holds your stereotypical attitude of a successful fighter: Full of inner confidence. We can’t deny McGregor’s work ethic and that of similar fighters, which is what makes him perfect to look up to as a role model and for inspiration.

If you’re a dreamer, or perhaps you’re even a fighter, then take a look at these awesome quotes.

1. “Doubt is only removed by action. If you’re not working then that’s where doubt comes in.” – Conor McGregor

2. “There’s no talent here, this is hard work. This is an obsession. Talent does not exist, we are all equals as human beings. You could be anyone if you put in the time. You will reach the top, and that’s that. I am not talented, I am obsessed.” – Conor McGregor

3. “I have never encountered a winner that held hate towards something.” – Conor McGregor

4. “It’s not really that much big of a deal – you brush it off and you come back. Defeat is the secret ingredient to success.” – Conor McGregor

6. “At the end of the day, you’ve gotta feel some way. So why not feel unbeatable? Why not feel untouchable?” – Conor McGregor

7. “I keep having vivid dreams of success. Then it’s time to sleep.” – Conor McGregor

8. “Failure is not an option for me. Success is all I envision.” – Conor McGregor

11. “All that matters is how you see yourself.” – Conor McGregor

12. “Do I hate my opponents? How can I hate someone who has the same dreams as me?” – Conor McGregor

13. “I was always a dreamer, and my first ambition was to be a footballer. I’d be out in the field doing drills after it got dark at night. So I had that passion to get somewhere and a drive to do something. I did love football and was always more into playing it than watching it. When I found combat sport, however, it just took over. It’s non-stop now.” – Conor McGregor

14. “One king gets old, then a young gorilla comes up and kills him, and takes everything he owns.” – Conor McGregor

15. “Approach everything with an open mind, with a learning mind. You will never stop learning as long as you keep the mind-set that everything works, because everything does work. There’s a time and a place for every single move. If you work on it enough, it will work.” – Conor McGregor

18. “Look out for those who look out for you. Loyalty is everything.” – Conor McGregor

19. “There’s people that focus on the game and forget about the art. There’s that specific individual that can do both.” – Conor McGregor

24. “What defines us is how well we rise after falling.” – Conor McGregor

25. “Always look to learn. Learning something new is a great feeling. The feeling of progress.” – Conor McGregor

27. “I am cocky in prediction. I am confident in preparation. But I am always humble in victory or defeat.” – Conor McGregor

29. “Nothing good ever comes from worrying or sitting there feeling sorry for yourself… keep positive and keep pushing on and things will turn good.” – Conor McGregor

31. “Don’t hide nothing. Those who mind don’t matter, and those who matter don’t mind. Don’t care about what other people thing. Be yourself: you are what you are.” – Conor McGregor

32. “You might win some, you might lose some. But you go in, you challenge yourself, you become a better man, a better individual, a better fighter.” – Conor McGregor

35. “I’m not going to get somewhere and say, ‘OK, I’m done.’ Success is never final; I’ll just keep going. The same way as failure never being fatal. Just keep going. I’m going to the stars and then past them.” – Conor McGregor 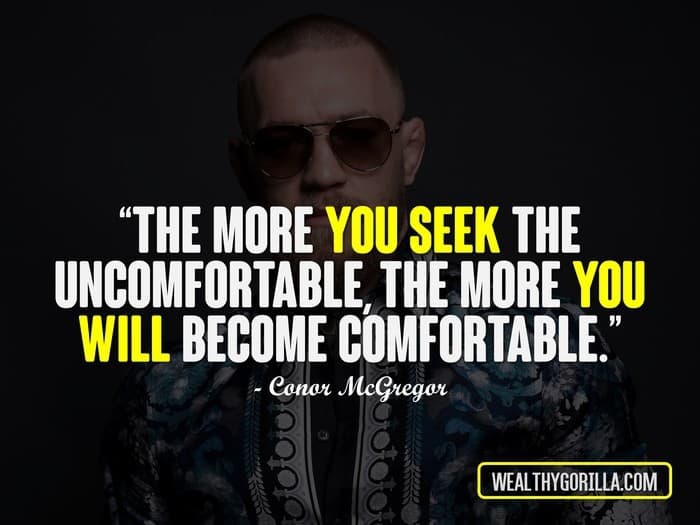 Thanks for checking out these powerful Conor McGregor quotes; an incredible UFC fighter who we can all learn a lot from. Don’t forget to share them on social media with your friends and family.

Which are your favorite Conor McGregor quotes? Leave a comment below.