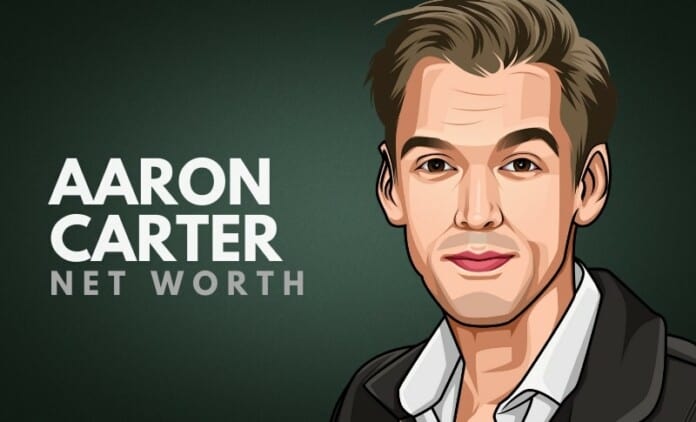 What is Aaron Carter’s net worth?

At his time of passing, Aaron Carter’s net worth was approximately $400 Thousand.

Carter first came to fame as a pop and hip-hop singer in the late 1990s, establishing himself as a star among pre-teen and teenage audiences during the first years of the 21st century.

Aaron Carter was born on the 7th of December, 1987, in Tampa, Florida. He had four siblings, three sisters, and one brother.

He attended the Frank D. Miles Elementary School, as well as the Ruskin school in Florida. He had a great enthusiasm for music from an early age and started his career at the tender age of seven.

Carter began his career as the lead singer of ‘Dead End’ which was a local band formed by members of a rock school in Tampa. However, their interests conflicted as Carter was more interested in pop while the others preferred alternative rock.

His first solo appearance was made when he was only nine years of age. It was an opening for the ‘Backstreet Boys’ in Berlin, which took place in March 1997. His first single ‘Crush on You’ was released the same year.

His next work ‘Another Earthquake’ was released in 2002. It was a mild success, though not as successful as his previous works. It also was Aaron’s final studio album under the label of Jive Records.

In 2011, it was announced by Johnny Wright, Carter’s manager, that he was in a treatment facility for emotional and spiritual healing. He spent a month at a rehab center named Betty Ford Center in California after which he started performing normally again.

On November 5th, 2022, Carter was found dead in the bathroom of his California home, at just 34 years old.

At the time of his death, Aaron Carter’s net worth was approximately $400 Thousand.

Here are some of the best highlights of Aaron Carter’s career:

“Love shouldn’t be about jealousy or anything like that. It should be about commitment and being able to trust that person. If you can’t have that from the get-go, there’s a problem.” – Aaron Carter

“When I was 6 years old, I was in a rock band that was horrible called ‘Dead End.’ The name kind of described us. People liked us; we would go and perform at coffee houses and stuff.” – Aaron Carter

“I was singing in a mall, and I picked a girl to come up on stage with me. As I was grabbing her hand, I fell off the stage. It felt like I was in the air forever, flying like Superman.” – Aaron Carter

“Music is something that always lifts my spirits and makes me happy, and when I make music I always hope it will have the same effect on whoever listens to it.” – Aaron Carter

“My favorite thing about being famous… it’s not really as big of a deal as everybody says it is. Being on the road is tough, doing interviews, and all the stuff. It’s still pretty tough.” – Aaron Carter

Now that you know all about Aaron Carter’s net worth, and how he achieved success; let’s take a look at some of the best lessons we can learn from him:

1. Life Is A Rollercoaster

Plain and simple. Life is filled with highs and lows. Just because something is seeming to go against you today, doesn’t mean that tomorrow will not bring successes you did not plan for either.

2. You Learn How To Push Yourself

Try to push yourself further than you feel you need to. You will not always succeed. But the trying and the perseverance will make you tougher and more likely to succeed in the future.

3. Creating a Process Works Better Than Setting a Goal

A process changes the way you behave. It becomes a routine. A goal is fleeting and subject to change as you redefine your goals.

How much was Aaron Carter worth?

Aaron Carter’s net worth was estimated to be $400 Thousand.

How old was Aaron Carter when he died?

How tall was Aaron Carter?

Aaron Carter was a popular American pop and hip-hop singer. His first album ‘Aaron Carter’ became one of the top ten in some countries of Europe. Carter also worked on television shows such as ‘Liberty’s Kids’ as well as on films such as ‘Fat Albert.’

At his time of passing, Aaron Carter’s net worth was approximately $400 Thousand.

What do you think about Aaron Carter’s net worth? Leave a comment below.